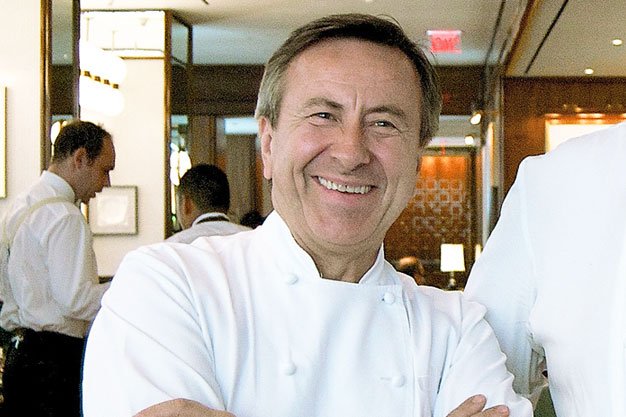 Daniel Boulud is ready to pour some joie de vivre back into Cafe Boulud (See review).

The new, more laid-back Boulud, which opened Thursday, September 10 (just in time for TIFF), is still very much an upscale French restaurant. But when the decision was made to overhaul Boulud’s signature eatery at the Four Seasons in Yorkville, the celebrated French-born, New York City-based chef sought to create a menu that evoked fond memories – whether of his youth near Lyon, his adult life in New York or his years spent circling the globe expanding his restaurant empire.

“I don’t want to have a global approach, but more of an emotional tie to dishes,” says Boulud at a table tucked into a quiet nook in the cozy new room.

The absence of that human touch and disappointing fare sank the bistro among critics on its 2012 debut. The icy, rarefied room was a particularly poor fit for this city, which has cooled on fine dining in favour of emptying its collective wallet in raucous rooms with splashy cocktails and shareable dishes.

“Being a hotel, I think we were a little disconnected from… the people who want quality and great service but a little bit less, maybe, ‘importance’ to the whole experience,” he says. “We’re just trying to create a little more friendly approach.”

The second-floor space above DBar is now unrecognizable thanks to a $2 million renovation at the hands of designer Martin Brudnizki (of Drake One Fifty.)

“We have a British designer interpreting a French brasserie or French cafe, so I think that really gives it a spin,” Boulud says.

Warm wood tables are flanked by smushy bucket chairs in crinkled cognac leather and banquettes in jade green, a signature colour in the old brasseries, with flashes of metal for a luxurious air.

The menu matches, with nostalgia and comfort dolled up to jibe with modern tastes. Classic French family fare, executed by chef de cuisine Sylvain Assie, is augmented by dishes specific to Boulud’s own biography.

One of the first dishes he presents to our small gathering of media folk is a bowl of beef pho. “For the first 12 years I worked in New York, my chef de cuisine was Cambodian, and he would constantly cook for our staff,” he explains. “We had a big, nice consomme of beef, and he would make me pho.”

Boulud’s massive bowl of noodles and tender beef ($16) is a-swim in a broth that balances Vietnamese spicing with a complex earthiness that’s purely French.

“I don’t think Toronto needed Daniel to make a pho,” he jokes. “At the same time, the juxtaposition of things – I’m happy to play with that.”

A kale starter is “more my American side. The kitchen treats the de rigueur green to a sear on a grill for a meaty flavour, then tosses it with a rainbow of Middle Eastern spices and tops it with crispy carrot chips.

The mains are by and large pure France, thanks in part to the kitchen’s centrepiece, a Rotisol Olympia rotisserie imported directly from the factory in Chelles. Vertical and horizontal spits allow meats, seafood and even grilled pineapple for the dessert menu to cook all at once.

While Boulud is not content to duplicate menus between cities, several standout dishes capitalize on the world-class brain trust Boulud has amassed at his 16 restaurants.

Borrowed from his New York City Mediterranean kitchen, Boulud Sud, is a show-stopping grapefruit givre dessert: Layers of grapefruit sorbet, chewy rosewater loukoum and sesame-citrus marmalade are encapsulated in a grapefruit rind and topped with a Mohawk-like shock of halva shreds. There’s also a classic French souffle lightly dressed up with Grand Marnier and orange creme anglaise the two are vastly different in pedigree and presentation, but both demand to be dug into with glee.

“I think we really wanted to project an up-to-date French comfort food blend with a sort of American energy in the dishes,” Boulud says, before righting himself. “Not American, but Canadian!

“I think it’s current. And Toronto, I think, is a very current city.”