Davida Nemeroff riffs on the promise and alienation of the West 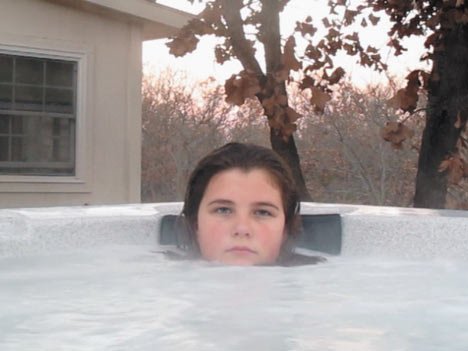 “California” is a place name with associations as wide-open and varied as the state itself. It’s the title of Davida Nemeroff’s new show of photographs and videos and the starting point for a meditation on lived space across North America.

An inkjet-printed orange sunset dominates the entrance, paired with a video of a lone male figure on an escalator. The two images are the visual bookends of a dialectic: the glorious and slightly tawdry promise of the Golden West offset by alienating means of transit. These are followed by an image of roses on a chain-link fence, slightly over-saturated, a piece of photographic kitsch that could have been run off at a local Walmart.

Nemeroff’s lo-fi approach, a form of suburban realism, strains her vision through a deliberately flat and contemporary lens. This comes across in the insistent barking of a dog on a leash in a video that can be heard throughout the space.

In the video Jacuzzi Time, she turns a camera on a 10-year-old girl sitting in a tub in her backyard. “You can look at the camera,” she tells the girl, who uses a series of strategies from playfulness to indifference to discomfort to counter her self-consciousness at being filmed. In much of her work, Nemeroff highlights the risks and vulnerabilities between the camera and the subject.

She obviously wants us to be uncomfortable, and uses a range of subtle techniques to wryly skew the semantics of each image. The result is a feeling of eerie familiarity paired with palpable unease.