Calvin Love at the Drake Underground 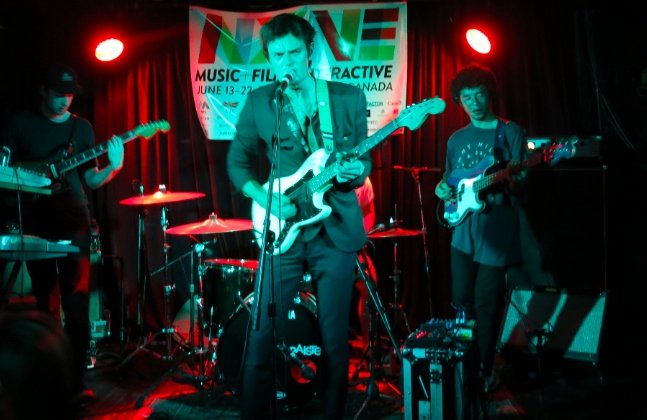 Field Trip Discovery, the concert series brought to you by the folks who put on Field Trip fest every summer, nailed the lineup for their holiday edition, topping the bill with Calvin Love and Michael Rault – two Toronto-based singer/guitarists making retro sounds sound new again.

Love, a recent Edmonton transplant, has stage presence to spare. His electro-rockabilly sound recalls Chris Isaak, the Arcade Fire’s Reflektor album, The Wonders from That Thing You Do! and all sorts of 80s pop. All that said, Love is one-of-a-kind, owning the stage in his spangly silver-sequined jacket (paired with vintage tee), making love to his guitar and punctuating his songs with occasional emphatic yelps. His super-tight three-piece backing band are more than worthy of their charismatic leader, and integral to the overall party sound.

Near the end, Love had the packed Underground’s amorous couples slow-dancing (though the downtempo tunes were more groovy and funky than slow, per se) before he closed out with a big psych-pop banger.

Only small qualms? The vocal reverb was a touch overdone, and Love’s guitar playing – which usually evoked a Hawaiian vacay – occasionally had an over-accentuated twang.

Earlier, Michael Rault – standing off to the side of the stage, oozing cool in his between-song chat – made performing his vintage-sounding tunes seem effortless. Listening, I couldn’t help thinking of laid-back road trips with my parents’ best-of 50s, 60s and 70s tapes, yet Rault and his three-piece band have created something that sounds a little lo-fi and still totally modern.