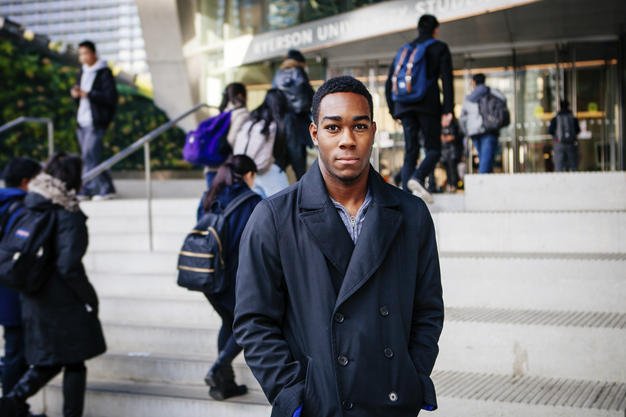 Carter Grant of Students for Life Ryerson says even students who don't agree with the group's pro-life message believe it deserves space on campus.

The election of an outspoken pro-choice prime minister in Justin Trudeau is reigniting the abortion debate on university campuses across the country, including Toronto’s Ryerson University.

Last month, anti-abortion group Students for Life at Ryerson (SFLR) joined a growing list of pro-life campus orgs that have taken their battle for official campus status to court. The group has hired constitutional lawyer Carol Crosson to file suit against the Ryerson Students’ Union (RSU), alleging discrimination and censorship.

SFLR’s suit is backed by the Canadian Centre for Bio-Ethical Reform (CCBR), the Calgary-based pro-life group known for its door-to-door drops of graphic flyers showing aborted fetuses, including a campaign targeting Trudeau during this fall’s election. Crosson works for the CCBR’s newly formed legal department. According to SFLR, it’s raised $20,000 from online donations to pay for legal fees.

Also lending its support to the Ryerson group’s cause is the Justice Centre for Constitutional Freedoms (JCCF), another Calgary-based group that has acted as intervenor in similar court cases. It’s headed by John Carpay, a former provincial director of the Canadian Taxpayers Federation, and supported financially by the Peter and Melanie Munk Charitable Foundation and the Donner Canadian Foundation, among others.

Its list of endorsers includes right-wing pundit Ezra Levant, former PM Stephen Harper’s former speechwriter Michael Taube, and Andrea Mrozek, executive director of the Institute of Family and Marriage Canada (the research arm of Focus on the Family Canada, the Canadian affiliate of the American evangelical Christian organization of the same name).

SFLR, which consists of 15 members and a three-person executive, collected some 30 signatures from campus supporters and provided a sample constitution for the RSU’s review in October 2014. Their request to be recognized as an official school club, which would afford the group access to funds and space on campus, was denied a week later.

An email from the RSU to SFLR cited the university’s policy against financial support for groups that oppose reproductive rights as the reason for that decision. “The Students’ Union as an organization provides services that promote pro-choice, pro-feminist and pro-survivor initiatives,” the email reads in part.

SFLR’s appeal of the decision was unanimously rejected by the RSU board in February.

Says SFLR organizer Carter Grant, a third-year business student at Ryerson’s Ted Rogers School of Management, “When the decision first came out and we were making it known on campus, a lot of students who didn’t necessarily agree with the mandate of our group did agree with the fact that we had a place on campus.”

RSU president Andrea Bartlett says she’s been advised not to comment now that the matter is before the courts. According to a press release issued by CCBR, SFLR was rejected by Ryerson’s Students Groups Committee because RSU “opposes… groups, meetings, or events that promote misogynist views towards woman [sic] and ideologies that promote gender inequity, challenges women’s right [sic] to bodily autonomy, or justifies [sic] sexual assault.”

Carolyn Egan of the Ontario Coalition of Abortion Clinics says, “In a democratic society, everyone has the right to put forward their ideas, and a student grouping or a student who is opposed to abortion clearly has the right to say it. On the other hand, that doesn’t mean that a student government has to provide them with funding to do so, and I think that, in my mind, that’s where the distinction lies.”

In another case involving JCCF, UAlberta Pro-Life, a student club at the University of Alberta, sued school administrators in September for “condoning vandalism, obstruction, disruption, and other violations of Code of Student Behaviour directed at UAlberta Pro-life.”

According to a filed affidavit sworn by UAlberta Pro-Life president Amberlee Nicol, pro-life students repeatedly saw their posters torn down when they tried to advertise their events.

“We want to have the freedom to express our views, the same as any other group,” Nicol told U of A’s campus newspaper, The Gateway. “Unfortunately, the university has failed to protect our expression rights.”

At the University of Victoria, student-run pro-life group Youth Protecting Youth filed a lawsuit against its students’ society in 2010 after being denied funding and having its official club status revoked. At the time, the group won the support of the BC Civil Liberties Association, which has a history of pro-choice advocacy. The case was settled out of court, and YPY’s club rights were reinstated.

Anastasia Pearse, who was at the university at the time and is now executive director of National Campus Life Network, says she became active in pro-life advocacy as a teen.

“I’ve been with NCLN for four years now,” she says, “and in that time we’ve seen a steady stream of censorship of the pro-life position on campus.”

Pearse calls the treatment of groups like Students for Life at Ryerson unfortunate. Student unions, she argues, are supposed to promote diversity.

While Youth Protecting Youth at York University has official club status, president Adriana Palma says their pro-life message is often attacked on campus. The group’s posters and banners have been torn down or shredded, and last year, an information table organized by YPY members was blocked by pro-choice students.

“They created their own signs and created a line so people couldn’t see our table,” Palma says. “One person started it by going to get a piece of paper and writing on it, and people started to join her. It wasn’t one specific group that came to protest against us. We’ve experienced discrimination from many groups. We just don’t know exactly who.”

At the University of Toronto, on-campus debates on abortion and panel discussions that include both pro-choice and pro-life perspectives are often attended by students, staff and members of the public. University of Toronto Students for Life has held club status through the students’ union for more than a decade.

“We’ve never had a problem with our students’ union at U of T trying to challenge our club status,” says Blaise Alleyne, a graduate student and one of Students for Life’s education coordinators. “The university administration is quite considerate of free expression in almost everything. When we’ve held debates, for example, they recognize that we’re having both sides fairly presented. As a legitimate event on university campus, they work with us to make sure everybody’s safe and that events don’t get disrupted. There’s freedom of expression, and you can see that at U of T beyond the abortion issue.”

Alleyne got involved with Students for Life as an undergraduate. Raised in Toronto, the 28-year-old says he grew up in a pro-life family and became convinced that abortion was wrong after completing a high school project on partial-birth abortions.

At U of T, about 10 club members attend weekly Students for Life meetings. The group also provides volunteer outreach at a nearby crisis pregnancy centre and performs pro-life advocacy work on campus. While Students for Life’s core group is small, Alleyne says their events attract “a few dozen people” and a couple of hundred have signed their mailing list.

“I see among my generation an influx of young people who see this as an issue of justice,” Alleyne says.

On a national level, Pearse sees a similar trend, a growing group of concerned millennials.

“The majority of people we speak to agree that we should have some kind of protection for pre-born children.”

Grant, meanwhile, says he looks forward to his group’s case against RSU.

“It’s only really the students’ union that we’ve received push-back from.”