NOW MagazineNewsCan Rob Ford save himself?

Can Rob Ford save himself?

Before last week's shitstorm, defending the mayor's bad behaviour has always hinged on denying the truth. Some are still in denial. 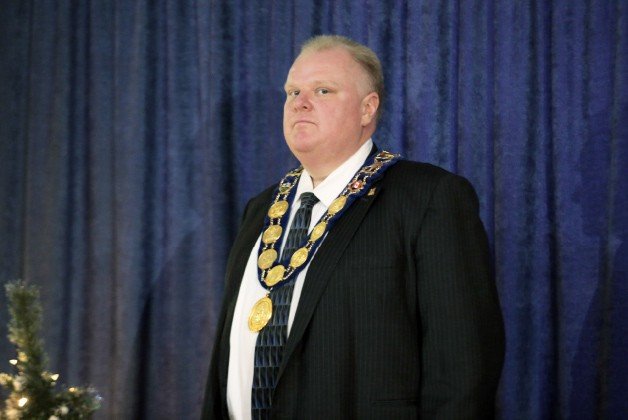 The mayor at the New Year's levee shortly after his "come-to-Jesus" moment earlier this year. Photo by Cheol Joon Baek.

At a Passover seder last month, a family friend picked a fight with some of us over Rob Ford. The context was that Ford was trying to do his best, and saving us some money, so everyone should just lay off the poor guy. After all, isn’t Kathleen Wynne just as bad because of the gas plants and the e-mails and the helicopters and you just know Tim Hudak would clean up the province and also Stephen Harper he’s getting kind of a raw deal eh?

I was not the only person who pushed back at this. That was heartening. But you get a sense of the argument – a capital-C Conservative who copies people on the supposedly snappy e-mails he sends to the National Post every few weeks, regurgitating right-wing talking points at random in an attempt to steer the conversation away from his original clueless provocation that Ford isn’t so bad.

Actually, there was one other tactic. Every time someone made a statement of fact – like say, Ford’s repeated assertion that cutting the vehicle registration fee saved the city $240 million dollars, when in fact it actually deprived the city of $240 million in revenue – this person would dodge the point by saying, “Well, I don’t know about that.”

We hear that a lot about Ford: there is no evidence to support the unending accusations thrown at him.

Did a traffic camera catch him blowing past the doors of that streetcar? Did anyone get a photo of him being asked to leave the Garrison Ball in 2013, or snorting whatever it was he was snorting at the Bier Markt the year before? Did anyone actually see him drive drunk to the Taste Of The Danforth, or did he drive there sober and get hammered behind the wheel of his parked car? (Because that would be fine, I guess.) Did you see the crack video, or are you just relying on the word of obviously biased reporters?

Once people started coming forward on the record about Rob, and once truly damning evidence started to surface – including in 500 pages of Brazen 2 court documents related to the police probe of Ford’s alleged drug dealer Alexader “Sandro” Lisi – his defenders changed their story. Give the guy a break, he’s under all this stress, he goes clubbing to blow off steam. Who hasn’t urinated in a public park? Sarah Thomson is crazy. So why hasn’t he been arrested?

I’d like to know the answer to that last one myself, especially since the Brazen 2 documents appear to detail Ford breaking the law while under police surveillance. But the defenses all boiled down to the same thing: if we didn’t see Ford do these things with our own eyes, we can’t believe they ever happened.

Defending Ford has always hinged on denying the basic truth. There’s a strong impulse, particularly in conservative circles, to blame any reporting of unpleasant truths as deliberate persecution by an elaborate conspiracy of elites who just want to bring you down. In Ford’s case, the pain caused by any bad behaviour is a distant second to the humiliation caused by its exposure.

Thanks to the revelations of the last few days – screen grabs from a new video of Ford holding “a copper-coloured pipe” in a state of bleary-eyed intoxication, an audio recording of the apparently inebriated mayor hurling sexual and racial insults at a bar near his mother’s home, and further revelations of the drunken intimidation of City Hall staff this past St. Patrick’s Day – Ford’s remaining defenders can no longer fall back on the excuse that they “don’t know about that.” We all know.

We’ve always known, really. Toronto has been witness to Ford’s never-ending self-destruction for years, even before he was elected mayor. Some of us have just been better at accepting reality.

I can’t blame the mayor’s supporters for hanging on as long as they have. Denial is easier than acceptance, and if you’re fully invested in the Ford brand, you had a lot of practice at denying things by the time last week’s shitstorm hit.

The Fords themselves, though? They’re still in denial. That’s why neither Rob nor his brother Doug – who, it turns out, is only the mayor’s second-biggest enabler after the Globe revelation that the new crack video was shot in sister Kathy’s basement – made reference to Rob’s drug problems, or even uttered the word “rehab” in their public statements.

The statement issued by the mayor’s office quotes the mayor saying: “I have a problem with alcohol, and the choices I have made while under the influence” and pledged to “seek immediate help” on Thursday morning, Doug said Rob “has faced his problems and has decided to seek professional help.”

And here we have a problem. Because other than Rob being bundled off to an undisclosed Chicago location in a private plane while his brother goes on television to beg our indulgence – Fords, they’re just like us! – this is exactly the same thing that happened last November, when Rob and Doug had to respond to Chief Bill Blair’s announcement that the Toronto police had recovered the first crack video.

Remember? Rob and Doug went on their Newstalk 1010 radio show, and Rob read that long, tortured apology for his public behaviour. And almost an hour went by before a caller forced him to specify what behaviour he was talking about. Rob’s entire apology, it turned out, was for staggering around shitfaced at the Taste Of The Danforth.

It was the only time I’ve been willing to believe the stories of Team Ford’s political savvy. In one excruciating week, they shifted Rob’s issues away from confirmed crack use to maybe having a few too many “pops” now and then. It was a brilliant move.

Having Rob apologize for a drinking problem – and even appear to mean it – put him back in that victimized light. It allowed his supporters to think about that time they themselves maybe had one too many, and feel bad for the big doofus. And it allowed the Fords to dodge questions about harder substances by saying Rob had already apologized. It was time to move on. Anything else?

Of course, with Ford there’s always something else: the speed-rapping rant at Steak Queen more public unpleasantness on St. Patrick’s Day, when he was videotaped weaving on the sidewalk outside Nathan Phillips Square and whatever the fuck happened on the night of April 5 when Twitter lit up with reporters describing a smell like burning rubber filling the hallways of City Hall after the mayor was turned away from an executive lounge at the Air Canada Centre. It certainly wouldn’t be out of character for Rob to respond to public humiliation by going on a bender.

Wednesday evening, Rob announced he was taking a leave of absence, which seems now like an obvious attempt to get out ahead of the scandal. And it seems to have worked, with newspapers, TV shows and websites around the world reporting that Rob Ford is finally going to get help for his substance abuse problems.

I would love to believe that this is true – that Rob has hit rock bottom, and is getting proper medical and psychiatric treatment for his profound issues.The only other way out is death – and I really don’t want that to happen. Ford may be a disaster, but he’s a human being in obvious pain he needs help. On a more basic level, he has two small children they shouldn’t have to bury their father. Watching this, even from what I hope is a safe distance, is bad enough.

And imagine what a clean and sober Ford could do to help other addicts as an advocate for treatment and harm reduction. It’s a long shot, I know, because nothing he’s ever said or done in public life suggests any kind of empathy for drug users, but maybe that’s just the denial talking. At the very least, he’d be an example: if he can get out and get clean, anyone can. It’d be great. I just don’t think it’s going to happen.

The last time Ford pledged to get “professional help” for his drinking, he was really talking about hiring a trainer. And before too long, Rob and Doug were walking back Rob’s promise to quit drinking nah, he never said that, those videotapes must be wrong.

Nothing in Rob or Doug’s public statements gives me any confidence that this time is any different. Rob taking a leave from the campaign isn’t a clever stunt it’s the biggest and most blatant Hail Mary move yet. Campaign manager Doug is just repeating the November strategy – apologize for the less ugly thing, wait a little while and then get back to ignoring the media.

The only people who still believe it are the dwindling remnants of Ford Nation. Who else is left? If Rob really is in rehab, Doug would be having him tweet selfies from his room. Doug has never hesitated to use his brother’s suffering for public sympathy. Instead, he’s played his usual card of asking the media to back off in this time of family crisis – a line echoed by their mother Diane Ford in an interview last week – leaving the rest of us waiting to see what happens next.

We’re all keeping one eye on Instagram, waiting for some Chicago clubber to post a video of Rob ordering shots. That’s where Rob Ford has left us. Waiting for the next worst thing.