NOW MagazineNewsCan Rob Ford save himself?

Can Rob Ford save himself?

The last time the mayor pledged to seek “professional help,” it turned out he was talking about a personal trainer 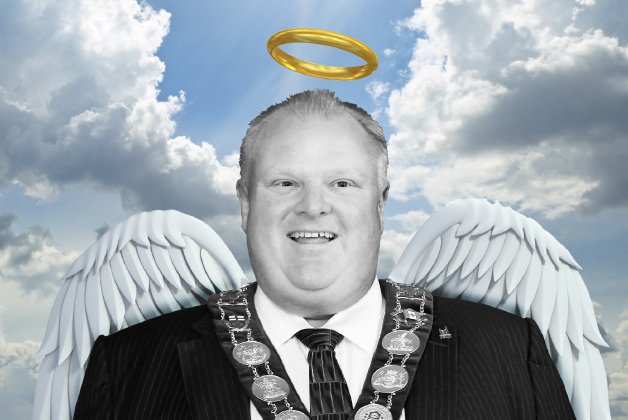 Defending Rob Ford has always hinged on denying the basic truth. Thanks to the revelations of April 30 – screen grabs of Ford holding “a copper-coloured pipe” in a state of bleary-eyed intoxication, and audio of the apparently inebriated mayor making sexual and racial insults at a bar near his mother’s home – Ford’s remaining defenders can no longer fall back on the excuse that they “don’t know about that.” We all know. We’ve always known, really.

Toronto was witness to Ford’s never-ending self-destruction even before he was elected mayor.

I can’t blame the mayor’s supporters for hanging on as long as they have. Denial is easier than acceptance, and if you were fully invested in the Ford brand, you’d had a lot of practice denying things by the time last week’s shitstorm hit.

The Fords themselves? They’re still in denial, too.

Neither Rob nor his brother Doug made reference to Rob’s drug problems, or even uttered the word “rehab” in their public statements. Rob pledged to “seek immediate help” on Thursday morning, May 1, Doug said Rob “has faced his problems and has decided to seek professional help.”

And here we have a problem. Because except for Rob’s flying to Chicago in a private jet, only to be turned around, while his brother went on television to beg our indulgence (Fords, they’re just like us!), this was exactly what happened last November after Rob’s “come-to-Jesus” moment. Back then Rob and Doug had to respond to Chief Bill Blair’s announcement that the Toronto police had recovered the first crack video. Remember?

On their Newstalk 1010 radio show, Rob read that long, tortured apology. His entire mea culpa, it turned out, was for staggering around shitfaced at Taste Of The Danforth.

It was the only time I’ve seen evidence of Team Ford’s supposed political savvy. In one excruciating week, they shifted the focus away from Rob’s confirmed crack use to his maybe having a few too many “pops” now and then. It was brilliant.

It allowed the Fords to dodge questions about harder substances by saying Rob had already apologized. It was time to move on. Anything else?

Of course, with Ford there’s always something else: the speed-rapping rant at Steak Queen more public unpleasantness on St. Patrick’s Day, when he was videotaped weaving on the sidewalk outside Nathan Phillips Square and whatever the fuck happened the night of April 5, when Twitter lit up with reporters describing a smell like burning rubber filling the hallways of City Hall after the mayor had been turned away from an executive lounge at the Air Canada Centre.

Newspapers, TV shows and websites around the world are dutifully reporting that Rob Ford is finally getting help for his substance abuse problems.

I would love to believe this is true – that he’s getting proper medical and psychiatric treatment for his profound issues. Imagine what a clean and sober Ford could do to help other addicts as an advocate for treatment and harm reduction.

But at the very least, he’d be an example: if he can get out and get clean, anyone can. It’d be great.

Except the last time Ford pledged to seek “professional help,” it turned out he was talking about a personal trainer. And before too long, Rob and Doug were walking back on Rob’s promise to quit drinking: nah, he never said that those videotapes must be wrong.

Nothing in Rob or Doug’s public statements gives me confidence that this time is any different. Rob’s taking a leave from the campaign isn’t a clever stunt it’s the biggest and most blatant Hail Mary move yet. Campaign manager Doug is just repeating the November strategy: apologize for the less ugly thing and then get back to ignoring the media.

Doug has played his usual card of asking the media to back off in this time of family crisis, echoed by their mother, Diane Ford, in an interview last week.

This leaves the rest of us keeping one eye on Instagram, waiting for some clubber to post a video of Rob ordering shots. That’s where Rob Ford’s left us – waiting for the next worst thing.