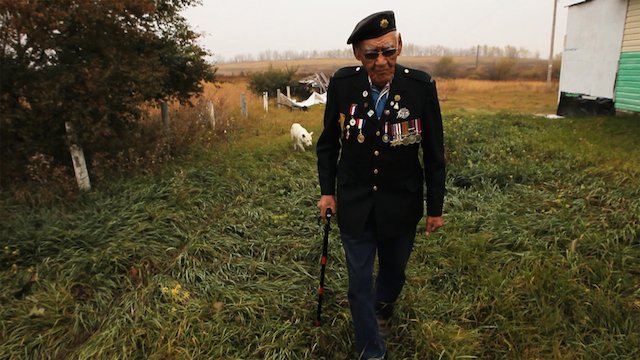 Elder Philip Favel, a Second World War veteran, from Strike Him On The Back First Nation - Saskatchewan Treaty 6. 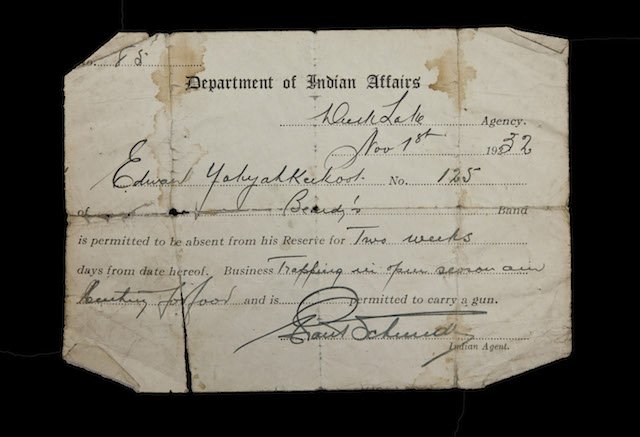 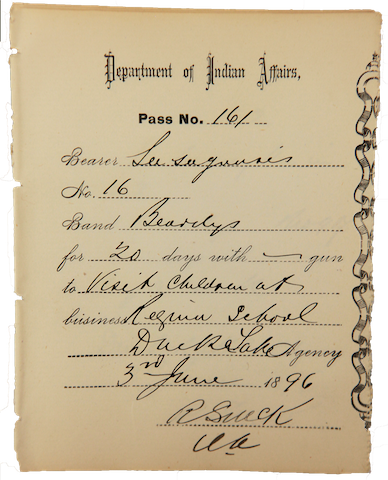 Segregation is not a word most people would associate with Canada. Yet for close to 60 years beginning in 1885, the Canadian government put in place a system that required First Nations in Western Canada to request a pass just to leave their reserve.

This “pass system” was put in place after the Northwest Rebellion as part of a series of recommendations for the “…Future Management of Indians” put forth by Assistant Commissioner for Indian Affairs Hayter Reed, despite clearly knowing it was contrary to treaties the government had signed about a decade earlier.

Prime Minister John A. Macdonald enthusiastically approved the system saying it was “…in the highest degree desirable to adopt it.”

The permits were to be issued by the local Indian Agent in charge of implementing government policy on reserves. The passes themselves were required by Indian Affairs for all manner of reasons, including visits from parents to their children at residential schools, hunting and fishing, and even to get married.

For those who experienced it, the system rendered reserves virtual open-air prisons. Because of destroyed documents and because the passes were issued at the pleasure of the Indian Agent, it’s unclear how many people were subject to it.

There are reports from elders of being apprehended if they were caught off reserve without a pass, or if they returned late. On what charge they were detained remains unclear, as there was no law they were breaking.

In fact, the North West Mounted Police raised questions about the system in 1893, as there was nothing to charge people with. Force Commissioner Lawrence Herchmer (a former Indian Agent) issued an order to stop enforcing the system.

Indian Affairs, however, prevailed and the system was reinstated.

Reed, who was by then promoted to Indian Affairs Commissioner,  hoped to keep internal questions about the system secret in order to better enforce it, saying “…all we can endeavour to do is to keep the true position from the Indians as long as possible.”

Several times the government examined the system to determine if it was legal, going as far as to ask the opinion of higher courts, which in 1900 stated that it was “…an unwarranted interference with the inherent rights of the individual.” The pass system was nonetheless enforced for another four decades.

In 1941, Harold McGill, the Head of Indian Affairs, ordered Indian Agents to cease enforcement of the system, and ordered all forms be sent to Ottawa “…where they will be destroyed.”

After recent and intensive searches, little evidence this part of Canada’s history remain. Disturbingly, only two passes have been found at Library and Archives Canada. Other passes and evidence of the system’s impacts have been uncovered in regional archives across Canada, but most of our knowledge of the system comes from the testimonies of elders whose families lived through it.

Leona Blondeau, from George Gordon First Nation, Treaty Four (Southern Saskatchewan), whose family was directly impacted by the system, says that “We were on the reserve, and that was all we had… We were completely segregated.”

The pass system helps to reveal something about the nature of a very Canadian form of racism. Although knowledge of the system is still very much incomplete, its effects on Indigenous peoples’ prosperity and well-being are vast and incalculable. For the settler population, the policy assisted in privileging their economic advancement over First Nations by securing the West for their agricultural and resource exploitation, a legacy all too relevant to today.

The Pass System by Alex Williams has its Toronto premiere at the TIFF Bell Lightbox Friday, February 19 at 8:45 pm.  A second screening on Sunday, February 21 at 3 pm is followed by a panel discussion with author and activist Pamela Palmater, historian John S. Milloy, and activist lawyer Beverly Jacobs.