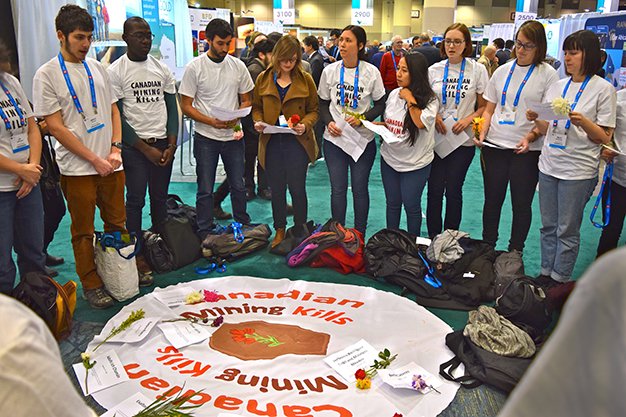 Four days after the assassination of Honduran indigenous leader Berta Cáceres captured worldwide headlines, a vigil to remind of the blood on Canada’s hands for all those who have died protesting Canadian mining projects abroad interrupted the mining industry’s annual confab in Toronto on Sunday, March 6.

The vigil held by the Mining Injustice Solidarity Network at the convention of the Prospectors & Developers Association of Canada (PDAC) was presided over by Anglican priest Maggie Helwig. “We are here to name the dead,” she said.

The vast majority of killings have not been solved or, in many cases, even investigated.

The names of some two dozen victims of such violence were read out at the PDAC vigil. The protesters were then escorted out by police.

Canadian mining companies are among the worst human rights offenders on the planet. The most recent evidence of that is a 2014 report submitted to the Inter-American Commission on Human Rights. A 2009 report commissioned by PDAC but never made public also detailed targeted assassinations and persecution of activists and union leaders opposing Canadian projects abroad.

It’s impossible to know exactly who killed each of these people. The vast majority of the cases have not been solved or in many cases even investigated. But they all have something in common: all were assassinated and all resisted Canadian mining projects.

• Merilyn Topacio Reynoso Pacheco The 16-year-old was killed and her father seriously injured in an April 2014 attack. The activists, part of the Peaceful Resistance in Defense of Natural Resources of Mataques-cuintla, Jalapa, had led the fight for a referendum on development of Tahoe Resources’ Escobal mine in southeastern Guatemala.

• Adolfo Ich Chamán The respected community leader was hacked by machetes and then shot in the head on September 27, 2009, allegedly by security personnel working for Hudbay’s Fenix mining project in El Estor, Guatemala. A multi-million-dollar lawsuit filed in Canadian court by Chamán’s wife alleges negligence on the part of the company. The ex head of security for the mine is on trial in Guatemala for Chamán’s murder and the wounding of at least 10 others.

• Telésforo Odilio Pivaral González The member of the Committee in Defense of Life and Peace in San Rafael Las Flores was killed near Tahoe Resources’ Escobal mine in Guatemala on April 5, 2015. According to a statement released by members of the “We Are Human Rights Defenders” campaign, González, who had taken part in protests against expansion of the silver mine, was attacked “by unknown persons with firearms.”

• Mariano Abarca Roblero The anti-mining activist was killed outside his home in Chiapas, Mexico, on November 27, 2009. He had blamed Calgary-based mining company Blackfire Exploration for contaminating local rivers, loss of crops and the deaths of livestock. Blackfire’s open-pit barite mine in Chiapas was closed in 2011 over environmental concerns.

• Dora “Alicia” Recinos Sorto A member of the -Cabañas Environment Committee, which had been campaigning against the reopening of Vancouver-based Pacific Rim’s El Dorado gold mine in El Salvador, Sorto was shot and killed on December 26, 2009, as she returned home from doing her laundry. She was eight months pregnant.

• Ramiro Rivera The vice-president of the Cabañas Environment Committee was gunned down on December 20, 2009. His anti-mining activities against Pacific Rim in El Salvador were believed to be behind the killing. In an earlier attempt on his life, a would-be assassin shot Rivera eight times in the back and legs, but he survived.

• César García Moreno A member of the farmers’ rights group Conciencia Campesina, García was active in the movement opposing multinational gold-mining company AngloGold Ashanti in Cajamarca, Colombia, when he was killed on November 2, 2013.

• Rigoberto López Hernández The Honduran activist was found with his throat slit and his tongue cut out on May 3, 2014, an assassination that activists say was clearly meant to send a message over his opposition to the iron oxide mine in Quita Ganas.

• José Isidro Tendetza Antún The indigenous leader, vice-president of the Shuar Federation of Zamora, was found bound and buried December 2, 2014 (with signs of torture and strangulation on his body). He was last seen on his way to a meeting of protesters opposed to B.C.-based Corriente Resources’ Mirador copper and gold mine in Ecuador.

• Rafael Markus Bangit An elder of the Malbong tribe in Kalinga province in the Philippines and regional council member of the Cordillera Peoples Alliance, Bangit was at the forefront of opposition to mining activities on indigenous land, including against Calgary-based TVI Pacific. He was gunned down by a hooded assailant on June 8, 2006.

• Kibwabwa Ghati The 23-year-old Tanzanian farmer was shot and killed by police near Barrick Gold’s North Mara mine on November 6, 2012. Police accused him of trying to steal from the mine, but some media -reports suggest he may have been caught in the crossfire as other men tried to get into the facility.

• Emerico Samarca The director of the Alternative Learning Center for Agriculture and Livelihood -Development, which opposed large-scale mining in the Philippines, including by Canadian company TVI Pacific, was killed in Lianga on September 1, 2015, by alleged members of a paramilitary group.

• Juan Francisco Durán Ayala The student anti–mining activist disappeared after posting flyers as part of a campaign against Canadian mining company Pacific Rim in Cabañas, in northern El Salvador, on June 17, 2011. The Committee in Solidarity with the People of El Salvador suspects local mayors with ties to organized crime had a hand in his killing.

• José Reinel Restrepo The parish priest of the municipality of Marmato, Colombia, was killed on September 2, 2011, days after travelling to Bogotá to register his opposition to the open-pit gold mine proposed by -Toronto-based Gran Colombia Gold.

• Alvaro Benigno Sanchez The 23-year-old was killed by two men reportedly employed as security guards by a U.S.-Canada-owned Glamis Gold subsidiary in Guatemala on March 13, 2005.

• Damodar Jhodia, Abhilash Jhodia and Raghunath Jhodia Murdered on December 16, 2000, in the Kashipur region of Orissa, India, reportedly over their opposition to a mining project partially owned by Rio Tinto Alcan.

• Exaltación Marcos Ucelo The community activist, secretary of the Xinca Indigenous Parliament, was kidnapped, tortured and found dead on March 18, 2013, because of his opposition to Tahoe Resources’ Escobal mine in Guatemala.

• Unnamed mine worker He died of heat exhaustion and dehydration at Nevsun’s Bisha Mine in Eritrea (date unknown). His death is the subject of a Canadian lawsuit against BC’s Nevsun Resources.

Rachel Small is a member of the Mining Injustice Solidarity Network.