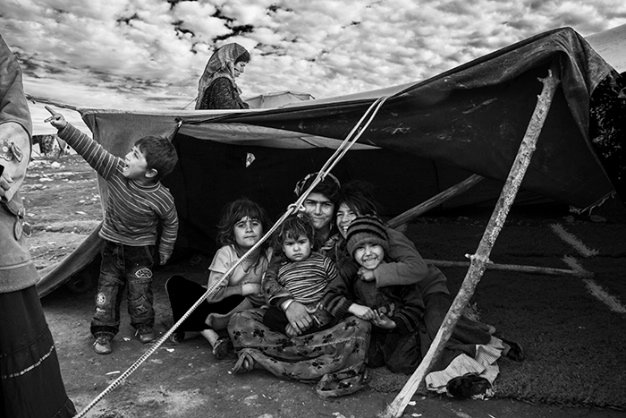 Like many Canadians, I was well aware of the Syrian refugee crisis, but my eyes took a while to open as the human disaster caused by five-years of civil war intensified this summer.

It wasn’t until several weeks ago, as my family and I met with our rabbi to reflect on my grandmother’s life on the eve of her funeral, that I felt personally called to action after I learned that my own grandparents — themselves immigrants fleeing harship decades earlier — had sponsored a Vietnamese refugee in the late 1970s. Canadians welcomed more than 50,000 back then.

Along with a handful of friends and acquaintances in our neighbourhood, I helped launch a grassroots group to sponsor refugees in early September. Our group now numbers more than 120 members. With the help of a Facebook page, a donated website, a Google docs sign-up sheet and lots of word of mouth, we have raised more than $72,000.

Faith communities are especially well-placed to welcome refugees. While we are non-denominational, our group is working with two agencies with government-mandated Sponsorship Agreement links: United Church of Canada, and Jewish Family Services to help facilitate the process of bringing refugees here.

Rather than be deterred by the tension between Israel and Syria, the Jewish community sees Syrian refugee sponsorship as an opportunity. The broader mandate of Jewish Family Services, for example, includes “working to increase quality relationships between Jews and Muslims,” executive director Mark Zarecki tells me.

Over at Lifeline Syria, a mostly volunteer organization that was formed in June as public awareness of the plight of Syrian refugees was reaching its peak, the response has been “phenomenal,” says Peter Goodspeed, the group’s communications director. He estimates that there are 300 sponsoring groups in Toronto alone. A detailed handbook for sponsors is available through Lifeline Syria’s website, and the organization is now in the process of compiling a short guide to Syrian culture.

With Justin Trudeau’s promise to bring 25,000 Syrian refugees to Canada by the end of the 2015, hundreds of groups across the country are coming together to assist in private sponsorship and resettlement.

Canada is one of the only countries that offers a private sponsorship option to supplement government-run efforts, “allowing many more refugees to be sponsored than would otherwise be the case,” in the words of one Citizenship and Immigration official.

But sponsoring refugees is no small feat: at least $30,000 has to be raised, the estimated cost of supporting a family of four for a year – less if the adults find work sooner. Sponsoring groups or indivdiuals must also provide a detailed statement of how they plan to help the refugee family resettle. This can involve everything from bringing winter clothes to the airport, to helping parents register their kids for school and arrange vaccinations, to helping navigate public transit, sign up for English classes, and run a household budget. Sponsors are also encouraged to host the family in someone’s home before helping them find an apartment of their own.

Paul Durber, a retired public servant in Ottawa, helped sponsor a refugee from Darfur seven years ago. Paul and four others put up $20,000 to bring over the young man, Adam.

“I just had to hear [the word Darfur]…to empathize with their loss of everything,” Paul tells me.

Did anything surprise him during the sponsorship experience? “We didn’t quite understand the detailed personal nature of the relationship we were getting into,” Paul says. But “it’s been a source of great joy.”

Now, Adam has a night job cleaning at a university while also going to school full-time, which doesn’t leave him much time for sleep. Five years later, “there’s still a relationship there,” says Durber. “He and another refugee I see reasonably often both came to the memorial service for my partner. I was very touched.”

Diana Lary, a retired history professor now living in Vancouver, sponsored a Vietnamese refugee in the late 1970s, and a Chinese refugee 10 years later. The young man from Vietnam was in his early 20s when he arrived in Toronto to live with Diana and her family. Without knowing much English, he enrolled in the local high school. He went on to attend University of Toronto, and now has a “very successful career,” according to Lary.

With the young man from China, Lary recalls one near-miss – he came home one day saying he’d been driving on the Don Valley Parkway without realizing that he needed a license. Aside from that, she says the young man adjusted quite well to life here.

But he was also “quite traumatized” by the Tiananmen Square massacre. “We’d now call it PTSD,” says Lary, who spent “an enormous amount of time” talking to him about it.

Studies point to elevated levels of anxiety and depression among refugees. This, in addition to coping with specific harrowing experiences they may have endured getting here in the first place. Many refugee families may be leaving children behind in the care of other family members. Trauma is something that host groups should be prepared for.

But as Canada shut down the Syrian embassy back in 2012, quick cultural advice is no longer a phone call away.

Nabil Khalil, owner-operator of a computer repair business in the Glebe neighbourhood of Ottawa, was born and raised in Syria, his family immigrating to Canada when he was 19. As a newcomer, he recalls the kindness of a chemistry teacher who made an effort to introduce him personally to other students.

And while Nabil emphasized to me how culturally and religiously diverse Syria is — and on top of this, political affiliations will likely be extra polarized given the civil war – he suggested some basic Arabic phrases for welcoming refugees.

Depending on their level of religiosity, you may want to check before offering your hand to the opposite gender. And certainly, Nabil adds, one shouldn’t embrace kids without the parents’ permission.

On a lighter note, Syrians are crazy for Egyptian cinema. So with a little help from Youtube, you can organize a popcorn night for newcomers looking to regain some normalcy and build a new life in Canada.

Mira Sucharov is associate professor of political science at Carleton University and regular contributor to the Globe and Mail, Haaretz and Canadian Jewish News. She is a founding member of Ottawa Centre Refugee Action.