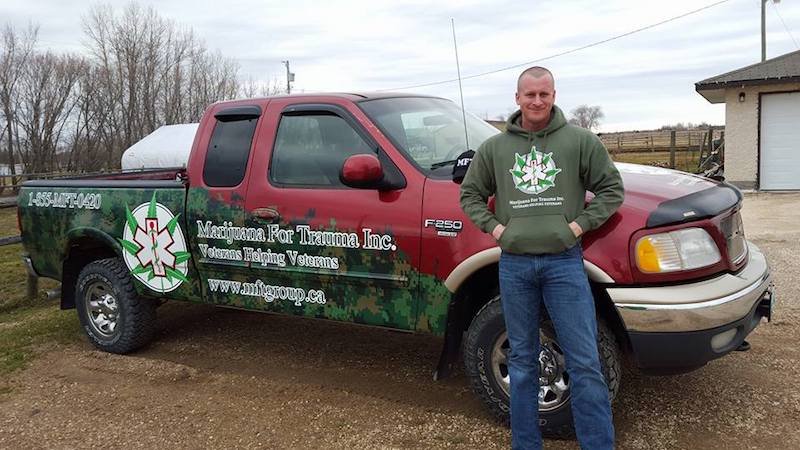 Darrell Hulme could be mistaken for a medical professional.

He can list the names of near-unpronounceable antidepressants and easily articulate the differences between the various forms of therapy they’re used for. His knowledge doesn’t come from formal schooling, but years of first-hand experience with the drugs.

After spending close to two decades in the Canadian Armed Forces, Hulme began to experience the effects of post-traumatic stress disorder (PTSD). He was released from the military for medical reasons in 2015.

He says he was taking between 12-15 pills a day – “opioids, Benzos, SSRIs (selective serotonin re-uptake inhibitors), tranquilizers” – for almost a decade to deal with the effects of depression, anxiety and insomnia caused by his PTSD. The side effects from the drugs became so severe that he attempted suicide three times and was a patient in various psychiatric wards.

“The pharmaceuticals turned him into a monster,” says his partner, Ashley, over the phone from their home in Manitoba.

Everything changed, Hulme says, after he applied for a prescription for medical marijuana and started using various strains of cannabis to treat his condition. He felt relief for the first time in years.

Before discovering marijuana, Hulme says. “I never left my house.” Now, “I function very well as long as I have my medicine.”

He spends much of his time these days educating other veterans as well as first responders about the benefits of marijuana in helping to treat not only PTSD, but chronic pain and other ailments – “To help them get away,” he says, “from more dangerous pharmaceuticals.”

“Cannabis can kick addiction. I’ve seen it in hundreds of cases including my own pharmaceutical addiction and alcohol abuse,” says Hulme.

But now, because of a recent federal government decision, he’s afraid his nightmare will return.

In November, Veterans Affairs Minister Kent Hehr announced new restrictions on the medical marijuana reimbursement policy. Effective May 2017 veterans, who are currently reimbursed for up to 10 grams of cannabis per day, will only be eligible for a maximum three grams a day.

Veterans Affairs Canada (VAC) cites information from the College of Family Physicians of Canada, which instructs medical professionals “to start low and go slow” when it comes to prescribing marijuana, as part of its rationale for the change. VAC says that three grams should be plenty for most individuals – the average dispensed by Health Canada’s medical marijuana program for all patients is 2.6 grams.

The government also cites possible abuse by licensed producers as a reason for the changes. Under the new rules, they will only be allowed to charge a maximum $8.50 a gram. As previously reported, some producers and storefront dispensaries have been directing veterans to specific products that were priced much higher, upwards of $15 a gram.

According to the department, 3,071 veterans have claimed $31 million in medical pot from April to September this year, a significant increase from the five veterans who claimed $19,088 when the program first started in 2008.

Overall use of the prescription drug program also available to vets has trended downward in the last few years, confirms VAC press secretary Sarah McMaster, leading some to question if a decrease in pharmaceutical spending requires a policy change where medical marijuana is concerned. However, McMaster contends there is no link between the two and that the trend in pharmaceutical use “can be attributed in part” to the fewer veterans using the prescription drug program.

The new reimbursement program will include exemptions for vets in “exceptional circumstances.” That process, according to a VAC backgrounder, “will require additional documentation from medical specialists [a psychiatrist, pain specialist, oncologist] related to a veteran’s specific needs.

“The opinion of the medical specialist must include the rationale for the use of more than three grams, confirmation that there are no contraindications, and an indication that alternative treatments were ineffective or contraindicated.”

Hulme, who uses 10 grams a day, is worried the new policy will leave many veterans with PTSD where they started “back in the basement again, stuck in the bottom of a bottle, trying to get to sleep at night.”

A group of veterans is planning a nationwide march to Parliament Hill to protest the decision, organized by Marijuana for Trauma Inc. The group plans on landing on the steps of Parliament Hill just days before the new policy comes into effect.

Some in the industry support the coming changes.

“In our clinic, the average prescription is about a gram per day, maybe less than a gram a day,” says Ronan Levy, director at Canadian Cannabis Clinics, the largest clinic specializing in connecting weed-friendly doctors to patients in the country.

But others, like Dr. Greg Passey, a psychiatrist who often treats individuals for PTSD – an area he knows very well, being a former soldier – believe the policy changes are shortsighted, if not hypocritical.

Passey says many pharmaceutical drugs typically used to treat PTSD are not specifically approved for the condition, meaning that doctors are left to prescribe what they believe will best suit their patients. He argues the same should be true for cannabis.

“Veteran’s Affairs says there’s not a lot of evidence about marijuana and its efficacy, but they have no problem paying for a very expensive medication for which there is absolutely no evidence that it’s beneficial in PTSD.

He says that doctors often prescribe over the recommended doses for some pain medications and anti-psychotics because they prove to be effective for some patients. Passey argues that for the government to intervene in deciding what should be a legal limit for prescribing marijuana is completely outside its jurisdiction.

“It’s interfering in the doctor-patient relationship and the treatment regime and that’s not appropriate,” he says.

Passey says most vets who require more than three grams a day won’t be approved for the exemptions because there are very few medical professionals who specialize in PTSD treatment and even fewer who are also knowledgeable in the prescription of medical marijuana.

He argues the new regime will preclude some vets from receiving treatment that has been effective for them – and may fly in the face of a June 2015 Supreme Court of Canada decision, which found restricting access to marijuana unconstitutional.

Says Hulme, “We’ve fought long enough and we’re tired of fighting. We know we’re going to die without this stuff.”