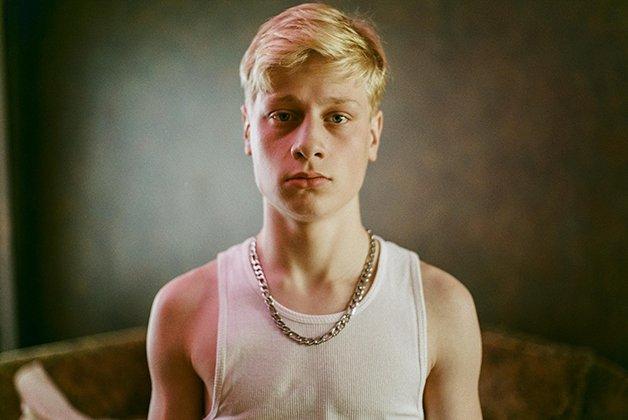 Cannes, France – “Let’s hold onto our dreams because with them we can change the world,” Xavier Dolan said, accepting his Jury Prize award last Saturday night, May 24.

“And the world needs to be changed.” The Quebec-born writer/director tearfully connected directly with jury president Jane Campion recalling that his stepmother recommended he watch The Piano when he was 15. It was an experience which inspired him to write roles for strong-willed women. Campion stood up, walked over to Dolan and hugged him.

“I loved Mommy so much, such a young director [Dolan is 25], kind of a genius,” Campion said at the jury press conference following the awards ceremony.

Canada made history at Cannes this year with two prize-winning films. Dolan’s exuberant Mommy shared the Jury Prize with Jean-Luc Godard’s playful Goodbye To Language, while Julianne Moore was named Best Actress for her pivotal, emotionally complex role in Maps To The Stars, David Cronenberg’s caustic comedy about Hollywood.

Dolan’s film jumped off the screen with a life force that was contagious. A mother, her 15-year-old ADHD-afflicted son and their neighbour, a teacher who is more at ease with them than she is with her own family, spend several intense weeks together. The movie is formatted one to one – that is, it appears on the screen in the shape of a square. At one ecstatic moment as the son is moving down the street on his longboard with the two women on the sidewalk behind, he extends his arms sideways and pulls the image to widescreen width. Spontaneous applause broke out when I saw it, a decidedly rare occurrence at Cannes press screenings.

Mommy and Goodbye To Language were the most palpably energizing of any in the competition. Godard uses 3D in an eye-popping way. It feels modern. It’s his most accessible and fun film in years, given that there’s no narrative. Placing his camera so that objects in the foreground change and enhance our perspective, he gets to the heart of an illicit love affair, while using literary, political and cinematic references to amuse and stimulate.

“I wasn’t expecting the Godard,” Campion said of the film that finally gave the 83-year-old filmmaker a Cannes prize in his seventh try. “I found myself awakened.”

As for Winter Sleep, the Palme d’Or-winning film by Nuri Bilge Ceylan, Campion admitted to being scared by its three-and-a-quarter-hour length but “the film had such a beautiful rhythm it was really masterful and sophisticated.”

That’s the appeal of this exploration of the human condition inspired by several short stories by Chekhov, one in particular that Ceylan carried in his head for 15 years. As a character study of a retired actor turned hotelier, it’s a wonderful depiction of the full spectrum of human feelings and relationships, a worthy Palme winner, a film to be explored and enjoyed for years to come.

The release date for Mike Leigh’s Mr. Turner, which won Timothy Spall Best Actor, has already been set for the weekend before Christmas. Such is the commercial side of the movie business, with Oscar hovering in the background. Bennett Miller, named Best Director for Foxcatcher, is used to having the gold man follow him (after Capote and Moneyball) and will likely be joined by his stars Steve Carell and Mark Ruffalo when next year’s nominees are announced. “I don’t know if it can be communicated how courageous it was for Steve Carell to take on this role,” Miller said.

Spall gave credit to Leigh for a role that “we built together” over a period of three years, two of which he spent learning to paint to prepare for his part as J.M.W. Turner.

The Grand Prix deservedly went to The Wonders, Alice Rohrwacher’s poetic depiction of a family working a honey farm in Tuscany. It’s told from the point of view of an independent-minded teenager, the eldest of four daughters, who becomes our conduit into this very real world and is the life running through it.

Best Scenario went to Andrey Zvyagintsev’s Leviathan, an unrelenting depiction of corruption in a small Russian town near the Barents Sea. Zvyagintsev and his writing partner Oleg Negin use the story of Job as a takeoff point for a serious questioning of the authority of the state, coincidentally an echo of the Jacques Ellul quote “The state is absolute” in Godard’s Goodbye To Language. The film’s title is a direct reference to Hobbes’s book in which the philosopher proposed striking a bargain with the state to achieve security against chaos. Zvyagintsev clearly sees it as a pact with the devil.

This year’s official poster (a still of Marcello Mastroianni from 8 ½) dominated the red carpet and his presence was reinforced by his co-star in twelve films, Sophia Loren, who gave a masterclass. It took the form of an interview with French journalist Danielle Heymann and film clips from Loren’s stellar career. The real attraction was being able to witness a legend in person, still vital at 79.

“Marcello is in my heart,” Loren said, crying as she spoke and apologizing for doing so. “I was really deeply moved to see his picture above the red carpet. So many beautiful things we did together.”

Dressed in a white pantsuit with a white brocade jacket, she epitomized sophisticated glamour, diamonds sparkling on two fingers of her left hand. Surprisingly shy and modest, it became clear that she had a single-minded dedication to her acting career.

Until she met Vittorio De Sica in 1954 and he captured her sensuality in The Gold Of Naples, she was considered un-photogenic with a mouth too wide and a nose too long. She considers De Sica’s Two Women, for which she won an Oscar, and Ettore Scola’s A Special Day (with Mastroianni) her most beautiful films. Among her Hollywood revelations was one about Marlon Brando’s penchant for ice cream which caused him to gain weight on the set of Chaplin’s The Countess From Hong Kong.

The flip side of the Cannes experience is being able to sit and watch Lost River, a not uninteresting film written and directed by Ryan Gosling and appearing in the Un Certain Regard sidebar, with cast (including Christina Hendricks) and crew a few rows away in the theatre, as well as director Wim Wenders and jury members Nicolas Winding Refn and Willem Dafoe. A few modest words from the stage by the director gave little clue as to what would occur after the screening: a tumultuous love-in, a 15-minute standing ovation followed by an exit by a rear door protected by a human chain of theatre personnel.

It reminded me of a day many years ago when I happened to be in the Hotel Carlton, at that time the epicentre of the festival, when Mastroianni himself walked in the front door. He was greeted by the immediate applause of everyone in the packed lobby. He bowed graciously, spoke a few words to some and headed upstairs. Charismatic, elegant, Mastroianni, the ultimate star, was able to calmly move through the crowd.

Best Performance By An Actress: Julianne Moore in Maps To The Stars directed by David Cronenberg