While police report the actual number of carding incidents has dropped dramatically, reforms to the controversial practice haven't taken hold 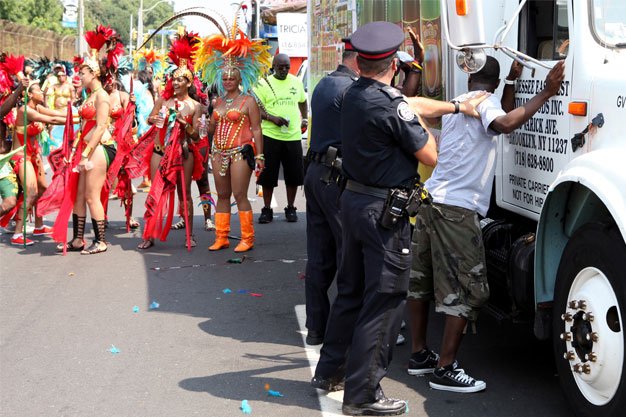 Eight months after the Toronto Police Services Board passed major reforms to prevent racial profiling by the police, the new rules around the practice known as carding have yet to be fully implemented.

Maddeningly for those who thought the new rules would lead to better relations between the cops and minority communities, the board now finds itself trying to ensure a policy it has already passed actually comes into effect. But judging from the latest TPSB meeting, the force’s leadership feels little urgency about the need to do so.

The board met on Monday, December 15, to discuss the Community Assessment of Police Practices study on carding, the controversial tactic by which officers stop people in public and request detailed personal information.

For years, critics have charged that the practice amounts to racial profiling. According to a Toronto Star investigation, between 2008 and 2012, the force issued 1.8 million contact cards to 1 million people, a disproportionate number of them young black men. Although the vast majority of contacts did not involve criminality, people who were carded had their personal details entered into a police database, info that could be used against them for years to come.

In response to those concerns, in April the TPSB approved landmark reforms prohibiting carding except in situations where there is a genuine public safety concern. The policy also requires officers to inform citizens of their right to walk away, and to issue them a receipt for the interaction.

But while police report the actual number of carding incidents has dropped dramatically, the reforms haven’t taken hold, according to the CAPP report.

The report was based on a survey of more than 400 residents of 31 Division in North York, which includes the Jane and Finch area. It found that of the 62 people surveyed who had been carded since the new policy came into effect, 65.6 per cent didn’t feel the police had a valid reason for stopping them, and 69.5 per cent said they didn’t feel like they had the right to leave when being questioned. Some 85.5 per cent reported not receiving a record of their interaction from police.

Overall, “very few” residents were even aware of the new carding policy, the report determined, and there remains “widespread dissatisfaction with the way that police interact with members of the community.”

Around 20 people showed up to speak at the Monday meeting, and while many urged the police to fall in line with the new policy, a good number wanted carding scrapped altogether.

Among those arguing for its elimination was Cutty Duncan, a veteran community activist and member of the Campaign to Stop Police Carding.

He said he understands that police need the tools to effectively fight crime in areas like 31 Division, but “if we want to move forward together, we need to be able to work together to make something that does not erode community trust and doesn’t violate people’s human rights.”

Despite such appeals for cooperation, the police brass in the room seemed to be reading from their own playbook.

Chief Bill Blair declined to comment on the CAPP report, saying he had nothing to add. When it was first published last month, the chief charged that its methodology was flawed and dismissed it as “an advocacy report.”

Superintendent Tony Riviere, the 31 Division commander, also refused to talk about the report except to say that he was “disappointed” in it.

He defended his division’s tactics, saying that officers have undergone extensive training in community engagement. He reported that public complaints against police in his district are down 85 per cent over this time last year, and while stressing that he didn’t want to “minimize people’s lived experience,” he asserted that “we’re heading in the right direction.”

In a move that seemed to typify how the two sides on the issue are talking past one another, he then played a 10-minute promotional video about 31 Division’s community outreach programs. Members of the public in attendance did not have a chance to respond.

According to board chair Alok Mukherjee, the delay in implementing the reforms has come because the board and the police can’t agree on three elements of the new policy: the definition of what constitutes a “public safety” concern that would justify carding the content of the “proactive rights” message instructing carding subjects they don’t have to cooperate and the need to issue receipts for police interactions.

The board directed Blair to work with a board subcommittee to come to agreement on those issues and report back with a “completed policy” in February.

Mukherjee, who has championed the reforms, described the delay as a “speed bump,” but said he was confident the chief and the board will “complete this important work in a timely fashion.”

Newly elected Mayor John Tory, who was attending his first meeting as a member of the board, said he wouldn’t tolerate further inaction.

Although he acknowledged Blair’s concerns about the methodology used in the CAPP survey, he said it was clear that “we haven’t achieved much satisfaction on this issue in virtually any corner of the city, including the mayor’s office.”

Tory declared that “the continuation of the status quo is corrosive in a way that is fundamentally inconsistent with how we do things in Toronto and Canada.”

But despite that strong language, Tory didn’t specifically say how he thinks the policy should be implemented, and appeared unwilling to entertain the idea that carding be abolished.

Councillor Shelley Carroll, who was also sworn in as a new board member on Monday, told the board that reform wouldn’t be enough for the many people who want carding stopped altogether.

“If we’re going to follow this tack [of reform], we’d better achieve a result,” she said. “Because it isn’t even the result that a significant amount of the community is looking for.”