Why do discussions about carding ignore the experiences of women and trans people?

By defaulting to the experiences of young Black men, the exposure of women and trans people to police harassment remains largely missing from public discussions of racial profiling 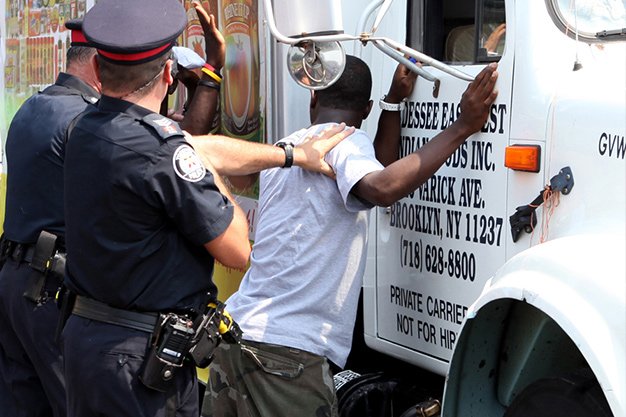 Indigenous women are the fastest-growing prison population in Canada. And a quarter of trans people in Canada, most of them people of colour, report having been harassed by police.

Yet discussions about racial profiling, including the long-assailed police practice of street checks, also known as carding, rarely mention the experiences of women or trans people.

Last week, the Toronto Police Services Board shuffled the deck yet again on carding, voting to adopt new rules for interactions with the public that critics say will do little to stop racial profiling. The board also voted not to destroy data gathered from the stopping of individuals in the past.

But by focusing only on the ways Black men experience racism from law enforcement across Ontario, and sidelining the experiences of women and non-binary people, racial profiling has been presented as one-dimensional. How can we achieve equality if we downplay the true reach of systemic racism?

The problem begins with what we mean by “racial profiling.” In the current debate, it is synonymous with carding. That over-simplification allows people to forget and ignore the fact that carding is just one way that racial profiling is carried out.

A quick glance at a map reveals how racialized Toronto’s geography is. Toronto Community Housing buildings are typically where low-income and racialized families are housed. These neighbourhoods often suffer from under-resourced schools and lack of community spaces. Isolating and labelling these communities as “high risk” or “priority neighbourhoods” has helped make them the targets of disproportionate police surveillance, particularly through police operations like TAVIS, but also the Trespass To Property Act, which is often used to justify police stops of individuals.

As our housing market shows, poverty is a way to profile individuals gender can be, too.

In the lead-up to the 2015 federal election, for example, the Conservative Party proposed and the Liberal Party supported the Zero Tolerance For Barbaric Cultural Practices Act, legislation that claimed to protect Muslim women from forced marriage and “honour killings,” but was really designed to capitalize on anti-immigrant hysteria.

Why has the mass stereotyping of Muslim women and the harkening back to violently colonial stereotypes of “barbarism” not factored into conversations of racial profiling?

Moreover, conversations about racial profiling too infrequently address the racism faced by trans people. In 2014, 55 per cent of all victims of hate-crime-related homicides in the U.S. were transgender women, almost all of them women of colour.

No comparable survey has been conducted in Canada, and the experience here is largely anecdotal. But we know about the mysterious early-morning death of Sumaya Ysl (Dalmar), an activist and trans Somali woman, in Toronto last year. Her friends and family have demanded an investigation, but police stated that there was nothing suspicious about her death, despite the high number of trans homicides – about one every 29 hours, according to worldwide tracking by Planettransgender.com.

As criminal lawyer and doctoral candidate Andrea Anderson reminds us, “Women have also been victimized by the police and often in precisely the same ways as men – police stops, shootings and racial profiling. In addition, they also experience police violence in distinctly gendered-specific ways, such as sexual harassment and sexual assault.”

By minimizing women’s experiences of police violence, we risk forgetting about the stories of Black women like Stacy Bonds.

In 2008, Bonds was detained by Ottawa police late at night and taken into custody. There, four officers cut off her bra and shirt – allegedly for her own safety. It took over three hours for police to provide her with clothing to cover herself. Of the four officers directly involved, one, Steven Desjourdy, was charged with sexual assault he was later acquitted.

Bonds’s experience of police violence remains largely missing from public discussions of racial profiling. How is a case so “appalling,” as the judge in her case described it, so easily erased from the conversations that aim to look at exactly the kinds of injustice she faced? Why do discussions about racial profiling so often default to men’s experiences?

Human rights lawyer Nana Yanful suggests the erasure of women’s experiences may have to do with how we “often forget the ways in which patriarchy affects our own communities.”

We see this in debates on Islamophobia, where Muslim women seem to be called upon to talk only about veiling. Muslim men are more likely to be positioned (both by the media and within Muslim communities) as political and legal experts than Muslim women, as though Muslim women aren’t also experiencing and resisting injustices like Bill C-51 (now enacted as the Anti-Terrorism Act), discriminatory refugee laws and police violence.

Violence against women remains foundational to the colonization of Canada. The cases of more than 1,000 missing and murdered Indigenous women and girls remain unsolved. This is symptomatic not only of the immediate violence Indigenous women face but also of broader state indifference to their well-being.

As activists challenge racial profiling in all its forms – be it by the police or by policy-makers, by our schools or our welfare offices – activists need to simultaneously identify and challenge the pervasiveness of patriarchy, including homophobia and transphobia, within our own social movements.

We need to ensure that our strategies address all aspects of structural racism instead of only those narratives already dominant within our communities. We must commit to amplifying the activism of our most marginalized.