Outside affected communities, the police practice of street checks has been a less talked about hot-button this election. What will it take for people to listen? 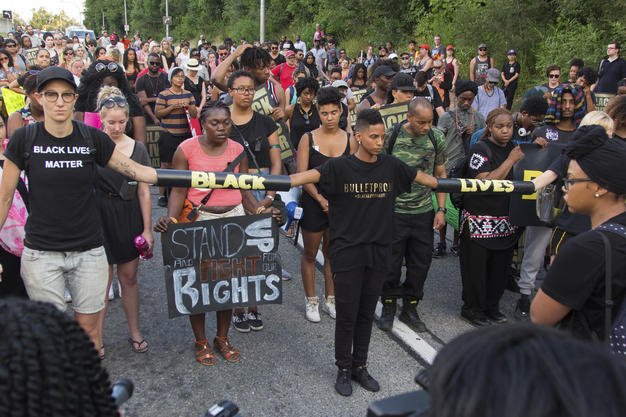 “Canada needs to have many difficult conversations about racism.”

Barbara Hall, former chief commissioner of the Ontario Human Rights Commission, could easily have been talking about #elxn42, given the race-baiting we’ve witnessed in this campaign.

But she was talking about the police practice of carding during a panel discussion on human rights at the Inspirit Foundation’s ChangeUp 2015 Conference at the Ismaili Centre on September 18. Activist/journalist Desmond Cole also took part.

The Ismaili Centre event attracted a diverse crowd of more than 100 people on a Friday night, further evidence that the issue of carding has sparked outrage among ethnic groups beyond the black community.

But the police practice of street checks has been less talked about outside affected communities during this election, despite protests in the streets this summer and considerable exposure through the efforts of Black Lives Matter TO in particular.

For Hall, who is a member of the politically influential Concerned Citizens To End Carding, the slow and painstaking surfacing of carding as a public issue is a source of shame. “Why did it take people like me to get people to listen?”

While it wasn’t addressed at the Ismaili Centre conversation, speculation is growing about the outcome of the province’s efforts to regulate carding. It remains to be seen whether the government will heed the calls to abolish the practice at public consultations last month or choose to uphold the claim that carding has a public safety value.

Enormous questions will have to be answered if regulations promised by the province have any chance of success. Will the new regs end arbitrary stops of racialized people? What happens if police continue to target black youth? Who will bring police to account?

One seldom-discussed, ironic fact is that carding allowed the Toronto Star to uncover discrimination in policing. Without contact-card data, the general public would never have learned that young black men were being stopped and questioned by police at more than three times the rate of everyone else. If carding is nixed, or if it goes underground, how will people know if the police have ceased that practice?

Cole argues that, should the province choose to reform rather than end carding, it will have to be significantly clarified and constrained. In particular, Cole would like to see precise justifications for police stops.

“The vast majority of the cards collected so far have fallen under the ‘general investigation’ category,” Cole says. “What does that mean exactly? We need to make that clear.”

And what about tracking the quality of police engagements with the public? Many feel that a rigorous receipt system is the only solution.

The Toronto Police Services Board’s April 2014 carding policy required officers to issue receipts to every person carded. It also directed officers to proactively inform citizens that they had a right to walk away from non-investigative encounters with police. Receipts were intended to act as a record of the data being entered into the police database. But when former police chief Bill Blair indicated his willingness to go along with receipts in 2013, the number of cards collected by police officers plummeted.

Nigel Barriffe, president of the Urban Alliance On Race Relations, doesn’t see why any well-intentioned police officer would have a problem with issuing detailed receipts. “If those engagements with the public are authentic, there is nothing to hide,” Barriffe says.

Lawyer Jack Gemmell of the Law Union of Ontario wants to see assurances that all police stops, not just those that fall under the “street check” category, are documented. “If you don’t have comprehensive data on all stops, you can conceal discriminatory patterns.”

He says communities will also need to be empowered to assess their own experiences with the police through annual surveys and research-driven reports on community satisfaction.

But those who believe carding should be banned outright do not expect the province’s involvement to make a real difference to those most affected. They point to a history of skilful manoeuvring that has let police duck accountability in the past.

Despite Blair’s much-heralded 2009 admission that racial profiling exists in policing, for example, his former deputy, Peter Sloly, more recently acknowledged that no officer has faced disciplinary action over racial profiling. Police can admit wrongdoing, critics say, but they seem incapable of rooting out wrongdoers.

Resistance to change, and the police’s inability to implement specific measures to deal effectively with corrosive practices, should check any unbridled optimism about the province’s plans, says Chris Williams of the Toronto Police Accountability Coalition. “We’re running up against a culture that supports police impunity,” says Williams.

University of Windsor law professor David Tanovich thinks the government is on course for policy failure. “You can’t regulate something that is unconstitutional,” he says.

Much like the provincial guidelines on police strip searches, rules on street checks will be difficult to implement and monitor, he says. Those guidelines have been continually breached by police. “They know there is no meaningful oversight.” And, therefore, no consequences.

“The government’s consultation approach was fundamentally wrong,” says Singh. “It basically asked, ‘How can we continue to let the police arbitrarily stop you and discriminate against you in a way that is least offensive?’ That’s the wrong question.”

While the anti-carding movement has gained considerable support in recent months, Cole told the packed house at Inspirit that he needs others to join in demanding fair policing. “Don’t be one of these people who says, ‘I’m glad he’s out there doing this work.’ Help me, help us!” Loud applause.

Neil Price is a freelance writer and community worker. He teaches at George Brown College.