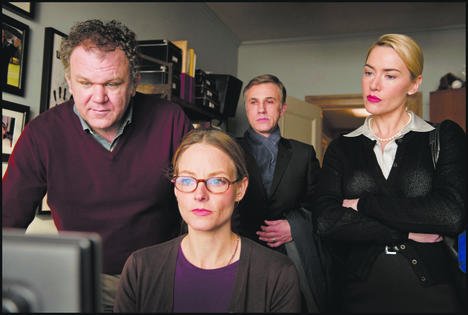 Roman Polanski’s Carnage may not be something you’d call a holiday delight, but it’s a damn fine little picture.

Based on Yasmina Reza’s play, it chronicles one very long afternoon in the Brooklyn home of Penelope (Jodie Foster) and Michael (John C. Reilly), who’ve invited over another couple, Nancy (Kate Winslet) and Alan (Christoph Waltz).

See, Nancy and Alan’s son hit Penelope and Michael’s son with a tree branch. The parents have gathered to write a letter for the school’s disciplinary committee. It doesn’t go well. Conciliation turns to friction, friction to aggression, and aggression explodes into rage – though not before Nancy has already exploded in her own fashion, barfing up some cobbler that Penelope had served. Allegiances shift and mutate, and supportive marriages fracture as the argument reconfigures along gender lines.

Polanski is a master at shooting this sort of thing. Anyone who’s seen his nimble adaptation of Death And The Maiden knows he can turn a static drama into a pulsing, unnerving endurance test. Here, he does it with smart casting and one brilliant visual conceit.

Working with American accents, Winslet and Waltz instantly seem just a hair more composed than Foster and Reilly, which subtly reinforces the class difference between the two couples – and initially puts us on Penelope and Michael’s side. That shifts as the characters reveal themselves, and Polanski exploits our initial response to the fullest, placing the actors in an arena of constant tension, a wall mirror within the frame giving us the sense that the characters are stalking each other – or themselves – through the apartment.

Polanski knows when to nudge, push or shove. When the movie switches from deliberate, locked-down shots to hand-held close-ups, the audience at my screening flinched like they’d been slapped.

Foster and Waltz deliver the most compelling performances – Foster whipping herself into a righteous fury at any provocation, and Waltz cheerfully doing most of the provoking – though Winslet has her moments as well. And while Reilly’s natural affability works against him in a couple of key scenes, he’s by no means a weak link.

If the Academy’s in the mood for intensity, two-time winner Jodie Foster could land a best actress nomination, and Kate Winslet and Christoph Waltz could come away with supporting nods. Roman Polanski can’t be counted out for best director – many believe he was unjustly overlooked for The Ghost Writer last year – and an adapted screenplay nomination seems likely given the picture’s literary pedigree.