CAROLINE, OR CHANGE book and lyrics by Tony Kushner, music by Jeanine Tesori, directed by Robert McQueen (Acting Up Stage/Obsidian).. 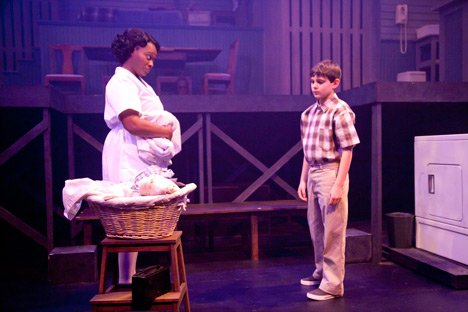 Caroline, Or Change is an amazing show: a slice of history, a rainbow of musical styles and a lesson in life all rolled into one.

This is one of those rare works, both entertaining and thoughtful, that presents characters at a specific moment in time yet manages to give their actions and emotions a universal resonance.

Happily, the Tony Kushner/Jeanine Tesori musical gets a first-class production, directed by Robert McQueen and produced by Acting Up Stage in association with Obsidian Theatre.

In 1963 Louisiana, Caroline Thibodeaux (Arlene Duncan), a black woman, works as maid in the Gellman house. A single mother of four, she leads a frozen life of anger and frustration but is idolized by eight-year-old Noah Gellman (Michael Levinson), whose new stepmother, Rose (Deborah Hay), tries unsuccessfully to befriend Caroline.

To teach Noah not to leave change in his pockets, Rose tells Caroline to keep the money she finds, which Caroline is loath to do. But come Christmas time, with presents to buy and doctor’s bills to pay, Caroline has second thoughts when she discovers a large bill, a Chanukah present, in Noah’s pants.

The result is pain, hurt and – indeed – change in Caroline, her children and the Gellman family, all set to music that ranges from blues, klezmer melodies and spirituals to Christmas carols, Chanukah songs and 60s pop tunes. Tesori’s music, given a fine reading by music director Reza Jacobs and his orchestra, is inescapably toe-tapping, with Kushner’s lyrics a perfect match to the music’s various moods.

His book is just as clever and strong, with characters who include a singing washing machine (Londa Larmond), dryer and city bus (both Sterling Jarvis), as well as a Supremes-style trio (Neema Bickersteth, Jewelle Blackman and Alana Hibbert) in flashy red dresses who represent the radio. Another anthropomorphized figure is the moon (the wonderful Bickersteth again), a figure of inevitable change who presides over the play’s action.

Working on Michael Gianfrancesco’s impressive three-level set, the whole cast is splendid, with first honours going to Duncan’s memorable Caroline. A woman who finds a strange comfort in her rocklike emotional solitude, she’s initially only able to dispense laconic, stoical remarks to those around her. Caroline calls herself “mean and tough,” but as we learn her history and watch her react to what she and others do, Duncan lets us watch this flinty woman finally forced to reveal a core of pain.

Hay is both funny and moving as an outsider Northerner in this Southern culture, her liberal Jewish guilt twinged by all of her interactions with Caroline. Cameron MacDuffee reveals the emotional limbo of her husband Stuart, left playing a solo clarinet after his first wife dies. Levinson makes us care about their needy child, who fantasizes an alternative, happier life in Caroline’s family.

Another key member of the cast is Sabryn Rock as Emmie, Caroline’s teenage daughter, who learns her mother’s true value and suggests, at the final curtain, that change – political, social, emotional – has indeed arrived.

The secondary characters, even if we don’t know their full stories, give the play a further richness. Take, for example, Shawn Wright as Rose’s lefty New York father, determined that the blacks will bring in the revolution he’s dreamed of since the 30s. His fight with Emmie over how change should happen reveals nuanced aspects of black/white tension that most musicals would never touch.

Caroline, Or Change is one big, ambitious show come prepared to think and feel deeply.