Carried Away On The Crest Of A Wave 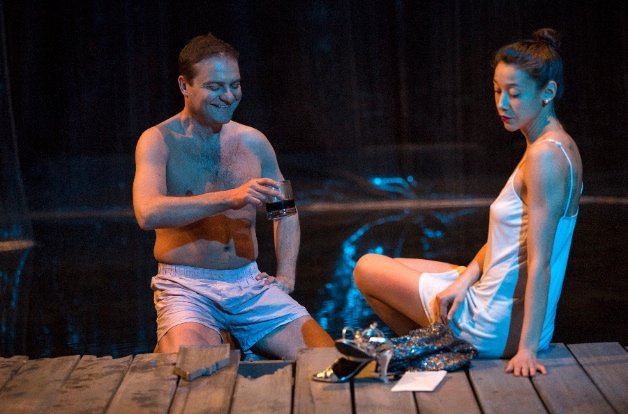 The Indian Ocean tsunami on Boxing Day, 2004, claimed the lives of over 250,000 people. In carried away on the crest of a wave, playwright David Yee shows how others around the world are linked to them and each other.

In one, the floodwaters maroon two brothers (Kawa Ada and Richard Lee) on the roof of their mother’s house in another, a North American man (Ada) confronts a Thai prostitute (Mayko Nguyen) about her past. A third finds a man (John Ng) who’s been falling down a hole for over four years nearly rescued by another guy (Ash Knight), while in a fourth an over-the-top DJ (Richard Zeppieri) satirizes the do-good efforts of North Americans in dealing with the tsunami’s devastation.

Yee’s clever, insightful writing rarely fails to draw a response, whether he’s using his trademark off-centre laughs or a solemn moment to make a point. What’s especially impressive about the script is the various styles he employs, including surrealism, noir, dark comedy and subtle melodrama.

Aquino’s direction and expert staging are just as sharp. Camellia Koo’s set, lit by Michelle Ramsay, has water seeping onto it at the start and contains a small pond by its end the visuals make their own statement about the water imagery so central to the play.

The cast is first-rate, too. Ada and Knight shine in an episode in which a Catholic priest tries to verify the miracle that touched his church but finds that the only man who can attest to the miracle is a Muslim. Later, Ng plays a gruff but practical survivor opposite the young Eponine Lee it’s a tribute to his strong performance and Aquino’s direction that the scene never turns too sweet, nor does the girl’s totally cute charm overwhelm the narrative.

One of the best scene has Zeppieri buying the services of Nguyen – she’s another prostitute here, quite different from her other role – for sex and more. He’s hot, she’s cool, and their combined chemistry is magical. In another, a Utah housewife (Nguyen) and survivor of the tsunami has an uncomfortable visit from an FBI agent (Lee) the action takes several unexpected turns.

Not every scene succeeds occasionally one ends without the intended payoff, but the overall quality is high. Yee’s point about our all being connected and intended to help one another – about how the ripples of this particular tsunami are still felt today around the world – is nicely tied up at the end.