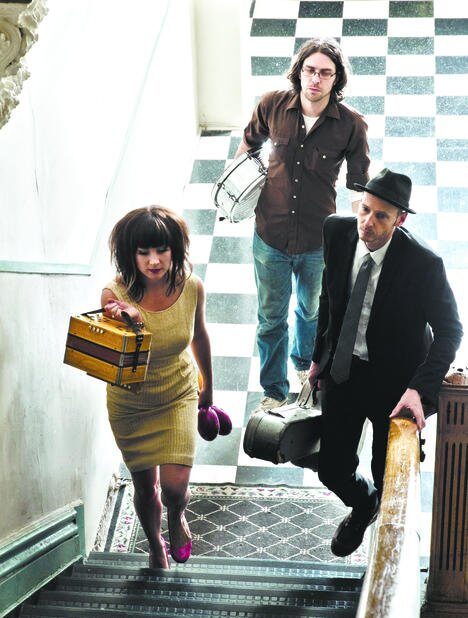 When bands face a large setback, they tend to handle it in one of two ways: collapse under the pressure or rebound twice as strong. Fans of rollicking rhythm and blues will be happy to know that local heroes Catl have taken the second route.

The Delta-blues-inspired rockers were halfway through the recording of their third album, Soon This Will All Be Gone (weewerk/Catl), when drummer Johnny LaRue abruptly quit. His absence was quickly felt beyond the kit. The founding member – he and singer/guitarist Jamie Fleming started as a duo in 2007 – was also the band’s manager, administrator and, often, concert booker.

“That was a big shift,” admits Fleming over coffee and cigarettes at Saving Gigi, seated next to co-vocalist/organist Sarah Kirkpatrick and new drummer Andrew Moszynski.

“We’ve had to take on a lot of new responsibilities,” adds Kirkpatrick, “but we got bits and pieces of advice from other people and then kind of charted our own path.”

A member since 2009, Kirkpatrick has since taken over much of the band’s publicity, excitedly handling their Twitter and Facebook accounts. (She took “a million photos” of the Catl-themed display currently in the window of Sonic Boom.)

Kirkpatrick’s increased presence is also apparent on the new album. She sings lead on a few songs and even tackles the drums on first single Gold Tooth Shine.

Though much of Soon This Will All Be Gone was recorded live off the floor, the album incorporates more layering, overdubs and studio magic than Catl’s earlier recordings while maintaining their trademark bourbon-soaked grit.

“A record’s a document of what you’re doing, for sure, but at the same time you’re using the studio for what it can offer,” says Fleming. “If you want to come see us live, come see us live.”

Their furious live energy is an experience on its own, and it’s only intensified by the addition of powerhouse drummer Moszynski, former stick man for late Toronto garage rock institution the Deadly Snakes.

Meanwhile, Kirkpatrick’s dance moves are a sight to behold, and Fleming exudes more energy than you’d expect from a seated guitarist.

“I’m totally wearing out the ass of my suit,” he jokes.

As part of their new professional approach, Catl went through the process of getting licenses for every song they covered on the album. Here, they explain why that process was nowhere near as easy as they thought it would be.

The band explains how they decided upon Andrew Moszynski as the new drummer, while he makes a case for being the busiest musician in town.

In the past, Fleming had claimed that Catl would mostly be a local band. With the addition of Moszynski, however, they’re taking steps to do their first proper tour, including a jaunt through the United States.

Fleming explains why, despite the title of the album, Soon This Will All Be Gone, he plans on keeping Catl going for as long as he possibly can.