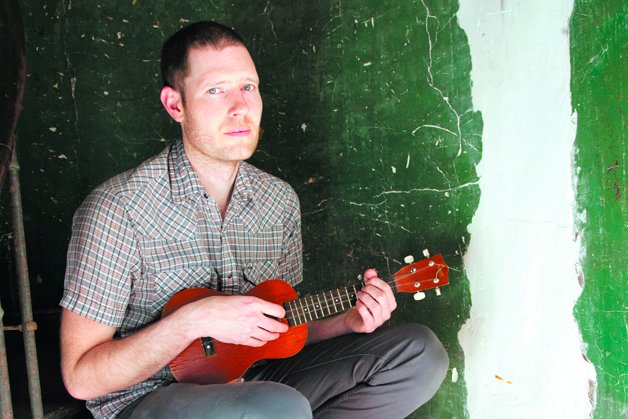 A still from Chad Vangaalen's video for Beat The Drum Slowly

“Have you always been really tapped into your imagination?” I ask Chad VanGaalen, who is just waking up in a Boston hotel after playing a show to disappointed Bruins fans the night before.

“Oh yeah, for sure. It’s completely distracting. Nothing has really changed [since I was a kid]. I’m a man-child.”

“Man-child” is often used disparagingly, but in VanGaalen’s case, his travels down the wormhole of his imagination have earned him the most inspiring of careers: revered weirdo-folk musician with a willowy voice, tender melodies and disturbing lyrics music video animator and illustrator to the indie rock stars producer of experimental albums by Women and others maker of homemade instruments like a double kalimba creator of comic series ZOOOSH. Whatever strikes his fancy.

The latest project from the Calgary artist’s fertile mind is fifth album Shrink Dust (Flemish Eye), made in concert with a still-in-progress animated sci-fi film called Translated Log Of Inhabitants, his first feature. He’s careful not to allude to Shrink Dust as the film’s soundtrack, however.

“They were informing each other as I was recording them alongside each other,” VanGaalen explains. “There are elements of Shrink Dust in Translated Log, and Cosmic Destroyer, the last song on the record, is about the characters in the animation. But it’s not like Spider-Man 3, where there is this epic, two-minute montage of somebody getting his ass kicked while the most banging track on the record is playing.”

The deaths of his dog Lila and of Women guitarist Chris Reimer (who died in his sleep) also informed the album. The song Lila is a direct tribute to his canine friend, while Reimer’s influence is more nebulous.

“I don’t even really feel like I understand what happened with Chris. To this day I feel like that was total bullshit. It was like he got swept away into nowhere land for no good reason, so it’s a total shame,” VanGaalen says. “The first song [Cut Off My Hands] is probably the most direct analysis of what was happening in my mind at the time as far as feeling lost. But with Chris’s presence, I didn’t want it to be this thing that was so obvious. For my own sake, I like to keep that a little more private.”

VanGaalen has emerged from the darkness. He jokes easily and gets excited talking about his six-year-old daughter’s critiques of his work. (Too many boring leaves on a branch, she said of a recent illustration, and not enough guy-with-a-shoe-for-a-head.) And despite being 15 or so years into a music career, making sounds still inspires him.

“I still love making music. I don’t know about songs. Songs get weirder and weirder as I get older. It’s more of an abstract notion to be, like, here’s a three-and-a-half-minute song. But in terms of making music, just sort of random stuff, I sit down whenever I can and hack away at sounds. I’ll always love that.

“I live in a dream world of total insanity,” he laughs. “It’s hard not to be excited about it.”