Show is strong though theme's opaque 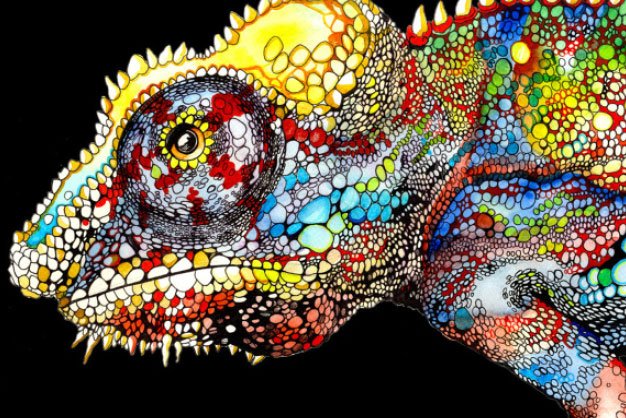 The show at Robert Kananaj is named for Clara Bacou's Chameleon.

The show at Robert Kananaj is named for Clara Bacou's Chameleon.

In the enigmatic group show Chameleon, curator Robert Kananaj continues his mission as a mentor and incubator for young talent.

Britain’s Clara Bacou, 16 years old but already prolific, contributes two small works on paper, including the signature Chameleon. Her style has a bold, swirling liquidity that blends the best of urban wall art with illustration and dashes of Japanime.

Silvia Argiolas‘s totemic, clustered paintings of girls preening and hanging out radiate a thick cloud of eroticized menace, somewhere between Balthus and Cecily Brown. She often blurs together the rich, often ominous subconscious imagery of childhood with young womanhood, creating a new punk-rock visual mythology in the process.

Queer firebrand and long-time activist Bruce Eves is tucked into the far left corner of the show. His imagery, graphic in both senses of the word, marries sober visual constraint with a disruptive visual and political punch. In Self Portrait #4, for instance, he reduces himself to a few disjointed elements: a pair of socks, two ears, two hands and a pair of glasses nailed to a stark black-and-white grid.

The right half of the gallery is given over to young conceptualist upstart Oscar Figueroa. His ephemeral conceits – a stepladder under a cardboard cutout of a cloud, a piece of marble on the ground before a door papered shut, an entire box of Froot Loops on a string – suggest a restless and extremely involved thought process about material, event and representation.