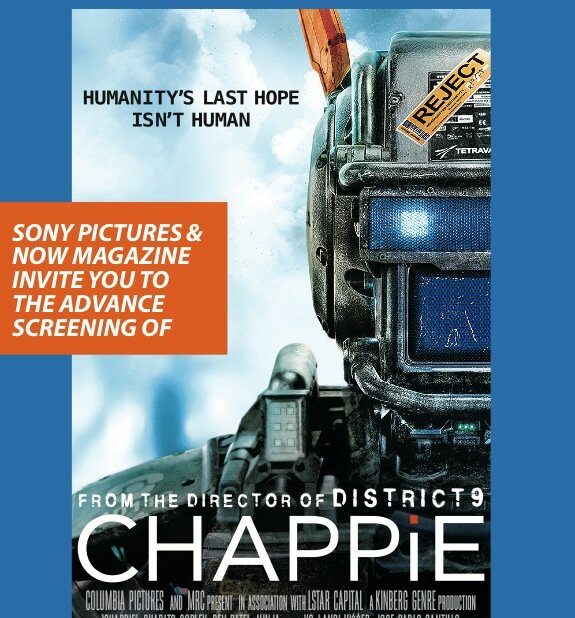 Chappie is Neill Blomkamp’s third feature film, following District 9 and Elysium. It is also the third time he’s delivered an assaultive, numbing action exercise built on a basic formula of clumsy heist plotting, gangster swagger and spectacular violence, with just enough near-future imagery to make it seem like deep meaning is in there somewhere, if we just keep digging.

Blomkamp’s genius, at least in terms of marketing, is that he can always find a simple, easily digestible metaphor on which to hang his sloppy, derivative action mechanics. District 9 was “apartheid, but for aliens” Elysium extrapolated contemporary class conflicts and fears of migrant workers into a future where the rich are literally above it all, safe and sound aboard a space station while the planet’s poor are left to the ash-heap.

Chappie freely lifts ideas, images and soundtrack cues from RoboCop and The Terminator and bundles them into a promising pitch: What if a robot – in this case, a scrapped police scout – attained sentience and hung out with bad guys, learning gangster moves?

In the near future – when Anderson Cooper still has a show on CNN, but South African punk rockers Die Antwoord are actually the crank-headed thugs they now only pretend to be – Johannesburg is the first city to supplement human police officers with robot “scouts.” And at pioneering security company Tetravaal, genius designer Deon (Dev Patel) is just steps away from finishing an AI program (called, adorably, “consciousness.dat”) that will allow a robot to learn and grow rather than just follow its programming.

Deon’s plans are disregarded by his boss (Sigourney Weaver), who doesn’t see the point of a robot that might appreciate art or write poetry, and a rival designer (Hugh Jackman) who just wants Tetravaal to green-light his Moose project, a remote-controlled robot pacifier that looks remarkably like RoboCop’s clunky comic relief, ED-209. But then Deon and his truckload of robot parts are carjacked by idiot thugs Ninja and Yo-Landi (Die Antwoord’s Ninja and Yo-landi), who demand he build them a robot sidekick. And Chappie is born – a sentient robot with a child’s innocence, an unlimited capacity for learning and a five-day lifespan thanks to a borked battery.

As a character, Chappie is pretty impressive. Performed in motion-capture by Blomkamp’s go-to star, Sharlto Copley, he’s convincing as both a physically present CG creation and an emotional being. But all Blomkamp wants Chappie to do is run around shouting frantically at people. In fairness, that’s all he wants the other characters to do as well.

Chappie the character makes instant sense – he wants to live, he wants to learn, he doesn’t want to hurt anyone or be hurt himself. But Chappie the movie doesn’t even try to fit its various moving parts together. It doesn’t even seem to know what it’s doing from moment to moment, both narratively and in simple formal terms.

Jackman’s character, a robot designer who’s also a gun-toting religious maniac, is the movie’s villain, but Blomkamp seems to have only figured that out in post-production. There’s also the bizarre decision to subtitle the dialogue of Ninja and Yo-Landi’s primary antagonist (Brandon Auret) despite the actor always being perfectly intelligible. The movie’s loud, but it’s not that loud – and if anyone needs help being understood, it’s Ninja and Yo-Landi, who are such terrible actors that they can’t even convincingly play themselves.

Ultimately, there’s nothing in Chappie that Blomkamp hasn’t done before, and better. District 9 made better use of South Africa, and its CG characters were given much more to do than this film’s robots. And however dumb it was, Elysium had a more interesting heist plot and Matt Damon’s complex leading performance to keep us watching. Chappie just repeats a lot of the same moves with robots, defaulting to shootouts and explosions whenever Blomkamp worries our attention might be lagging. Any potential in the concept is beaten out of it long before the ludicrous final movement.