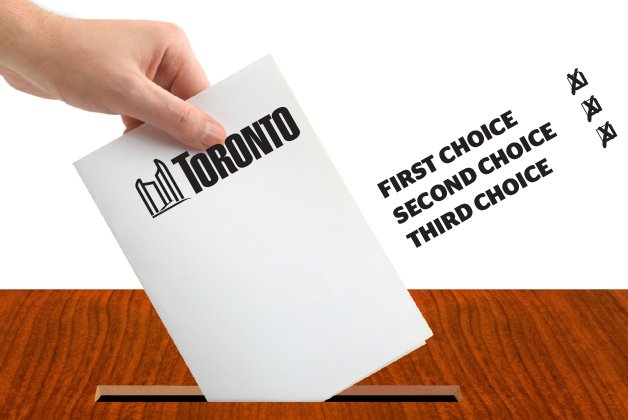 The city’s Government Management Committee deadlocked over it, but a proposal to dramatically change the way Toronto does elections will head to council next month.

At the committee meeting Monday, May 13, Councillor Paul Ainslie tabled a motion to pursue ranked ballot voting as a replacement for our current “first past the post” system. The motion died on a three-three tie, with the body split evenly between the mayor’s conservative allies and centre-left councillors.

But city procedure dictates that a staff report on voting reforms will go before council on June 11 without recommendations, and Ainslie says he will put forward his motion again.

“I think there’s a lot of politics at play around the table today,” Ainslie said. “Hopefully, there will be less politics on this matter at city council as a whole.”

Several other motions that also lost on a tie, including one that would ask the province to allow non-citizen permanent residents the right to vote, are also expected to resurface at council.

Dave Meslin, of the Ranked Ballot Initiative of Toronto (RaBIT), has been championing electoral reform for several years and is thrilled that the issue is finally on the agenda. He claims that 23 of council’s 45 members have pledged to support it if it comes to a vote.

“We’re pumped. We’re really excited that it’s moving forward,” he said outside the meeting Monday. “This is a topic that three years ago no one was talking about. And now it’s on the radar.”

Under the ranked ballot (also called instant-runoff) system RaBIT advocates, instead of choosing a single candidate, voters list their top three choices in order of preference. When the ballots are counted, if no one achieves a majority of first-choice votes, the candidates with the fewest votes are eliminated and their support transferred to voters’ second choice. The process continues until there is a clear majority winner.

Supporters of ranked ballots argue that the system would not only ensure that no one could be elected with less than 50 per cent of the vote (21 of 45 council members won without a majority in the 2010 election), but would also fundamentally improve campaigns by eliminating strategic voting and allowing candidates to run without fear of splitting the vote between themselves and other politicians of the same stripe.

Ranked ballot voting is used in several U.S. cities, including San Francisco, where it was instituted for board of supervisor elections in 2004 and mayoral votes in 2011. Meslin would like to see Toronto adopt it for the 2018 mayoral race and then, if all goes well, the 2022 elections for both council and the mayoralty.

But some members of the committee were skeptical. Councillor Vince Crisanti complained that the runoff method would produce a “fabricated majority.” Councillor Doug Ford, the mayor’s brother, said the only reform council should be focusing on is creating a U.S.-style “strong mayor” system.

City staff have also raised several concerns. The city would have to order new voting equipment and hire more workers to monitor election stations, according to a staff report. Experts would likely have to be hired to assist with the “complicated algorithms” involved, and vote-counting would take days instead of hours. The process “could be confusing to electors” and lead to “frustration and longer lineups,” the report said.

But Meslin dismisses the idea that the system is too complicated. “Data from cities that use ranked ballots clearly shows that it’s as easy as one, two, three,” he said. “People do way more complicated things when when they bake a cake. I think they can figure it out.”

If council does approve Ainslie’s motion next month, it won’t immediately change how we vote. Only the provincial government has the authority to amend the Municipal Elections Act. Ainslie’s motion would ask Queen’s Park to change the law. The idea would also likely have to be approved by a city-wide referendum.

Asked in an email if the province would consider changing the act, a spokesperson for Minister of Municipal Affairs and Housing Linda Jeffrey responded: “The government reviews the Municipal Elections Act after every municipal election. We carefully consider any recommendations the City makes.”