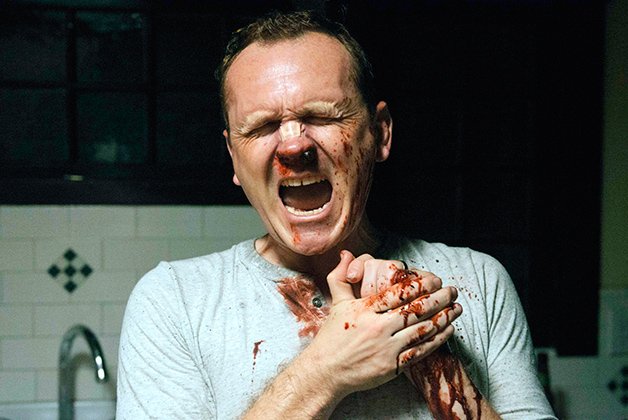 Pat Healy is bloody good as a guy who suffers for a big payday.

Cheap Thrills is the indie thriller version of Magic Mike, where the question of what a person will do for money in contemporary America is answered with “get really bloody.”

Pat Healy is Craig, a mechanic in dire financial straits. His family is facing eviction from their crappy Los Angeles apartment, and he’s just been downsized. Drinking at a bar so he won’t have to break the news to his wife, Craig and an old friend from high school (Ethan Embry) are approached by a wealthy couple (David Koechner, Sara Paxton) who offer them cash to take a series of dares that grow darker as the financial stakes rise.

All four actors are great. Healy’s terrific as a man forcing himself to endure profound suffering for a quick payday, Embry uses a Brad Pitt impression to appear tough, Koechner is marvellously obnoxious as their chipper tormentor, and Paxton (who co-starred with Healy in The Innkeepers) is nicely ambiguous as Koechner’s bored trophy wife.

The ending also doesn’t punk out, which is something you can’t say for a lot of thrillers these days.