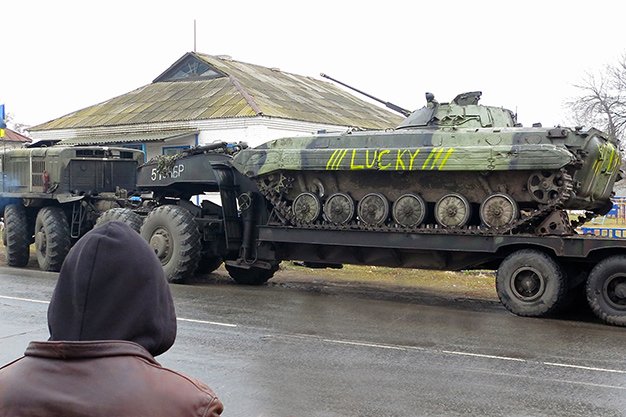 When I agreed to put on a concert for Ukrainian soldiers defending Shchastya from Russian invasion, I did not envision lying on canvas sacks of second-hand sweaters and plush toys.

Or being wedged between treadless tires and a WWII-era iron stove in the unheated back of an orange Mercedes transport truck on a treacherous road in a convoy of vehicles hauling missiles, rockets and a tank named Lucky. This is what volunteer humanitarian aid looks like in a country unofficially at war.

The Kyiv-born driver of our truck, Ihor, is a jovial landscape architect who served the USSR in three wars (Armenia, Afghanistan and one he won’t name) before being discharged for “health reasons.” His co-pilot, Oleksij, a snowboard shop owner, has a wife in Italy and a sick daughter at home in Ukraine.

“She’s pissed off at me,” Oleksij says about his wife as we pull up to the first of many checkpoints in Luhansk province in the so-called anti-terrorist operation (ATO) zone.

“I promised I wouldn’t go [to the front] until she got back from Europe, but how could I not? The people need our help.”

I’m nervous, buried in the back of the truck under sleeping bags, contemplating recent reports of artillery fire and deadly sieges at nearby check-points 31 and 32.

Ihor rolls down the window, hands a fleece balaclava to an AK-47-toting guard and asks if he’s staying warm. The soldier’s reply: “You got any winter boots in there?”

“I don’t know why they call it ATO,” continues Ihor as we pass the checkpoint. “There are no terrorists here. All the ideological separatists either fled, were killed or are in hiding. All that’s left is Russian soldiers. Anyone will tell you.”

“How do you know they’re Russian?” I ask.

“Their aim. They’re highly trained on advanced technology. Ukrainians don’t have that shit, and separatists don’t know how to use it. You ask any guy on the front line – the artillery rounds coming from the other side hit their target first time, every time. That and the passports on the corpses.”

He slows down as we approach the next checkpoint, in Svatove, but the soldier waves us through.

Soldiers from the Aydar Battalion, whom we meet up with later taking a break from all-night fighting in Starobilsk, corroborate Ihor’s claim. They’re a ramshackle bunch, mostly volunteers in mismatched fatigues and a few locals who make day trips to fight at the front.

One grizzled vet smokes a pipe and sports a “chub,” the hairstyle of the dreaded Cossack warriors. These men have seen real war. They’ve lost friends and family members to artillery fire that hasn’t stopped in spite of a ceasefire agreement signed by Ukrainian president Petro Poroshenko, Russia’s ambassador to Ukraine and the newly elected leaders of the breakaway republics. Ukraine’s foreign ministry reports 100 servicemen dead, 600 wounded.

Both sides have never stopped firing, actually, and they’re both increasing deployments in the conflict zones across eastern Ukraine.

“It doesn’t look like it’s going to stop any time soon,” says a local soldier named Vitya, contemplating a pair of doves on his neighbour’s roof. “But we can’t leave. Our families are here. There’s nowhere else to go.”

Before the war started last spring, Vitya was a furniture-maker sharing a modest home with his wife and two sheepdogs on a dirt road in Mostky.  When the conflict with pro-Russian separatists escalated, Vitya was one of five men in his village of 2,400 to pick up a machine gun and train. One of them is now fighting to keep pro-Russian forces from taking over the Donetsk airport, opened for the 2012 European soccer championships.

“I never dreamed of being a warrior,” Vitya continues, as we prepare to entertain weary troops. “But this is not a dream. This is our reality. Tomorrow I’ll go back to Shchas-tya so that one day I can go back to making furniture.”