No. 1 The Tempered Chefs Kraft Dinner pieLong before he opened his Parkdale patisserie, the Tempered Room, in September, chef. 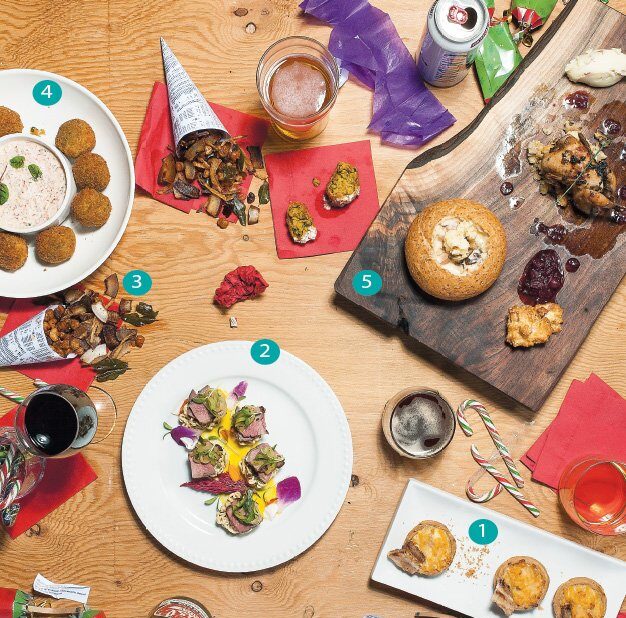 Long before he opened his Parkdale patisserie, the Tempered Room, in September, chef Bertrand Alepee (aka the Tempered Chef) was best known as one of the citys go-to caterers. Hes still cooking for parties, and for this challenge he added bacon, aged cheddar and Gruyere to the fluorescent-coloured mac-and-cheese mixture (he also used the rendered bacon fat to make the pie crusts). He then topped off the pies with a royale, a mixture of cream, egg, milk, salt and nutmeg thats commonly found in quiches.

No. 2 The Food Dudes ramen latkes

When it comes to hors doeuvres, chef Dan Frenette has it down to a formula. You get one bite and one shot, he says. Textures are huge, and everyone loves something thats crispy. Its also about a balance of flavours: a combination of sweet, salty and spicy always works well. Separately, the flavours may be too intense, but together they balance out. He combined all those elements by starting with a crunchy base of instant noodles (Sapporo Ichiban chicken, FYI) flavoured with the included spice packet, lemon juice and zest, chili and chives. On top is a slice of medium-rare duck breast seasoned again with the ramens flavour packet and cucumbers marinated in a chili-rice vinegar mixture. The sweet component comes from a pineapple-coconut sauce on the bottom of the plate.

No. 3 and 4 McEwans Sri Lankan-style chickpea cones and poppers

Chef Shen Ousmand spent nine years cooking his way up in the McEwan empire and is now in charge of catering as well as prepared foods at the McEwan food shop. Ousmand couldnt decide on one chickpea snack, so he made two (hummus was forbidden since thats too easy). The cones are a take on a popular street food hed eat often while growing up in Sri Lanka: fried chickpeas and coconut flakes tossed in a spice mixture of ginger, cayenne, curry leaves, garlic, smoked paprika and cinnamon. Its something youd eat with one hand and drink beer with the other, he says. The poppers are crispy-on-the-outside, creamy-on-the-inside chickpea, potato and spinach balls spiced with coriander, garlic, anise, cinnamon and cardamom, paired with a cool yogurt dip made with cucumber, lime juice and Sriracha.

The long-standing chicken wholesale shop in Kensington Market got an overhaul recently, hiring chef Bernadette Calpito to create a line of prepared foods, a takeout counter and a catering arm to keep up with the neighbourhoods changing tastes. Having lived in Hawaii, Calpito jumped at the opportunity to cook with Spam. I grew up with Spam, she says. Everything in Hawaii is imported, but Spam is really accessible and affordable. Canadians have bacon, Hawaiians have Spam. She created a platter of miniature Christmastime staples: mashed garlic potatoes with crispy Spam bits, buttermilk biscuits with Spam, a cream of mushroom and Spam soup in a bread bowl, and a roasted quail with a Sriracha-maple glaze and a stuffing made of the Spam biscuits. I think I spent $9 on the whole thing.