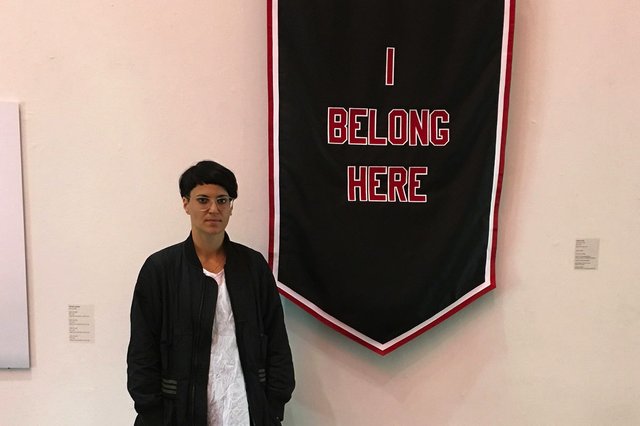 When I catch up with Chicago-based artist and teacher Cheryl Pope, she’s at OCAD doing a timely remount, a few days after the June 12 Orlando shootings, of a workshop that was part of her earlier collaboration here: making protection necklaces.

You write what you want to protect in your life and what you want to be protected from on a small piece of red cloth that you fold and sew into a pendant on a chain. “They really work,” she says. “People respond to the magic of it.”

Pope, whose projects connecting art and sports have taken her to U.S. high schools and colleges, met with OCAD students for two days to create Pride Month exhibit Objects For Listening, a series of varsity-style banners that hang in the school’s second-floor Great Hall. Their words are gleaned from two intense day-long workshops that explored issues of self and identity in relation to Pride and other communities. (The exhibit is rounded out by a selection of student explorations of identity.) 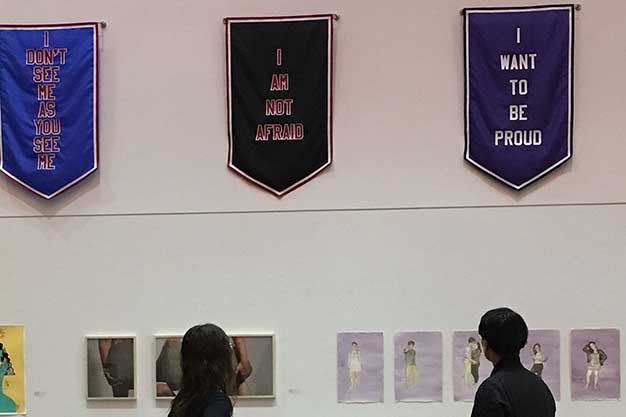 For some students, “Pride felt a little too singular – a white, male, sexualized day that didn’t feel inclusive. They felt more like witnesses than participants,” says Pope. “The workshop included two circles: The tag of Pride creates a stereotype of a community, so how do people feel within that tag? And how do people feel just living in the city?” Many saw the Pride community as more exclusive than the city in general.

Pope has selected statements like “I want to be proud” and “No one sees us anyway” that can resonate with anyone, transcending specifics. Her focus on deep listening allows her to delve into the intersectionality of gender, sexual orientation, race and other identities.

Training as a boxer made her understand how to listen “not just with the ears, but with the body. When I started boxing, I had to physically beat something out to get deeper in myself, to physically remove something.” She’s formed close relationships with the guys she boxes with. 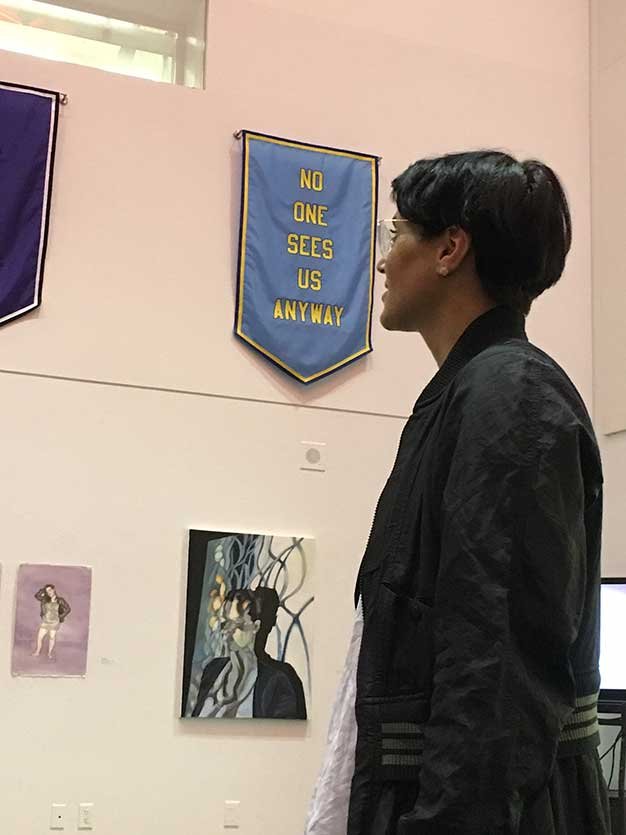 Sports, like art, operates non-verbally. But unlike art, “everybody knows how to read sports,” so the banners and the trophy urns she made from donated china for a previous project are something people understand without thinking.

From here she’ll go to New York City to talk to youth at street basketball courts, which she sees as “democratic, self-governed” spaces. She’ll set up a mobile boxing ring where short bouts – “Everybody loves violence, so boxing is any easy win” – poetry readings and rap performances can happen between games.

Pope finds people at sports events receptive to changing it up through art interventions and hopes to continue making connections by, as she puts it, “building a relationship of trust, through confidence into complexity.”