Childish Gambino at the Sound Academy 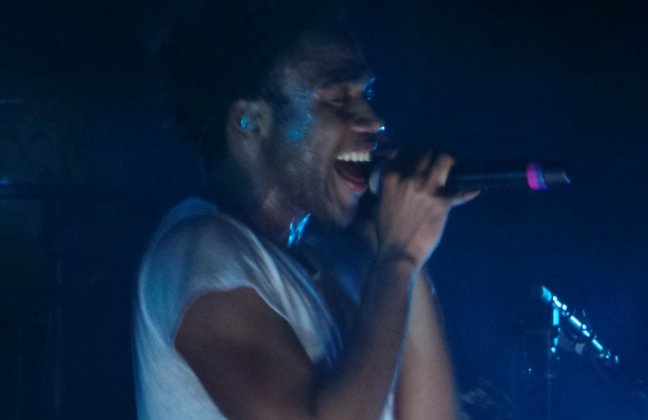 Childish Gambino set the tone for Monday’s show before he even took the stage. Projected live on a large screen was a running commentary and drawings from the audience, communicated through a Deep Web app. This proved mostly immature (dick pics galore), often funny (“because the dial-up internet,” someone chimed in when an unrelenting busy signal kept beeping at us through the speakers) and sometimes mean (someone inevitably telling someone else to STFU). Gambino seemed to moderate, though, throwing in a thought of his own every once in a while.

On schedule at 9 pm, a giant loading bar appeared onscreen, signifiying the rapper’s imminent arrival. And so began Gambino’s part concert/part art installation/part theatre show – a fully realized manifestation of his high-concept album Because The Internet.

Full band in tow, he began with a few songs from that record: the spooky vibes of opener Crawl matched the ever-morphing futuristic visuals The Worst Guys was the perfect showcase for Gambino’s fully committed, arms-out, shoulder-bobbing dance moves a mid-tempo rendition of Shadows gave the band an opportunity to jam, and provided one of the first of many times Gambino would show off his pipes.

There was a lot of singing, in fact. Gambino’s got a lovely falsetto, and he indulged it frequently. Midway through the show, he performed a few songs behind a translucent screen. It was like watching a lounge singer quietly coo, except that a circa-1996 screensaver blob swirled in front of him. It wasn’t the most captivating part of the performance, but denying Gambino those creative tangents would be like booing Kanye during his 20-minute auto-tuned speech on the Yeezus tour. This is what you’re going to get from a capital-C creative.

Still, Gambino was most in his element when assaulting the audience with fiery verse. He broke out of the dreamy interlude with a high-energy Pink Toes singalong, then made a welcome return to his squeaky, mile-a-minute, piercing flow on 3005 – head confidently bobbing from side to sidee.

Eventually Gambino changed out of his heavy black sweater to reveal a sweaty short-sleeved white tee, and eventually he also – to everyone’s glee – broke out some old classics: Heartbeat from 2011’s Camp and Freaks and Geeks from his very first EP.

It’s a good thing the 3-D projections were so nifty – sometimes you were inside Gambino’s living room with his band while a fire blazed in the hearth and the scenery changed outside the windows, sometimes the stage was all black except for pouring rain, sometimes Gambino rapped in front of blinding, beaming lights – because the Sound Academy’s questionable sight lines and the rammed room made it tricky to see him all the time. You could always hear him though, which is, of course, the main thing.

By the hour-and-a-half mark, Gambino was extremely hoarse – though you could only tell when he spoke. His singing voice was still silky, and he closed out with some freestyle singing. Cue spirited clap-alongs, and big screams whenever he name-dropped Toronto or the Raptors.