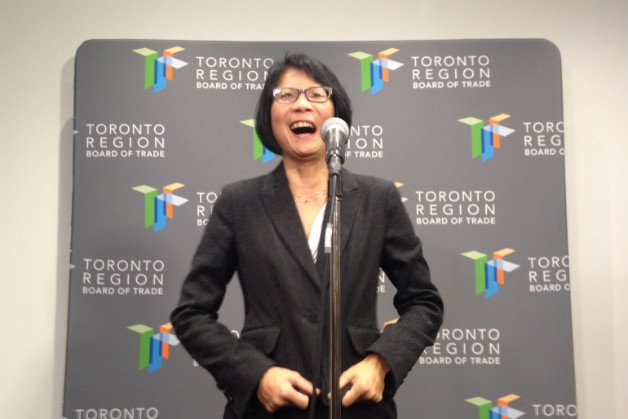 Karen Stintz boasted hers was “a real plan” that would finally get new transit projects built. Olivia Chow countered by vowing “specific long-term solutions for transit.”

But in reality both plans are full of holes, and leave big question marks about where the funding for desperately needed new transit will come from.

First, let’s take a look at Stintz’s proposal. She wants to raise $1.6 billion over 15 years from four sources:

– $700 million by reallocating revenue from the Toronto Parking Authority

– $114 million from a new three-dollar levy on roughly 8,700 TPA spots in downtown garages

Of the $1.6 billion, $1.2 billion would go to funding the city’s portion of the first phase of the relief line subway, which will cost an estimated $3.2 billion. Stintz would ask the province and federal government to contribute the rest of the money for the line, and would use her remaining $400 million for other transit priorities like more efficient traffic lights.

Sounds simple doesn’t it? Except it’s based on some huge assumptions.

For one, the province places a punitive 33-per-cent tax on a city’s sale of municipal utility shares over 10 per cent. To raise the $500 million Stintz wants she would have to convince Queen’s Park to waive that tax.

Currently, that $68.5 million is being used to deliver city services, and if Stintz reallocated it to transit she would have to either replace that money by raising equivalent revenue or cut those services.

Her spokesperson, Lauren Souch, says raising property taxes to plug the $68.5-million hole isn’t on the table. Instead, Stintz “would undertake a strategic review of the city’s budget to find any spending offsets” and “efficiencies.” In other words, cuts.

To give you some idea of how much Stintz would have to offset every year, $68.5 million is roughly the net cost to run the entire public library system for about five months, or the Housing First homelessness program for an entire year.

Souch wouldn’t say which departments Stintz thinks are ripe for cuts. Without identifying where the offsets would come from, the former TTC chair’s platform amounts to moving money around the city budget, not actually finding enough money to pay for anything.

Also: building subways by finding “efficiencies.” Where have we heard that before?

It can be broken down into short, medium, and long-term priorities.

– Medium-term: Cancel the 30-year, 1.6-per-cent property tax increase for the Scarborough subway and revert to the provincially funded LRT plan.

1. Negotiate a return of provincial funding for 50 per cent of TTC operating costs.
2. Secure provincial and federal funding for the relief line and the TTC’s state of good repair backlog, which is at $2.7 billion. The city would pay its share of the two projects the same way it’s currently funding the Scarborough subway: borrow up to $1 billion and pay it off with a tax increase of about 1.6 per cent for about 30 years.

Like Stintz’s plan, there are some major “ifs” in Chow’s proposal. One of them is that she assumes the provincial government, which has committed to the Scarborough subway, will agree to pay for the LRT instead. If whatever party is running Queen’s Park come October doesn’t agree, the rest of her plan is pretty much shot.

It’s her long-term proposal that makes a big leap of faith. She vowed to engage in an “urgent conversation” with Queen’s Park and Ottawa to negotiate funding for both a downtown relief line and the TTC’s state of good repair needs. Only once those negotiations are complete would Chow commit the city’s share of up to $1 billion. Her spokesperson said that could take at least four years, her entire first term.

And, if the province and federal governments don’t commit the funding: “If they say no then we don’t spend that billion dollars,” said Chow, and no transit gets built.

Asked whether the relief line or the state of good repair was her priority, Chow said both were. Asked how much of the billion dollars she would allocate to each need, she said it depends on what the province and feds do.

Asked what makes her think she will succeed in convincing other governments to invest billions in Toronto transit when others have been asking the same for years, Chow said: “Because it’s right. It’s just, and the people of Toronto deserve no less.”

She has a point. The city can’t possibly fund all of its transit needs by itself, and we should be talking about getting help with operations and state of good repair costs-which are needed to keep the existing system running-as much as we are about new subway lines.

Yet with so many details left up in the air, is Chow’s plan really a “specific long-term solution” for Toronto’s transit woes?