It's at an intimate gathering in a Scarborough living room that the particular talents of Olivia the person, not Olivia the idea, are most apparent 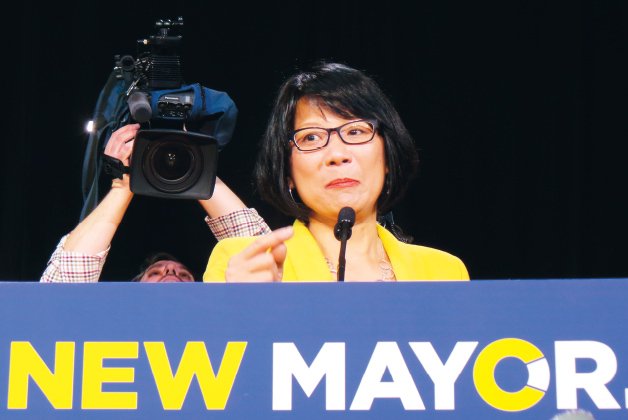 Olivia Chow throws her whole body into it.

Describing the rickety clunk of the aging Scarborough RT, she mimics the swaying and the whirring and the k-chunk, k-chunk sounds that have become key parts of the rider experience. She contrasts this to the elegant gliding of Vancouver’s SkyTrains, which she depicts with hand movements and an elongation of the “oo” in the word “smooth.”

On the third day of her run for mayor of Toronto, rock star candidate Olivia Chow is doing a private acoustic set. And it is in this environment that her particular talents – her ability to connect, to share her passion, to talk about issues deeply and honestly – are most apparent. She’s Olivia the person, not Olivia the idea.

Many of the young professionals and students gathered in the living room of this Malvern house on Saturday, March 15, are on board with her contention that LRT (or, as her campaign has branded it, “overground” transit) is the way to go for Scarborough. Others here are less sure, wary of seeing the subway-versus-LRT debate reopened yet again.

She has come here to make her case on this and any other issue about which anyone wants to ask a question. And she has come alone, without even the barest of an entourage.

She holds the room with her intelligence, showmanship and compassion, making the teleprompters at her larger events seem that much more silly. She doesn’t even wear a button, just her Wario-like purple and yellow campaign colours.

Three and a half months earlier, Chow appeared on CrossRoads, a current affairs program that airs Sunday afternoons on Tamil Vision International. She told host Parthi Kandavel she was “actively considering” a run for mayor. I was also a guest on that episode (albeit in a different segment) alongside journalist Naheed Mustafa, discussing the intersections of race, class and politics in Toronto. The TVI studios are in Rexdale, a few hundred metres from Steak Queen, Mayor Rob Ford’s favourite non-chain fast food restaurant.

And now on Saturday, I find myself with Kandavel and Chow once again, but on the other side of the city, near Sheppard and Progress. Kandavel, a teacher who ran for trustee in 2010, and his wife, Anu Sriskandarajah, are hosting a “Scarborough Salon” in their living room, at which Chow is the guest of honour.

About 30 people have shown up for the off-record event, most of them in their 20s and 30s and largely drawn from Kandavel’s extended network of politically engaged acquaintances. It’s a mix of Chow supporters and the curious.

There are chips and veggies, kothu roti and drinks.

After a brief speech, Chow fields questions for over an hour: on transit, after-school programs, racial profiling by Toronto police, the culture of the TCHC, operational models for community centres and more. She makes a point of alternating between men and women when choosing questions, and she’s having fun, flaunting a bring-it attitude. Her candour and knowledge of the issues are impressive (even if there are a couple of blank spots) and a welcome change from the sound-bite platitudes that all of the campaigns are trying to perfect.

The general appeal of candidate Chow is obvious. There’s the winnability, the name recognition, the track record, the compelling personal narrative and the impressive campaign organization tying it all together. But these same things can sometimes obscure her specific appeal, the combination of qualities I only encountered for the first time in that living room on Saturday night.

At her March 13 campaign launch at St. Simon-the-Apostle Church at Bloor and Sherbourne and at her March 16 rally at the Westin Prince Hotel at York Mills and Don Mills, there were times it seemed that several other people might have taken her place and received much the same response – which is not to suggest the crowds’ thunderous cheers expressed anything less than genuine enthusiasm (as opposed to, say, at the launch of Adam Giambrone’s short-lived 2010 campaign). The affection and hope for salvation were real.

But carefully constructed spectacles whose primary purpose is the creation of images that will look good on TV (whether the sound is playing or not) only serve to reinforce the least appealing aspects of any frontrunner campaign: the twin whiffs of entitlement and inevitability. In the very worst case, the candidate becomes indistinguishable from the apparatus.

“Now, before I begin,” she says at the start of her speech at Sunday’s rally, “let’s steal an idea from the Academy Awards. I want to take a picture of you.” And following the obligatory group selfie: “Now we’ll tweet it so you can see how amazing you all look. Or if you’re Rob Ford, you may see it an hour from now.”

The Ford line gets a hearty laugh despite making rather little sense. Even after she explains it by adding, “Hey, Rob, the clock sprang forward” – a reference to his daylight saving Twitter gaffe a week earlier – it has less in common with an actual joke than with a stilted quip crafted by speechwriters who must have thought it clever and topical at the time.

No matter. The tweeted selfie will make the TV news, and the words around it probably won’t.

Chow’s depiction of the Scarborough RT is accurate.

On this night, it feels even more like a wooden roller coaster than usual as she, a couple others from the salon and I ride it back downtown from Malvern. We wonder when the thing might finally get to be put out of its misery.

The TTC is otherwise remarkably tranquil for midnight the Saturday before St. Patrick’s Day, so I take the opportunity to pull out my audio device and ask Chow to speak on the record about some things. She’s tired, having been up since 6 am, and has had a glass of wine, but agrees.

She’s likely far more coherent than Rob Ford was that time he lost a key transit vote and proceeded to take a late-night ride across the city with a poor staffer and Sun columnist in tow.

I press Chow on the most perplexing element of her campaign thus far, her indifferent dismissal of a proposed downtown relief line. (In a scrum immediately following her launch, she was asked whether she was committed to such a project declining to give a direct answer, she said only that it “eventually needs to be built.”) Chow tells me that “of course it’s needed” and is “absolutely” a priority she’s been reluctant to promise anything because the costs are unclear, and criticizes the other candidates for getting ahead of themselves. (Read our full exchange on this.)

At Broadview station, a pair of young women board the train and can’t believe their luck. Identifying themselves as nurses, they tell Chow how thrilled they are that she’s running for mayor and how excited they are to work on her campaign. They even ask for an autograph and squeal afterwards as though they’ve met a celebrity hero.

It’s as hard to imagine John Tory eliciting this kind of reaction as it is to imagine Rob Ford taking an hour of policy questions from a roomful of strangers.

But the moment ends and Chow again becomes just another person taking the TTC on a Saturday night, from RT to subway to streetcar. She has to get up at 6 am to prepare for the rally.

And when, the next day, she enters the ballroom to roaring cheers and Calvin Harris’s Feel So Close, I have a hard time reconciling this superstar with the person I rode home with on the 510 the night before.

Maybe her strength is that she can be both of these things. Maybe her weakness is that one could overshadow the other. 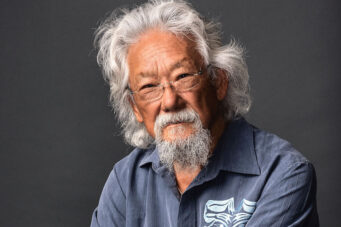