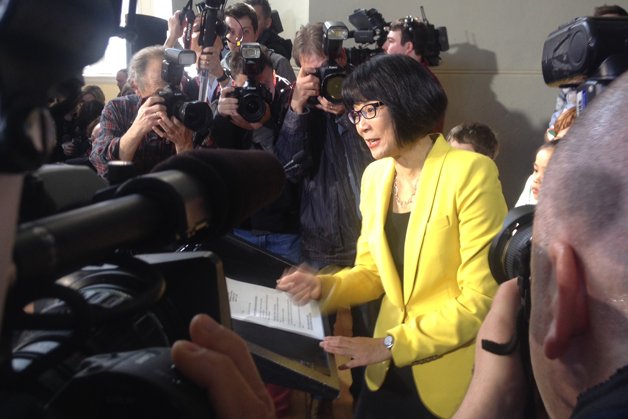 Olivia Chow kicked off her mayoral campaign in a packed downtown church on Thursday, promising to replace an incumbent who she said is “failing at his job.”

A day after she sent an aide to City Hall to register her for the election, the former NDP MP delivered a powerful speech at St. Simon-the-Apostle Church, a venue chosen because of its proximity to the St. Jamestown neighbourhood where she grew up after emigrating to Canada from Hong Kong.

Her journey from inner city high-rises to the corridors of power in Ottawa played a prominent role in her remarks, which hit several emotional chords with the supportive crowd but revealed no policy details.

Chow, who resigned as a representative for Trinity-Spadina on Wednesday in order to run for mayor, spoke about how her family’s immigrant experience shaped her political outlook, recalling that she longed to buy hockey skates because there was “nothing more Canadian,” but she couldn’t afford them. She said that although her mother was a trained teacher she had to take cleaning jobs, and her father struggled to find work.

While she has been accused by her opponents of supporting wasteful government spending, Chow emphasized how her background taught her fiscal responsibility.

“Growing up, I learned how to work hard and make every penny count, to save money for rainy days and to invest wisely,” she said, standing at a podium on a stage packed with media and supporters. “That’s a lesson I took with me into my political life as a school trustee, city councillor, and member of parliament. And it’s what I will do as your new mayor.”

Although she didn’t mention Rob Ford or any of his many scandals by name, her criticism of the sitting mayor drew one of the biggest reactions from the audience.

“The current mayor’s disappointing leadership has let us down, over and over again,” she declared, to raucous applause from the crowd. “The current mayor is failing at his job. And he is no role model for my granddaughters.”

After her speech she took questions from the media and offered a glimpse at her platform, which will focus on children and families, job creation, and transit. In a radio interview earlier in the day she had revealed that she opposed the $3.6-billion Scarborough subway extension and preferred an LRT line instead, but pressed by reporters she would not explicitly say whether she would cancel the underground project if elected.

Both the provincial and federal governments have already committed funding for the subway, and council agreed to contribute close to $1 billion to it last fall. Undoing those commitments in favour of light rail could be difficult.

Chow also would not commit to building the relief subway line that is widely seen as necessary to relieve Toronto’s worsening gridlock.

“The downtown relief line eventually must be built. The question is how do you fund it and what does it connect to,” she said. She promised to lay out a full transit platform in the near future.

Chow spoke against the controversial plan to allow jets at the island airport, saying it would have an adverse impact on the nearby waterfront community, but wouldn’t take a position on the proposal to demolish the eastern end of the Gardiner Expressway, stating only that she looked forward to debating it.

Mayor Ford dismissed Chow’s criticism of his leadership Thursday afternoon, telling reporters outside his office that his record speaks for itself.

“We’re a hundred times better than we were three years ago,” he said. “If people want to go back to the NDP tax-and-spend ways, she’s their candidate. A majority of people do not want that.”

The mayor rejected Chow’s stated promise to keep property tax increases in line with inflation, predicting she would raise them higher. “All she is a tax-and-spend socialist. Everyone knows it, call it for what it is.”

He criticized her for opposing the Scarborough subway, and falsely claimed that all of his opponents wanted to “kill the subways that people want.” In fact only one other contender, David Soknacki, has said he is against the Scarborough underground line.

The mayor also claimed that he was moving forward with building subways on Finch and Sheppard, even though council has approved light rail for those routes.

Soknacki, a centre-right candidate, said he wasn’t surprised that Chow’s campaign launch generated a lot of publicity and conceded he had some ground to make up if he hopes to nab the mayor’s chair.

“I never thought my candidacy was anything but an incredible challenge,” he said in an interview. “I’d be surprised if Olivia didn’t start that way.”

Soknacki said Chow’s support for the Scarborough LRT was “on the right track,” but he criticized her for not committing to the relief line as well.

“The relief line is a critical part of our infrastructure,” he said. “It’s not that we can plan for it in 20 years, we need to start building that much sooner rather than later.”

While acknowledging Chow and Ford have higher profiles, Soknacki said he was confident his campaign can make up ground in time for the October 27 vote by sticking to evidenced-based policy announcements.

Soknacki’s campaign has by far been the most policy-heavy in the early days of the race, and has already issued white papers on a host of issues, including transit, the land transfer tax, small business, and government transparency. He intends to unveil another major plank in his platform either on Friday or early next week.

Prominent conservative candidate John Tory also took aim at Chow’s transit stance on Thursday. Shortly after her speech, his spokesperson released a statement slamming her opposition to the Scarborough subway, a project that Tory supports. It argued that revisiting the transit question would only delay new lines getting built.

“Toronto residents have a clear choice,” said spokesperson Amanda Galbraith in the statement. “They can choose to reopen the debate and opt for Ms. Chow’s approach of more talk, dithering and fighting, or they can back a mayor who can get things done. John has been clear. He will get transit built in this city.”

Sometime on Thursday, Tory’s campaign set up a website advocating for the relief line. It was the second such page the candidate authorized in two days. On Wednesday, hours after Chow registered, his camp set up a site criticizing her for sending out taxpayer-funded promotional flyers to her Toronto constituents shortly before resigning as MP.

A video from her campaign published online Wednesday is available here.