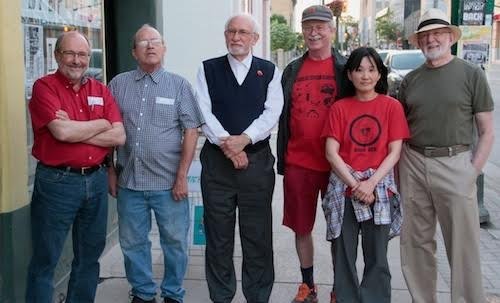 CHRIS COHEN with SUNSHINE AND THE BLUE MOON and THE SEAMS at the Silver Dollar, Sunday, June 5. Rating: NNN

The Silver Dollar puts together concert bills that aim to bring warm bodies into the room above all else. The logic goes: stack the opening slots with local bands who have a modest following, get them to bring their friends out, and by putting each band’s crowd together, you have a room that looks mostly full. It’s a time-tested method that works fairly well in Toronto, where social life can feel ridiculously compartmentalized by competing demands for time and attention. (Witness the forlorn pleas of “What are the set times? Can you please post the set times?” echoing across so many Facebook event pages.)

A lack of aesthetic coherence, however, can make a show feel like a bit of a rudderless affair for anyone who’s there for the whole thing. On Sunday night at the Dollar, the Seams’ gaze-inflected power pop was lively and energizing, propelled by sunny vocal harmonies and Simone TB’s brilliant drumming. But it felt incongruous with middle band Sunshine and the Blue Moon’s gloomy, shambolic psych jams, which carry heavy Brian Jonestown Massacre vibes. That’s a fine thing for any band to aspire to, but SATBM’s particular brand of being Elegantly Wasted made for weird energy on a night otherwise free of classic rock gestures.

Chris Cohen and his band were in the zone from the start of their set, running through most of excellent new album As If Apart, as well as some tracks from 2012’s also very excellent Overgrown Path. The crowd, previously scattered among friend-factions near the back of the room, congregated around the stage while the band performed with care and precision, almost flubbing the intro to standout track As If Apart but seeming all the more heroic in their last-minute recovery of it.

Without affect or pretense, the former Deerhoof/Ariel Pink/Cass McCombs member and his bandmates dug into the songs, virtuosically demonstrating how a band can sound intense without playing loud, and can shred without being showy. There are a million rock bands configured like Chris Cohen’s – same gear, same-looking dudes, same bag of references – so it’s remarkable how much his music stands out on the basis of songcraft and loving attention to dynamics and tone.

There’s no way anyone left unhappy after Cohen’s set, but a number of people might have left thinking it’s better not to show up too early at a Silver Dollar show. Anyone who’s spent time promoting concerts will tell you that it’s like trying to squeeze blood from a stone – you’ve got to put “coins in coffers” and “bums in seats” by any means necessary. There’s an undefeatable logic to this thinking, but it has the dreary side effect of a messy context for a show.

Is it unavoidable to have to make something less meaningful, or less fun, in order to make it more profitable? It’s hard not to look at the lineup of Cohen’s show tonight in Montreal, with Freelove Fenner and Sheer Agony, two very excellent complementary bands, and wonder: can we not have nice things a little more often here in Toronto also?