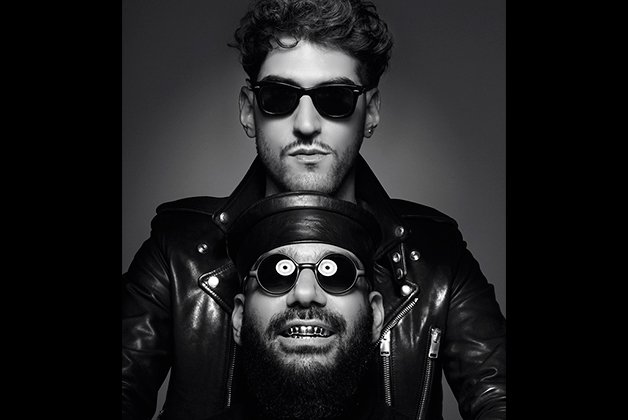 For their fourth album, Chromeo had a vision.

“The idea was to spend more time on it: on recording, writing, songcraft,” says the electro-funk duo’s lead singer, Dave 1, aka David Macklovitch.

“I had a bit of a chip on my shoulder when we started this record. I really, really wanted this band to improve, and I wanted to polish up our sound.”

Macklovitch and partner P-Thugg (aka Patrick Gemayel) – originally from Montreal, now based in New York – also had a bucket list: female background vocals (check), a song with a full orchestra (check), interludes between tracks (check), a break from the three-minute-song formula of their previous three albums (check, see Sexy Socialite).

The infectious result is White Women, named after Helmut Newton’s first book of photographs, published in 1976.

“[The title] gives us an opportunity to talk about our influences beyond just music… and it’s also a bit of a mindfuck. But it’s fun to talk about that, too,” he says.

The lyrics follow a simple boy-meets-girl, boy-lusts-for-girl template. But the messages they convey are often as loaded as the album title.

“We talk about aspects of relationships that no one else sings about – whether it’s Jealous or Over Your Shoulder, which is kind of an ego booster for insecure girls in the age of Tumblr and Instagram.”

On that latter song, he coos, “See, your problems of self-esteem could be self-fulfilling prophecy / so probably your best policy is to talk to me.” When I suggest that it might be offensive to paint women as insecure and image-obsessed, Macklovitch says, “For some girls who aren’t, good!

“I’d also like to meet a guy who’s not insecure,” he says. “I mean, show me.” (Hence Jealous, which taps into male feelings of inferiority.)

Still, it might all seem a little patronizing if Chromeo’s music weren’t so darn earnest. Embracing retro without a touch of irony, the duo are a modern electro version of wholesome Hall & Oates, albeit with a hefty dose of Prince’s lusty funk and saviour complex.

Although White Women is certainly more songwriterly, Chromeo’s sound is relatively unchanged since their 2004 debut. But the musical landscape has shifted: Daft Punk’s funky disco-danceable Random Access Memories, for example, was one of 2013’s biggest commercial and critical hits.

“The success of [Get Lucky] opens doors for anybody who makes this kind of music. It creates a climate where people are no longer frowning on disco.”

On this subject, Macklovitch is passionate and refreshingly frank.

“When we came out, we wore Cameo and Zapp and Rick James on our sleeves, and people thought we must have been joking because there was no way anyone in their right mind could use those people as an influence. And that’s just institutionalized musical racism by music critics who always think Joy Division is cooler than, you know, Cameo.”

Jealous (I Ain’t With It) is in major rotation and could be their biggest hit. With Coachella and SXSW already under their belts, the band is playing pretty much every world festival that matters this summer – Lollapalooza, Roskilde, Osheaga – before heading out on a fall tour. In short, White Women will be heard a lot.