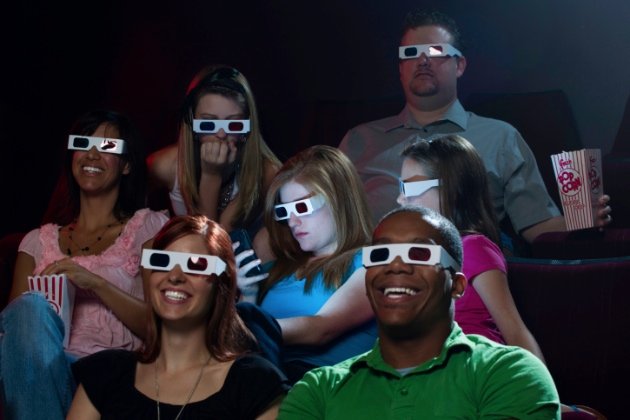 Texting in a theatre? You're worse than Hitler.

Last week during TIFF, FirstShowing.net blogger Alex Billington made headlines – the kind of headlines that are their own punch line, the kind Leno would read out loud as part of a desk bit – for calling 9-1-1 during a Press & Industry screening of the Ti West thriller The Sacrament.

In certain quarters, etiquette regarding checking your phone in movie theatres is debated with the intensity that the real world might regard for, say, the validity of an American strike on Syria. This was like the high-satire parody version of all those discussions.

As Todd Brown noted at the Huffington Post in the fallout of Billington’s misunderstanding of what constitutes a 9-1-1-level emergency, industry types at these TIFF screenings need to use their phones. This is where new movies are purchased for distribution. This is often the first place where the films that build the culture of cinema enter the world. And the cost of a wider public being able to see these films may be a rectangle of fuzzy light offending your precious eyes.

Following a torrent of increasingly irate tweets about TIFF’s “disregard for the integrity of cinema” and, ludicrously, his attempts to mount “a major campaign to take action” (this from an adult man who deputizes hard-pressed TIFF volunteers to shush people for him), Billington has posted his own, billion-word, response. And is it ever a read: a full-on frothing expose of a treacherous conspiracy that goes all the way to the top of TIFF.

Deluded of his own martyrdom, Billington believes that we’re on the cusp of a total sea change, perched on the edge of a world where a film festival drafts a formal policy to restrict cell phone use by Hollywood industry professionals. This is his calling, his quest, the saint: like Christ cleansing the temple.

I love TIFF, I’ve been attending for seven years and hope to return for many more. But the fest has an embarrassing problem with rampant cell phone use during Press & Industry screenings. And I am the first person in the festival’s history to stand up to it, say something about it, and make a ruckus big enough to actually draw the attention of the festival’s decision-makers. It’s time for them to make a change. It’s time for this repulsive problem to be brought to light and for the festival to once again set a precedent for preserving the profoundly affecting experience of cinema.

Billington’s demands are simple: “a pristine experience at all [italics sic] festival screenings.” Beyond the fact that insisting on nothing short of a “pristine experience” makes you sound like you were breast-fed with San Pellegrino, the expectation is ludicrous, indicative of a whole hysterical culture that believes that the enchantment of film going is being ruined by loosely holstered iPhones. Later, he talks about the need for industry folks to “respect the film” as if the film itself has feelings, as if it can see and be annoyed by someone using a phone in front of it. (It should be stressed that he was at a screening of a tacky found footage horror movie, not some super-engrossing high masterpiece of the medium.)

Yes: people using their cellphones during movies can be annoying. Even worse is the loose-knit vigilant posse hollering “TURN OFF YOUR CELLPHONE!” during screenings, shaming the texters until they slump down in their seats. Worse are the types like Billington so frazzled at a few digital torches lighting up during movies that you can imagine steam shooting out of their ears.

If someone is annoying you – with their cellphone, with anything – a reasoned response may be to tell them they’re being annoying, to ask them to stop. A less reasoned response would be to defer the friction of personal conflict to a TIFF volunteer who, if TIFF’s volunteer appreciation pre-film bumpers are any indication, is probably a bouncing adolescent girl with a side-ponytail or someone’s sweet ol’ grandma.

An idiotic response would be calling an emergency response line, the kind of thing that’s used to deal with stuff like murders and house-fires and people falling down in the shower. A similarly idiotic response is angrily tweeting about it as if your tweets are going to come to life and swirl together in a loose cartoon glove and pluck the phone from someone or toss the offending industry monster out of the cinema, like Uncle Phil bouncing Jazz on Fresh Prince.

The anti-texting, bijou-going Emily Post crowd usually hinge their correctness on some variant on the Locke-Rousseau social contract, i.e. the idea that our personal rights are derived from respecting those of others, that the benefit of all individuals in a given political order (or AVX 3-D movieplex) comes at the restriction of certain individual freedoms (like the freedom to use a BlackBerry in the dark). What Billington and others seem to advocate for is a Hobbesian policy Leviathan: an effectively unenforceable rule dictating that “[i]f someone is using a device that is distracting/annoying other audience members, TIFF staff should confront them, ask them to move and eventually kick them out if they refuse to cooperate.”

Besides the nitty-gritty of such policy – where would everyone sign to take part in this contract? What if I don’t consent to it? Do you actually expect unpaid volunteers to turf industry executives from press and industry screenings? Ha! – the idea says a lot about how many people entrenched in the movie theatre phone use debate regard the issue. Instead of engaging in a brief bit of personal conflict to ask someone to stop being obnoxious, which seems like a healthy part of any social contract, they’d rather absolve that problem into the thin morass of diffused bitching and suggest imposing policy designed to spook you into submission.

The tug-of-war here is between the distraction of a lit up cell phone screen and the competing distraction of someone shouting “TURN OFF YOUR STUPID PHONE!” Both are distracting, both effectively break the spell of cinema-as-sorceress. But only one is seen as vital and vigilant in the turf war against cell phone use. I never, ever thought I’d be paraphrasing William Buckley (ever) but, well, this is totally a “cancel your own goddamn subscription” kind of scenario. If you can’t resolve such a simple conflict yourself, you should be ready to face the reality that it will go unresolved.

Though Billington, in all his shrill self-righteousness, believes that the film industry is “disgusting” and exists in opposition to the press (who he conceives as a something like a vanguard in place to preserve the experience of film-going itself, as opposed to relating qualities and values of a given film to a reader), the Ps and the Is are yoked together during a film festival. Their mutual job is to help shape the annual film-going slate for markets, to curate film culture. The press does this by pre-evaluating the given offerings, to determine which may be fit for wider consumption. The industry does by creating the context for this wider consumption, by seeing if films are (in their estimation) worth buying and distributing. One of these seems more essential.

Moreover: there should be no expectation that a Press & Industry screening constitute a “pristine experience.” A cinema full of critics scrawling in notepads, half-following what’s going on on-screen is no real idyll. This is because the press, like the industry, is supposed to be working, not basking in the radiant flicker of the moving image itself. Seeing a film, for free, at a film festival, ultimately remains a privilege of the media. Writers like Billington, padding out the Internet with treatise after sky-is-falling treatise about the withering of the theatrical experience, need to refill their chill pill subscription stat.

Cinema will survive despite the iPhone. People will still be able to enjoy films in something closer to a “pristine” environment during non-Press & Industry screenings, which is where most film-goers see movies anyway.

If fuming bloggers like Billington have to suffer through the cinema-snuffing offenders in the disgusting film industry in order to ensure that films reach this public, well, that’s the cost of the social contract. As Rousseau puts it, “there is no man so worthless that he cannot be made good for something.”

UPDATE (09/17/2013, 4:32 PM): It has come to my attention that Alex Billington once live-tweeted a screening of Crank 2 from the cinema. And his jokes weren’t even funny! What a clown.