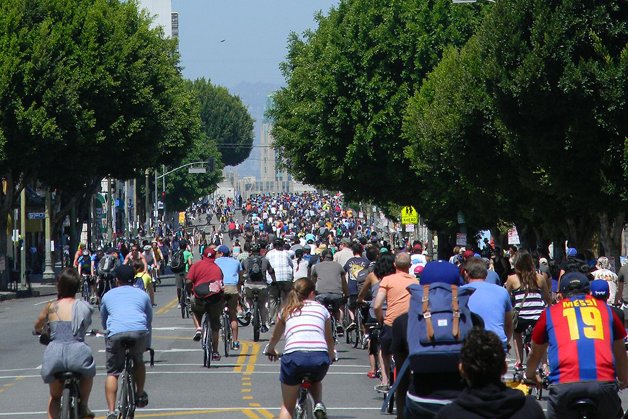 A ciclovia event in Los Angeles in 2013.

An ambitious plan to close of long stretches of Bloor and Yonge for a new street festival is going ahead, but the initiative could end up being scaled back significantly.

A coalition of groups called Open Streets TO wants to shut down at least 10 km of roadways on four Sunday mornings this summer for walking, cycling, and other free recreational activities. The idea is to create “paved parks where people of all ages, abilities, and social, economic, and ethnic backgrounds can come out and improve their health,” according to the group’s website.

The open street concept, also called a “ciclovia” – a Spanish term that means cycle way – was pioneered in Medellin, Columbia and has since spread to other cities like Guadalajara, Winnipeg and New York.

The Economic Development Committee debated the proposal Wednesday, and amid concerns about the impact of closing Toronto’s major downtown roadways, councillors voted to refer it to the city manager for further consultation. Councillor Michael Thompson, who moved the referral, says he expects the manager to come back with a proposal for a pilot project that will close fewer streets and last only one day this year.

“This is not an attempt to kill this,” said Thompson, who is chair of the committee. “It’s really an attempt to ensure that it succeeds, but it’s done in a proper way.”

The councillor said he hoped staff could “work out the bugs” and if the pilot succeeds, it could be expanded in future years.

Councillor Kristyn Wong-Tam, who has been spearheading the Open Streets effort, is still hopeful that the larger proposal will go ahead. The group’s proposal suggests four separate days and “we will probably continue to negotiate,” she said. “It’s about compromise, it’s about making sure that it works for everyone.”

Open Street TO’s initial proposal would be to close Bloor all the way from High Park to Greenwood, and create a downtown loop from Yonge from Bloor to Queen, Queen from Yonge to Church, and Church from Queen to Bloor. The streets would be closed to cars from 8 a.m. to 1 p.m. on July 27 and August 3, 17, and 31, but traffic would be allowed to cross the route at intersections.

The committee heard from a number of deputants who urged the committee to accept the open streets concept that has been a big success in other cities.

“We’re not sending a rocket to Mars,” said Gil Peñalosa, chair of 8-80 Cities, one of the members of the Open Streets TO working group. “Keep in mind, we’re just opening a few streets to people.”

Renowned architect and urban planner Ken Greenberg had pointed words for the committee.

In a staff report, several city divisions expressed doubts about the plan flagging concerns about accessing locations along the festival route for Emergency Medical Services and Toronto Fire.

A major sticking point is the potential impact on the TTC. Buses normally run on Yonge on Sunday mornings until subway service resumes at 9 a.m. That service would be unavailable if Yonge were closed, and opening the subway an hour early would cost $45,000 each day of the festival.

The Yonge line is also scheduled for shutdown for critical signal maintenance on July 27, one of the proposed festival dates. Without replacement buses, that would leave 26,000 people without convenient access to public transit.

The police had the harshest response to the plan saying in a report it would be “logistically, operationally and functionally impossible to achieve” because the number of officers required to staff an event so large would “far exceed capacity.” Even if there were enough officers, the force said it would cost at least $210,000 just to close the roads, in addition to wages for police security and crowd control.

Whether or not an open streets festival actually takes place this summer is now in the hands of city manager Joe Pennachetti, who will consult with city departments to outline an acceptable scope for the project. After that Open Streets TO will make a formal application to the city. The issue will not come back for a council vote. Instead the final decision will be up to Transportation Services, which handles road closure permits.

Councillors on the committee are hopeful solutions to city department’s concerns will be found in time for a version of the festival to go ahead this summer.

“I think it’s time that we start looking forward to some bold moves in this city,” said Councillor Ana Bailão. “We definitely would like to see it happen this year. I actually started promoting it already so I’m very optimistic that it’s going to happen.”