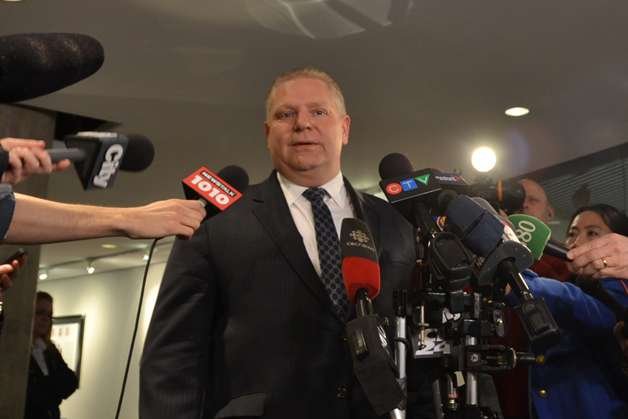 Leave it to the Fords to reduce rehab to a self-serving game of hide-and-seek.

That’s what this cynical, infantile pair habitually do: calculate the public relations dividend they might derive from the latest obnoxious turn in their lives.

Hence Doug Ford’s braying last week – with signature faux solemnity and outrage – for everyone to “pray” for Rob’s recovery, and for the media to “respect” his family’s privacy after the latest barrage of news about the mayor’s crack addiction.

Doug played the role of the concerned, loyal big brother who was relieved and thankful that baby brother Rob had finally recognized he needed “professional help” to tame his “problems” with booze. He obliged the media’s thirst for a defining, emotionally charged image by getting slightly choked up.

This choreographed pity plea had the intended effect of changing the media narrative from “Mayor goes on a ‘fag’ and ‘dago’ rant while smoking what appears to be crack in older sister’s basement” to “Older brother bids tearful adieu to troubled kid brother who’s finally seen the light.’

It worked, incredibly, with the co-operation and tacit approval of the usual media suspects – and, lately, the CBC.

Much of the media was indeed “respectful,” and refrained from asking Doug uncomfortable questions about Rob’s aforementioned racist and misogynistic comments and about jamming Karen Stintz or what he was smoking in his sibling’s basement.

Once again for the Fords, it was PR mission accomplished.

Talk radio callers, scribes and city councillors implored the media to show restraint and heed Doug’s call, since Rob was facing a stark choice: get better or die.

This cockeyed construct, advanced by faithful Ford stenographer Joe Warmington of the Toronto Sun, was designed to paint Rob as a damaged but sympathetic figure and cast uncooperative media as jackals gleefully picking at the mayor’s political and personal carcass.

I say “Bully for the jackals.”

It’s not remotely unethical for journalists to challenge these pathological liars.

By their words and deeds, the Fords, in their public and private lives, have proven themselves untrustworthy.

When a couple of insensitive buzzards working at the Globe and Mail discovered that Rob had taken a private plane to Chicago (and turned back ), the “hurting” but still conniving Fords changed the channel.

Again they turned to Warmington to reassure Torontonians that – not to worry – Rob was happy and relishing his time in the witness protection rehab program… somewhere.

Indeed, in addition to Warmington, Rob reportedly found time to talk by phone to all sorts of people, including other councillors and constituents, to chortle that he was having an “amazing” time allegedly getting sober.

That’s what happens when you pull out the bullhorn to broadcast that you’re doing okay in rehab while claiming like Greta Garbo that you want to be left alone. Doug’s tearful entreaty to respect his family’s privacy was consigned to the memory hole while he began obliquely campaigning to take over his “sick” brother’s job – with a knowing smile. Welcome to the pack of jackals, Doug.

And rather than act responsibly (I know, it’s impossible), Doug took obvious pleasure in keeping the “where’s Waldo” game alive by promising to provide details to prove that Rob was, in fact, in rehab.

That the Fords are treating the serious matter of drug and alcohol rehabilitation involving the mayor of the largest city in Canada like a version of peek-a-boo extinguishes their so-called right to privacy.

But this didn’t prevent CBC TV from brokering and trumpeting an ephemeral “exclusive” about Rob’s supposed whereabouts in rehab, with the help of the elusive mayor’s suddenly media-friendly campaign manager brother.

The CBC joined Doug in playing a pair of tiny fiddles, claiming it was keeping the location hush-hush to shield Rob and other families, presumably from being hounded by much less considerate media jackals.

What a convenient bit of exculpatory nonsense.

If the CBC knows where the mayor is, it has an obligation and duty to inform its audience. Otherwise, it has effectively become part of the Fords’ public relations apparatus. It’s the Fords who bear responsibility for converting a stint in rehab into a circus – not the media.

UPDATED MAY 18, 9:10 AM: On Friday, May 16, the CBC’s director of journalistic standards and practices David Studer engaged in a bit of triumphalism in a blog about “finding” the much-ballyhooed story.

The CBC “confirmed” where Rob allegedly is in rehab by calling Doug and effectively saying something like: Hey Dougie, tell us where your brother is and cross-our-hearts-and-hope-to-die, we won’t tell anyone. The CBC is trying to give its deal-making the imprimatur of public interest journalism

The kicker is that Doug solemnly told the CBC that Rob was being monitored 24/7. Only the mayor appeared near the family cottage in Bracebridge Friday afternoon within hours of the CBC post taking pictures with locals. Odd for someone who is supposedly being monitored around the clock, wouldn’t you say?