City not prepared for climate change 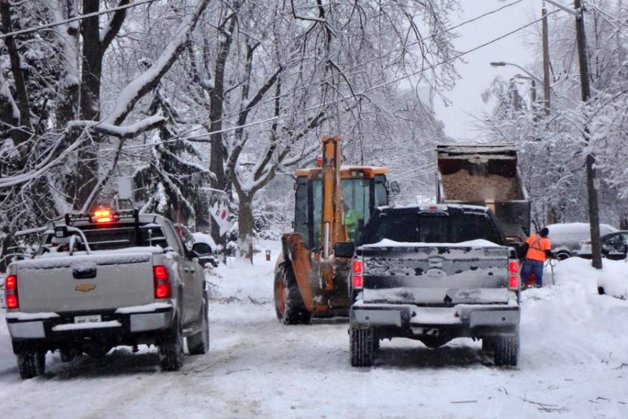 Toronto’s top bureaucrat is warning that the city is unprepared to handle the effects of climate change, and badly needs help from higher levels of government to cope with increasingly frequent bouts of extreme weather.

At a special meeting Friday to discuss the pre-Christmas ice storm that left one million people without power, City Manager Joe Pennachetti predicted it won’t be long until Canada’s biggest city is walloped by another major storm.

“We all know that these ‘hundred year storms’ are happening every two years and at the end of the day they’re not going away. It’s probably going to get worse,” he said.

The meeting adjourned at 3:30 p.m. Friday but when it resumes on Monday councillors are expected to vote on a motion asking the provincial and federal government to pick up some of the cost of both last month’s ice storm as well as the July downpour that caused flash floods across the city.

The summer deluge cost $65 million and the winter blast $106 million, for a total of $171 million. City staff are recommending council ask the other levels of government to split the bill evenly three ways, at $57 million each.

Pennachetti stressed that all levels of government not only need to address the cost of the 2013 storms, but also start preparing for fierce weather to visit the region on a regular basis. A recommendation before council calls on Ottawa and Queen’s Park to devise programs to address the long-term affects of climate change on cities.

“We have to work together as partners on solutions for extreme weather. It’s time now to sit down and do that,” he told reporters. “We’ve been highlighting in reports that we know that this is becoming an issue, and we’re finally there. We’re at the point.”

Securing relief from the province and the feds is no sure thing.

Last year the Ontario government rebuffed the city’s first request for help with the cost of the summer rainstorm, and staff aren’t optimistic that the ice storm will qualify Toronto for the Ontario Disaster Relief Assistance Program because it’s generally reserved for small municipalities overwhelmed by major weather events.

But Pennachetti believes the combined damage of the two storms across the GTA will convince the provincial and federal governments to come up with the cash. Mayors from the region will meet next Friday to coordinate their funding requests.

Even if Toronto succeeds in getting disaster aid, it could struggle to pay its own $57-million share. Some of the money could be taken from a $30-million winter weather reserve fund, but depleting the account would leave the city vulnerable to another heavy storm this year.

Councillor Mike Layton argues that the city might be in a better position if it had been quicker to act on protecting itself from climate change.

A major 2012 study warned that infrastructure will need to withstand an increasingly wet and volatile climate in coming decades. But even before that, a 2008 city report titled Ahead of the Storm laid out 29 recommendations to shore up Toronto’s defences, including creating an inventory of susceptible infrastructure, incorporating climate change preparedness in all city divisions’ planning, and devising strategies to help vulnerable populations cope with extreme weather.

The goal was to implement the recommendations by 2011, but Layton says few of them have been put in place.

“It sounds like we may have started some of them but didn’t follow through on the implementation,” Layton says. “We know that more frequent storms like this are coming. Were we prepared enough? I’m not sure that we were.”

Deputy Mayor Norm Kelly, who was made chair of the executive committee when Mayor Rob Ford was stripped of his powers in November, says it’s time to take another look at the city’s previous reports on climate change.

“I’ll make sure that we take them off the shelf, and smack the dust off them, and get to work,” he says.

Kelly plans to follow a staff recommendation to have the executive review the ice storm response and report back in the summer on how to make the city more resilient to major storms.

But the deputy mayor may not be the ideal politician to lead the charge he was roundly criticized last year for suggesting that global warming would make life more comfortable for Torontonians.