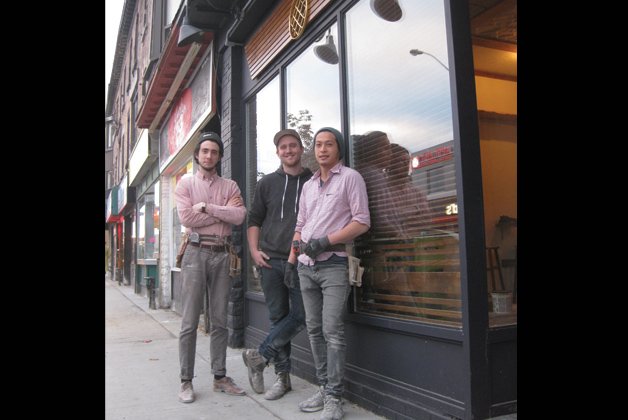 Good things come in threes. After three years of working together at Salt on Ossington, David Huynh, Nick Kennedy and Cole Stanford – who have been in the industry for 13, eight and seven years respectively – decided it was time to branch out on their own.

Fittingly, it only took them three months to settle on a space – a onetime hookah bar, grocery store and fish market near Bloor and Ossington, in a building constructed in 1912.

They arrived at the concept – a fun, unpretentious bar with great cocktails and a spotlight on service – and the name Civil Liberties. The sign, erected a few weeks ago, is a golden pineapple, the international symbol of hospitality.

The reality of any small business is finite funds. The three partners have done almost all of the demolition, drywall and framing themselves.

Regulars from their days at Salt have helped, too – inviting the proprietors over for dinner, hauling grimy buckets of clay out of the basement, dropping off vintage glassware and plumbing the entire building for next to nothing.

Working an average of 12- to 14-hour days (Thanksgiving was their first day off in five months), the trio has dealt with many challenges – deciphering the building code, mishaps with that fickle substance known as epoxy and getting kicked out of the dump for accidentally releasing a giant cloud of plaster dust.

It will all be worth it once Civil Liberties opens its doors – hopefully next month.

What drove you guys to open up your own spot?

NK This is an opportunity to do exactly what we want.

Tell me about the concept.

NK The word we often go back to is a fun – and modern – bar. We probably won’t do much table service because we want people to engage with us but also with one another.

Another thing we talked about is kindness over coldness. You’re not going to get judged over what you want to drink and how you’re going to drink it.

How will you feel when you open?

CS Usually, when you start to see the end of the road you think, “Oh shit! I actually own a business.” I don’t think any of us feel that way. We just want to get back to doing what we do.