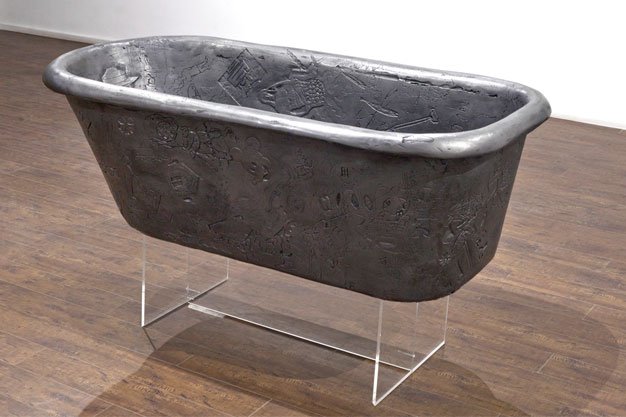 The current group show at Cooper Cole is a class reunion of sorts. New York City-based Ontarians Ryan Foerster, Lukas Geronimas and Shawn Kuruneru have returned to collaborate with Toronto’s Jesse Harris. Starting with the initial premise that every work would be 6 inches apart, they gradually refined their spatial dynamics, carving out niches for their work throughout the space.

Geronimas uses objects in a way that underscores their ambivalence. At the front of the gallery, his tub, seemingly cast in pewter, is carved and scratched over with scrawls and figures that bring to mind the scarred desks and bathroom stalls of grubby city life, inviting us to bathe in their imagery.

Harris appropriates the vintage language of advertising and signage. Recontextualized in acid greens and yellows, his pieces practically seethe with gleeful menace. He shares the wall with photographer Foerster, who overlays decayed photographic images with layers of vinyl in primary colours. Both feel like urban surfaces organically accrued and rubbed raw over time.

Once given to dense and surreally noirish pen drawings, Kuruneru here is iconic and spare. His three canvases form a triptych on the west wall: the central one bears a near pictogram of a Chinese man on a boat with a crane, flanked by two splattered with thin washes of black paint in the manner of a Chinese brush painting.

By organically filling the space, the four show a common preoccupation: a fascination with surfaces and objects subjected to the natural processes of time. The image, it seems, is less a concrete thing to be observed than an accretion of several shifting layers, caught at a particular point in flux.