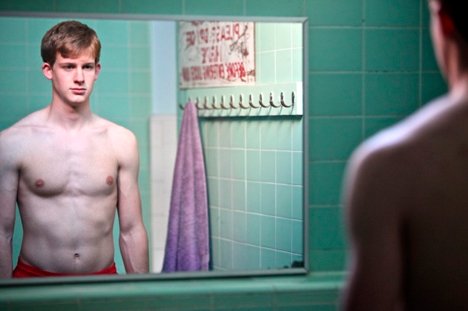 A scene from Clear Blue

As a preview to this year’s SXSW, NOW talks to a few Torontonians making the trip to Austin.

Here is an interview with 26-year-old S. Brent Martin, the producer of the short film Clear Blue.

Clear Blue is a story about an unconventional love with a fantasy twist.

Your films have been screened across North America and in Hong Kong. How do you think SXSW is going to compare?

The films I’ve made have been to more festivals than I’ ve been able to go to. SXSW is one of those festivals that you just make time for.

How did you get the spot at SXSW?

They were slow at getting back to us. I sent them an email, gave them a phone call. That same day they called. We were having a bit of dry spell up until that point. It was a huge boost.

Do you have an outfit planned for the screening?

I hear Austin is pretty casual. I probably won’ t show up in a Tuxedo.

You are going to Austin with (Clear Blue cinematographer) Mattias, (editor) Rachel and (writer / director) Lindsay. What’s that road trip going to be like?

Everyone else is in LA right now. I’ll be making the trip alone. I’m flying. I imagine Lindsay and I are going to meet up and go straight to the bar.

What do you hope Clear Blue will achieve in Austin?

It’d be great to meet some short format distributors. Our main goal is just to get it out there, and to experience the film with an audience.

Who will be your biggest rival at SXSW?

I’ve never once thought of it that way. I look at them as potential collaborators and fellow filmmakers. The biggest prize is getting into the festival and having the opportunity to meet all the other filmmakers that are involved.

Do you have a schedule for SXSW?

I’ m starting to think a schedule is a good idea. It seems like there are 100 things going on at once. Some require some planning and RSVPing. That’ s what I’ll be doing over the next couple days.

What shows or events are you most excited about?

There is an excellent feature film called Beginners with Christopher Plummer and Ewan McGregor directed by Mike Mills. I saw it at TIFF and it blew me away. I’m going to go see it again.

What will your SXSW drink of choice be?

I’m into the Tom Collins these days. I feel like a 70-year-old man, but it just feels so good when it hits the lips.