The director of the CBC's Book Of Negroes miniseries talks about conveying "the muck and the puke and the shit" of the slave trade. 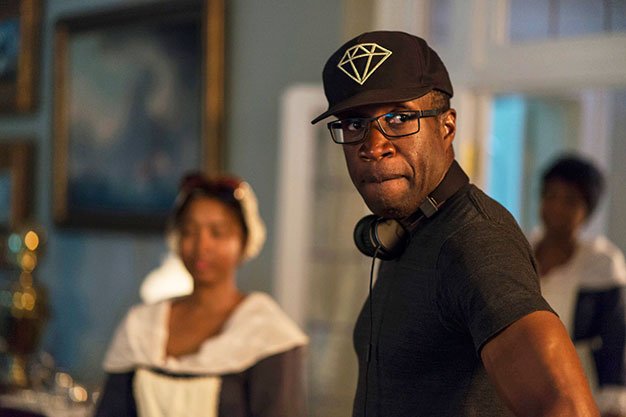 Lawrence Hill’s award-winning novel The Book Of Negroes is perfect fodder for miniseries treatment, covering over four decades in the life of Aminata, a midwife, translator and slave, and unfolding in four cities.

The CBC took the bait, producing a six-part TV extravaganza helmed by Clement Virgo. It premieres at 9 pm Wednesday (January 7) and continues every Wednesday at 9 pm to February 11.

We talked with Virgo about the challenges and pleasures of taking on Hill’s sweeping saga.

Did Lawrence Hill come to you or did you go to him for this project?

I went to Larry. It started with a conversation with Molly Johnson at This Ain’t the Rosedale Library. She encouraged me to buy the book and was so passionate about it. I read it, and he listened to my pitch. I told him it was like The Wizard Of Oz: Aminata’s taken from her home and all she wants is to get back there.

Does the success of 12 Years A Slave help or hinder a project like this?

We had Roots in 1977 and didn’t get a definitive film about slavery until 2013, so it made it easier to make a miniseries.

This story’s different. It’s from a woman’s perspective, and the slavery element is only a small part of it. When we think of slavery stories, we think of the plantation. But what I found interesting was the American Revolutionary stuff that I didn’t know about, the emigration of blacks from New York to Nova Scotia and this great woman caught up in this history with all the chaos going on around her.

I’m not used to thinking of the British as good guys, but they seem to have that role here.

The American Civil War occupies a lot of space in our minds when it comes to slavery, but the American Revolutionary War, which was the birth of the nation, created a crisis for blacks. “What do we do? The British want to help us.” You could be anything – blacksmiths, prostitutes – and they promised you freedom. We think about Washington and John Adams and the Declaration of Independence, but you never got the sense that these guys owned slaves and how that put blacks in a predicament.

I found the material in the book about the ocean-crossing the most harrowing.

And it was some of the hardest stuff to shoot. We created a set in the bowels of the ship. We wanted to convey the muck and the puke and the shit on the ground and people screaming and hungry and confused about what was going on. You’ve spent your whole life inland and you’re marched overland and see the ocean for the first time and are forced onto a ship. It’s the equivalent of being in outer space.

Hill’s creation of Jewish slave owner Solomon Lindo constitutes the first time I, a Jewish person, was made aware that Jews owned slaves. How did you approach this material and the sensitivities of your audience?

What’s interesting about the slave trade is that everybody was involved. What I love about The Pianist is that there are good Germans and bad Germans, good Jewish people and bad Jewish people who sell out their friends. I used Polanski as a model. Within any religion, culture or race, there’s going to be a wide range of points of view. Aminata says in the book that Mrs. Lindo is the only white person she can trust. I wanted to make sure Solomon didn’t come across solely as a racist.

How did you find your star, Aunjanue Ellis?

I wanted someone we could look at for six hours who had the acting chops to play 20 to 60 years old. Aunjanue was in The Help opposite Viola Davis and Octavia Spencer. Davis didn’t come out of nowhere over the past three years. She’d been working for 15 years before she made Doubt. Aunjanue’s the same way. She’s a dark-skinned actress who’s been doing great work for 15 years. When we met and talked, I knew she was the one. She completely recognized what the book was and then worked her ass off.

What about some of the more famous actors?

I had a list of great older actors, and Louis [Gossett Jr., who plays Nova Scotia preacher Daddy Moses] was seminal for me. He was in Roots, and it was important to me to connect the two projects. For Cuba Gooding Jr.’s role [as New York “fixer” Sam], I wanted someone with charm, acting chops and charisma to play a worldly guy whom Aminata would be interested in.

I first saw Jane [Alexander, who plays Aminata’s employer in Nova Scotia] in The Great White Hope. She lives in Nova Scotia, and I knew we wanted to shoot out there. She’s one of the top five actors I’ve ever worked with. When she came on set that first day and went through her lines, all the other actors were like, “Whoa, shit, we gotta raise our game.”

What about the title? The original publisher, W.W. Norton, changed it to Someone Knows My Name to avoid the word “negroes.” Were there any issues there in terms of American distribution?

The original U.S. publisher is reissuing the novel as The Book Of Negroes. When the BET network has the balls to show a miniseries called The Book Of Negroes, that gives it legitimacy. The word “negro” conjures up images because it’s connected to that other n-word. But we still use the word. There’s the United Negro College fund, a great org that gives scholarships to black students. Once people see the episode about where the title comes from [a book that was used as a record of black slaves leaving America for Nova Scotia], I think we’ll be okay.