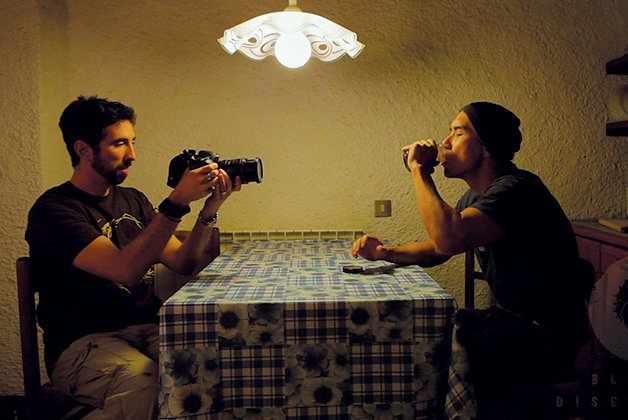 In Afflicted, their feature film debut, Canadian filmmakers Clif Prowse and Derek Lee manage to reinvigorate one of the most tired modern horror conventions: the found-footage film.

The film follows BFFs Prowse and Lee (playing versions of themselves) on a globe-trotting adventure that they film on camcorders and GoPros for friends at home. The trip hits a snag when Derek begins acting, well, odd.

Lee’s seated beside Prowse in a hotel hospitality suite during last year’s TIFF, where the film premiered in the Midnight Madness program.

“We had made about four shorts before,” he says. “They were all within the action or action-horror mode. But Afflicted was a huge divergence for us, not because of the genre, but because of the style of the movie.”

Though you can trace the genre back to stuff like Cannibal Holocaust, the contemporary progenitor of the found-footage boom is The Blair Witch Project, which (still) successfully milks scares with its ultra-lo-fi aesthetic. Unlike Blair Witch, Afflicted is loaded with high-tech effects. They’re just put across with an intentional sloppiness. According to Lee and Prowse, it’s hard to look so slapdash.

“We’d naively gone into it thinking we could just throw the camera up and that’s that – it’d take care of itself,” says Lee. “But it’s super-technical to make everything feel haphazard, like something crazy happens and you just happen to catch it on camera. Everything’s intentionally mis-framed the lighting’s not perfect.”

For Prowse, the found-footage style was essential to get the audience to buy into Afflicted’s fiction – and its terror.

“One of the things that makes a documentary-style movie effective is the quality of ‘Could this be real?'” he says. “If you can get the audience thinking of the characters as real people and not just actors on a screen, they’re way more invested. The artifice of filmmaking – if it looks too good, if it’s too perfect – can ruin that.”

The film shifts seamlessly from bromantic travelogue to tourist-in-peril thriller to supernatural horror (including a mid-film twist the filmmakers carefully tease but never give away), and its technical accomplishments dovetail nicely with its makers’ knack for messing with audience expectations.

“We’re always toying with when Derek realizes what he is and when the audience finds out. We wanted those things to meet at the same place. We hint at it, but the audience is never so far ahead of the characters that it’s frustrating.”