The volunteer-run Clothing Drive is hoping to raise $10,000 to secure a new space to store 900 bins of donated clothing 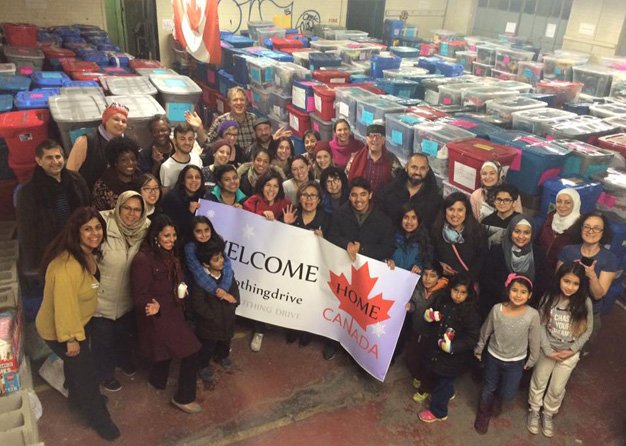 Clothing Drive volunteers stand next to 900 boxes of donated clothing, which has been packed up until the group can find a new space.

A group of Toronto volunteers is on the lookout for a space large enough to hold 900 boxes of clothing. They’re also trying to raise $10,000 in order to pay the rent. On December 1, around 80 volunteers with the Clothing Drive, a fundraising initiative to provide Syrian refugees with second-hand clothing, gathered at Clay & Paper Theatre to pack up clothing. Boxes will be driven to a warehouse in Brampton until a new space is found.

“We’ve gotten a generous trucking company, who doesn’t want to be named, to donate trucks and warehouse space,” says Julie Mahfouz, project director for the Clothing Drive. “They’re going to wait for us to tell them when we’ve got our space and then they’ll bring them right back.”

The clothing fundraiser was launched just two weeks ago by Laura-Jean Bernhardson, who owns Queen West shop Fresh Collective. Bernhardson is part of another community group, Room for More, sponsoring a family of six refugees in Toronto. She thought she’d help collect some winter clothing for the family before their arrival, and wrote a message to friends on Facebook.

“It just opened the floodgates,” she says of her post, which was shared hundreds of times. Within days, Bernhardson, with the help of volunteers, like Mahfouz, launched the Clothing Drive Facebook group, and connected with thousands of volunteers across the GTA.

Clay & Paper Theatre donated their space so that volunteers could store and sort all the clothing, but the Fort York-based puppet theatre, has leased out their space in December. Initial efforts to secure a new location, which Mahfouz says needs to be around 2,500 square feet, hasn’t been easy.

“We’ve had a few leads but unfortunately, they’re not going to work for the kind of people who are coming,” Mahfouz says. “Our volunteers are very important to us and we want to make sure they can get to our space, so being central is very important. Something on the transit line is critical.”

Over the weekend, the Clothing Drive launched an online crowdfunding campaign. So far, they’ve raised $6,000 of their $10,000 goal. The funds will go directly towards securing a rental space plus hydro, utilities and insurance. Once operational, Mahfouz says the Clothing Drive will be set up as a “free Value Village.”

“The ideal would be for people to come to us, and they can select what they’d like, try clothes on and make sure it fits,” she says, “There’s a level of dignity to that process as well.”

Bernhardson hopes to secure a new space within the next few days. At the moment, community volunteers across the GTA have been asked to keep all donations at their homes. Once the Clothing Drive centre is open, people will be able to drop off bags of used clothing, which will be sorted by volunteers.

“We intend to continue being a volunteer organization,” Bernhardson assures. “Our mission right now is addressing short-term needs – about three months – but it changes every day. We didn’t plan any of this.”