Band's noisy, hook-fuelled record is their best to date 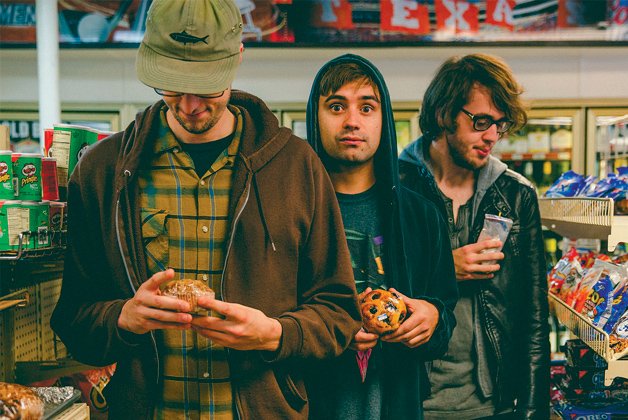 He’s right. The garage punk trio have downsized from a four-piece, and still, listening to their new album, Here And Nowhere Else (Carpark), you’d swear there’s more to it than Baldi’s singing and guitar, TJ Duke’s bass and Jayson Gerycz’s absolutely ferocious drumming.

I’ve reached Baldi over the phone in Cleveland, Cloud Nothings’ hometown, after the band’s very successful, and much talked-about, SXSW stint – four shows, including a killer SPIN magazine showcase that I attended.

Their sound was even bigger live, and they stood out on a completely stacked bill.

“We played right after Schoolboy Q,” says Baldi, laughing. “That was cool. It would only happen at, like, a fake Disneyland carnival world and SXSW.”

After that, plus the 10 days he spent in L.A. this month working on a joint project with Wavves, Baldi’s home for a few days before a lengthy North American tour begins. Then, it’s summer festival dates in Europe. The band is used to it.

“For our last record, Attack On Memory, we toured for almost a year and a half without stopping. I don’t recommend that to anybody. You really feel like a strange shell of a person at the end of that, but, you know, it’s a good experience,” he says.

Luckily, Baldi, the songwriter, is good at scribing on the move.

“Every song on this record was started while we were on the road,” he says. “I came up with the beginning of each one while we were wandering around the world, but the actual creation of the full product happened in the month leading up to recording this past September.”

With new producer John Congleton on board, Here And Nowhere Else turned into the band’s most fine-tuned effort to date. It’s hook-filled punk all the way through, but with small surprises to keep you on your toes: the tempo change that smacks you a minute into Quieter Today the epic seven-minute, off-tune dissonance and thunder drums of Pattern Walks and the power anthem gift that is the album’s last track, I’m Not Part Of Me, which might prove to be their biggest song ever.

And always, the noise.

“We’re insane,” says Baldi. “If I listened to it, I probably wouldn’t believe it either, but everything on the record is almost completely live, you know?”