YOUNG EMPIRES at The Great Hall. Rating: NNNNThe CBC/Windish party peaked early thanks to a fun, high-energy set by quickly-rising. 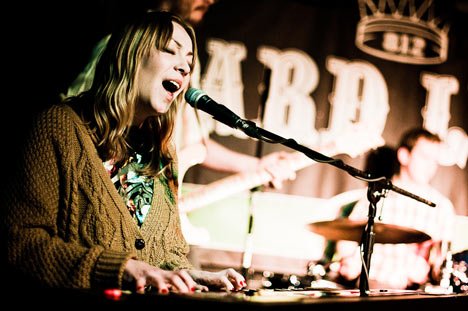 The CBC/Windish party peaked early thanks to a fun, high-energy set by quickly-rising Toronto synth rockers Young Empires. The trio’s glossy blend of retro post-punk and thumping electro is pretty much the perfect pump-up music for a fun night out. Bodies were moving on the dancefloor, and everyone sang along to the uber-infectious chorus of Rain Of Gold, their hit-in-the-making. The band, who are now off jet-setting between a string of U.S. dates, have a full-length in the works, and interest from major labels.

In a haze of possibly unwanted dry ice, Vancouver four-piece Sun Wizard kicked out melodic jams at the first of their two CMW showcases. Their woodsmen-chic vibe and laid-back, classic-rock-inspired sound evoke Yukon Blonde, but heavy doses of Strokesy guitar riffery and syncopation add a contemporary twist. Surprisingly, each time talented co-singer/guitarist James Younger offered up amusing banter, out came an English accent. For real? Their publicist confirmed it is, indeed. Watch for their debut album, out March 29.

Modern Superstitions have been around for a couple of years and they wooed the crowd that grew steadily throughout the band’s early set. Their sound is a distinctive blend of 60s girl group drama with new wave fun. But while singer Nyssa Rosaleen has a sugar-and-sandpaper voice that makes the hair on your arms stand on end, there’s an occasional hesitance to her delivery that holds her back. This is a really good band that could be incredible.

Few bands in Toronto bring as much energy – and volume – to the stage as Metz. Even with sound problems that made the vocals all but inaudible, the trio had the audience on its feet and moving throughout its brief, brutal set that left em wanting more. The beauty of Metz is that their songs are well-crafted and hook-filled, providing a structure for all that face-melting feedback.

LAKE OF STEW at the Dakota Tavern. Rating: NNNN

Not a single patch cord or DI was in use as six-piece Montreal bluegrass bliss team Lake Of Stew sang songs about buses, love and graffiti to an enthusiastic crowd at Dakota. The bandmates took turns leading, with scrappy-voiced Richard Rigby and near-yodeler Brad Levia often at the helm. Sweet As Pie producer Ken Whitely guested on mandolin and a maple syrup jug, and washtub bass player Julia Narveson’s old timey voice shone on Hey Bully. The Dakota asked them to play an encore at 3.

Toronto singer songwriter Julie Kendall (aka 1977) put out a great album of sunny Beach Boys pop last year that snagged her a Juno nomination, despite floating below most people’s radar. She’s about to put out a new album, and judging from the sound of her new band, we can expect it to be more surf rock than surf pop.

Too bad the horrible sound mix buried both her vocals and keys for the whole set, as the little we could hear was quite promising.