NOW MagazineNewsCoat of many mottos

Coat of many mottos

The origin of "Diversity Our Strength" 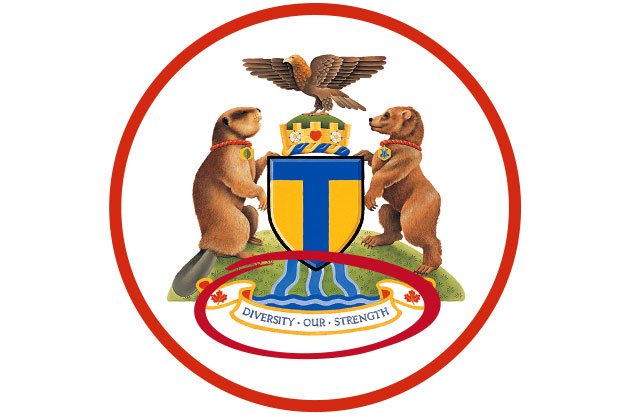 The phrase “Diversity Our Strength” first appeared in the Star in an article titled Bear, Beaver Called Too Fat.

In 1998, the cherished motto that has shaped so much of Toronto’s aspirational discourse was just one element of a proposed coat of arms whose design was micromanaged by finicky councillors.

The former municipalities of Metropolitan Toronto had just been amalgamated, and new civic branding was needed. Globe columnist John Barber described the process as “typical of so much megacity business – pointless but necessary.”

The city commissioned the chief herald of Canada to produce a new coat of arms, and on Tuesday, May 5, at 11:30 am, the Strategic Policies and Priorities Committee was shown the proposal. They hated it.

“I think this thing is nuts I think it’s terrible,” said Councillor Tom Jacobek, quoted in the Star.

The design, featuring what the paper described as a “pair of cat-like mythical beasts,” was rejected and sent back, along with the instruction that public input be sought.

The following week, Mayor Mel Lastman attended a cities conference in Birmingham, UK, held in conjunction with the 24th G8 Summit. “Diversity is our strength,” the Star reported Lastman explaining to the other mayors present, in describing what worked about Toronto. “We learn from each other, and benefit from the accumulated wisdom of our diverse cultural backgrounds.”

He deployed the phrase again the next month, when launching a series of public consultations to be conducted by council’s Task Force on Community Access and Equity.

In July, the city posted a survey about the coat of arms on its website and distributed copies through libraries, community centres and other civic buildings. Among the questions: “What should be the motto for a new Toronto?”

The city received 1,105 responses the Star’s Royson James cobbled together a column from the lowlights, including “Growing Together, United by Our Differences” and the simple but elegant “Resistance Is Futile.”

When a revised coat of arms flanked by a beaver and bear was presented to councillors in the fall, they were given a choice of six mottoes: “Diversity Our Strength,” “Stronger in Unity,” “Strength in Diversity,” “The Meeting Place,” “Home to the World,” and “A New Destiny.”

“A motto can be simply descriptive (reporting a fact),” wrote Daphne Gaby Donaldson, the city’s chief of protocol, “but if it can be allusive (conveying an inspiring thought) it seems to invoke greater interest and have a longer staying power. The motto shown here [on the mock-up] is allusive: Diversity Our Strength.”

Her report contained no explanation of the intended meaning, but did say of the beaver’s collar that “the intertwined strands speak of the added strength each has when working together, suggesting the emergence of strength out of diversity as an idea for the new City.” The bear wore a similar accessory, “showing its common purpose with the other, very different, supporter.”

At committee, when the choice came down to “Diversity Our Strength” or “The Meeting Place,” Kyle Rae informed his colleagues that the latter reminded him of a “sex chat line.”

“Talk about having a chilling effect,” James wrote. “‘The Meeting Place’ was doomed after that.”

The committee recommended “Diversity Our Strength” [pdf, p.4] by a vote of seven to five. Rae, according to the Globe, “added that the most appropriate way for Toronto to see its future was that the city’s strength comes from its diversity.”

Ahead of consideration by the full 57-member council, the Star solicited readers’ feedback.

“In the first place,” complained one person, “it isn’t true. Diversity does not create strength. It creates weakness.”

During the council’s two-hour debate [pdf, p.31], Michael Prue moved that “Diversity Our Strength” be scrapped for “The Meeting Place,” Raymond Cho put forward “Home to the World,” Norm Kelly wanted “Civility Our Strength” and Doug Holyday asked his colleagues to support “The World’s Meeting Place.”

In the end, none of those motions passed, nor did attempts to replace the bear with a red fox or the animals’ intertwined collars with the symbol of the old Metro.

The following January, the access and equity task force tabled a draft of its thick report laying out a blueprint for addressing “the barriers faced by women, people of colour, Aboriginal people, people with disabilities, lesbians, gays, bisexual, transgendered, immigrants/refugees, [and] different religious/faith communities” [pdf]. They called it Diversity Our Strength.

According to the city’s website and other official materials, however, the motto does not refer to diversity in the above regards but rather just to “the combined strength of seven municipalities.” Asked for evidence to support this interpretation, the city’s protocol office was unable to turn up any records.