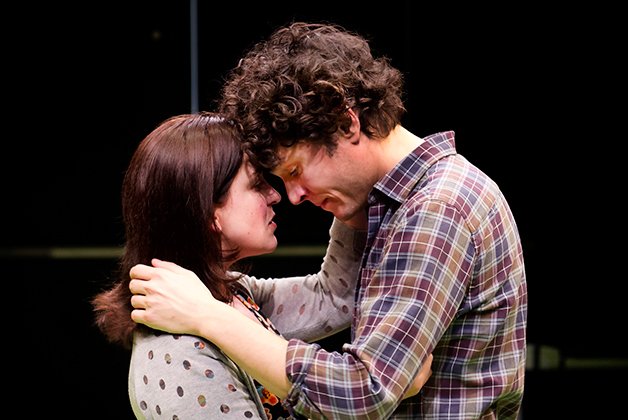 Its look at sex, relationships and the fluidity around labels is very timely, but a bit more weight would have given the script a tougher punch.

After breaking up with his long-term boyfriend, gay 20-something John (Andrew Kushnir) meets a woman identified only as W (Jessica Greenberg) and eventually has sex with her. He returns to his boyfriend, M (Jeff Miller), but can’t decide whom to stay with. Eventually, a dinner involving all three and an unexpected guest ensues.

Without props and using only the ding of a boxing match bell to mark off scenes, the show consists mostly of one-on-one skirmishes as the characters attempt to find each others’ weaknesses and execute verbal jabs. There are lots of clever lines, and the actors are excellent. Kushnir is charming and believably indecisive, while Miller’s intense, frustrated M and Greenberg’s controlled, precise W make worthy competitors. Ian D. Clark’s smooth-voiced F adds another layer of complexity near the end.

Joel Greenberg’s direction is sharp and vivid on John Thompson’s set, the floor a green square resembling a fighting ring in which the characters often stare each other down. (The audience sits in the round, as in a real cockfight.)

But there’s a feeling of emptiness to the show, and it’s worth comparing it to British writer Duncan Macmillan’s Lungs, which was recently mounted at the Tarragon. That play also consisted of a series of quick scenes chronicling shifting relationship dynamics. But his characters and their lives had a depth and history that made their battles (and makeups) more involving.