Bands and venues withdraw from festival, scheduled for March 10 to 12

The inaugural HiFi Musical Adventure festival for emerging Toronto bands was supposed to take place March 10 to 12 at various downtown venues, but a controversy involving one of its two organizers has torpedoed that plan.

Last week HiFi’s Anthony Dell’Orso made the since-deleted post on his personal Facebook page: “Fuck Kesha. Talentless hack with a penchant for drama.” After local musician Desiree Das Gupta shared it with a secret Facebook group for Toronto women musicians, Dell’Orso allegedly began sending harassing messages to her and at least one other woman.

By the end of last week, several venues and bands had withdrawn from the festival, including the Silver Dollar, the Old Laurel and Toronto’s Specifics.

“We can no longer, in good conscience, be associated with an event that is also associated with someone who thinks these are fair, reasonable things to be doing,” said Specifics in a public Facebook post. 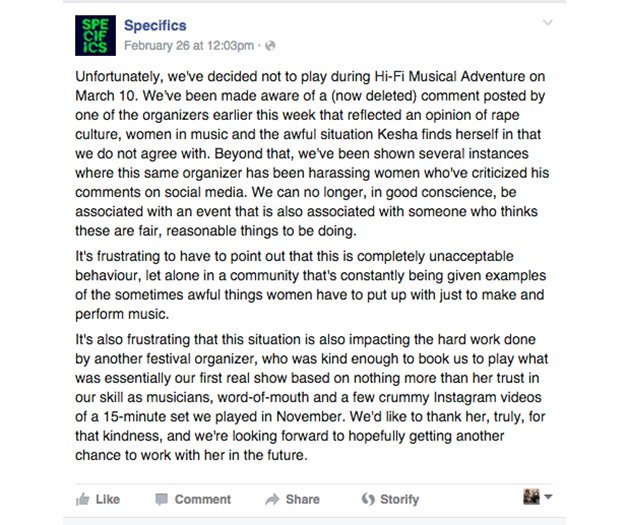 Meanwhile, the Silver Dollar’s Dan Burke and the Old Laurel’s Michelle Puska have rejigged the lineups and, with support from the bands set to play there from Thursday to Saturday, are going ahead with the shows, minus the HiFi affiliation.

On Monday, February 29, co-organizer Amanda Langton told Chartattack.com that she was no longer working with Dell’Orso and was trying to “lessen the blow to the bands being affected by this. I don’t know what that’s going to look like yet.”

But on Tuesday, March 1, Langton called off the festival completely. “It was a tough decision for me but ultimately for the best,” she wrote in an email to participating bands.

In a Tuesday statement to Billboard.com, Dell’Orso wrote, “What Kesha is going through is horrible and the deal that she signed is a form of slavery. I never meant to make light of the situation having to do with the allegations surrounding her and Dr. Luke.

“I did a stupid thing posting what I did in the first place and the events that followed….”