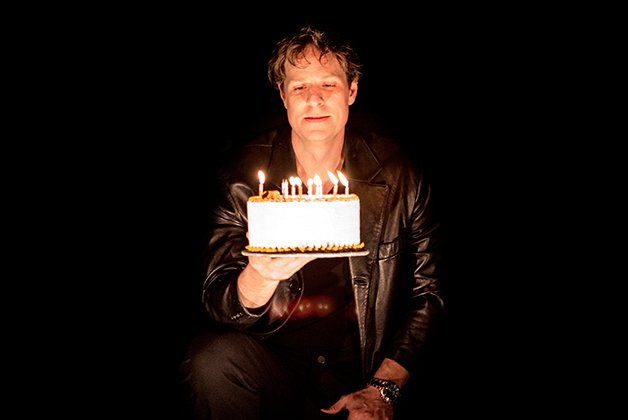 Dan Chameroy gets his just desserts in Company.

Company contains some of Stephen Sondheim’s sharpest and cleverest songs, but Theatre 20’s revival of the 1970 musical is a blunted, stop-and-start affair.

Part of the problem is George Furth’s episodic book, which finds commitment-phobe Robert (Dan Chameroy), prompted by his 35th birthday, interacting with his married friends – who all want him paired off though they’re unhappy themselves – and three single women also looking for love.

The scenes feel a lot like sketches, and dated ones at that. Plus, there’s often a disconnect between what we’re hearing and seeing.

The costumes are contemporary, but the lyrics reference antiquated things like phone services. Being single at 35 isn’t a such a big deal today, and neither is being gay – although an awkward moment between Robert and one of his married friends suggests otherwise.

Director Garry Griffin does little to make the piece coherent. It doesn’t help that many of the actors playing long-term couples lack chemistry together. Ken MacDonald’s set suggests a cocktail lounge where the actors, when not in the spotlight, watch from tables. This adds nothing to the show.

And the potentially intriguing idea of having Robert take photos of his friends – so he can witness their so-called marital bliss? – is brought up by Griffin early, then abandoned.

Thankfully, most of the musical scenes shine. Carly Street handles the huge demands of the patter song Getting Married Today – about a woman with cold feet on her wedding day – with jaw-dropping accuracy and believable comic hysteria.

And Louise Pitre’s delivery of The Ladies Who Lunch – about an aging society woman who drinks and judges everyone around her – is a little four-minute play: with each phrase, her character sinks deeper into drunkenness and self-loathing.

Pitre plays the scene after that famous song brilliantly, too, staring down Robert with inebriation and lust.

At the centre, the strong-voiced Chameroy grasps Sondheim’s cynical sentiments, but isn’t always convincing as the third wheel in his married friends’ lives. Griffin stages some of his numbers awkwardly: having him sing one to an empty seat or begin another crouched on the floor.

Musical director Scott Christian does a fine job with the complex score – re-orchestrated for five musicians – but while it’s nice to have the performers sing without mics, at times it’s hard to hear them, especially in group numbers.

This strong company deserves to be heard.