CONCORD FLORAL written by Jordan Tannahill, created by Erin Brubacher, Cara Spooner and Tannahill (Suburban Beast/Why Not Theatre). At the. 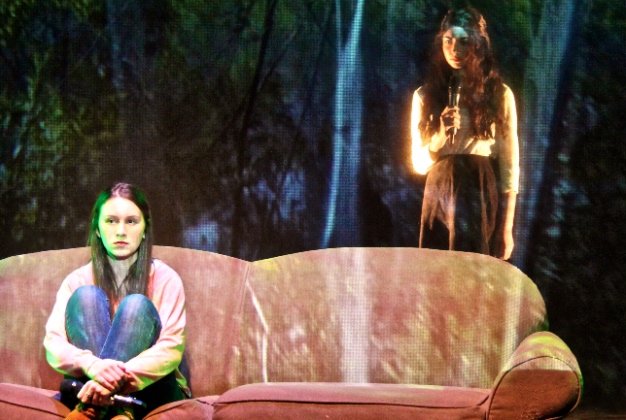 In shows like Post Eden, Jordan Tannahill proved that he really understands suburban teens. He returns to that rich source in Concord Floral, which, like Post Eden, masterfully blends naturalistic dialogue, poetic lyricism and magic realism.

Working with co-creators and co-directors Erin Brubacher and Cara Spooner, Tannahill plays out the anxieties and memories of 10 teens living near Concord Floral, a real-life abandoned greenhouse in Vaughan that became a party haunt for local kids. The script compares the building to the villa- in Boccaccio’s medieval book The Decameron, to which 10 young people flee to isolate themselves from the Black Death.

The parallels are clear, but in today’s world, the 10 are the cause of their own misfortune.

Part ghost story, part coming-of-age tale, part examination of school gossip and bullying, the show is buoyed by the writing and the performances of the young actors, who not only play the teens but also morph into various animals and birds (Eartha Masek-Kelly and Troy Sarju), a memory-soaked couch (Sahra Del) and even Concord Floral itself (Rashida Shaw), which bears oral witness to the past and present.

Focused and strong in their roles, the performers, named Teens One to 10, move swiftly from one episode to another, revelling in the discoveries their characters make and the eventual understanding of their actions’ consequences.

The central tale involves two friends (Jessica Munk and Erum Khan) and their involvement with a new student (Jovana Miladinovic), focusing on the seemingly inconsequential loss of a cellphone. Tannahill’s also written some powerful monologues for other characters: a queer guy’s (Liam Sullivan) attempts to connect with someone online and a self-exploring, sleep-deprived woman (Melisa Sofi), whose do-the-right-thing brother (Theo Gallaro) wants to protect her.

Staged in a field of grass with sharp, suggestive lighting by Kimberly Purtell (including clever use of iPhones) and an unsettling sound design by Christopher Willes that blends medieval chant, rasping crickets and ominous thunder, Concord Floral is an ensemble choral piece that packs a theatrical and emotional punch. Ending on an optimistic note, it’s also a fine showcase for a new generation of actors.