My primary focus on the job is. 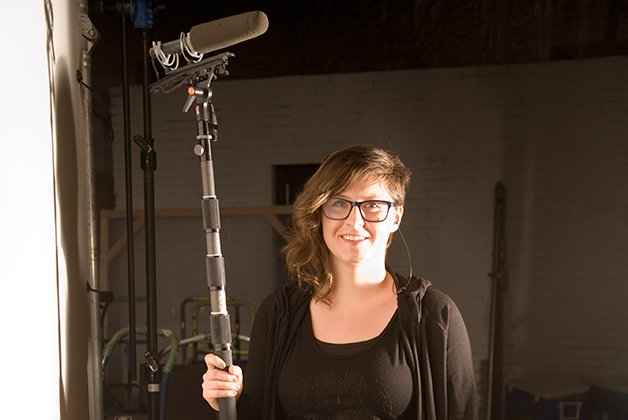 My primary focus on the job is to follow actors around the set with a boom pole and microphone. However, there are other aspects, too, such as wiring actors with radio mics and various other concerns with sound.

I’ve done smaller short films where I worked alone with a small mixer and recorder while also booming, but most of my work is on larger productions – either Canadian television or film. I’m in a two- or three-person sound team: a sound mixer, a boom operator and occasionally a second boom or sound assistant.

I went to Sheridan College for media arts, a film and television program. My education taught me that this career is possible. I originally wanted to be a camera person or an editor and hadn’t really considered sound. In the first year I had a sound class that I enjoyed, so took another in the second year, which is when I really took to it and decided to continue along with it.

In the second year of the program the class splits between narrative/dramatic and documentary production. The narrative production stream had 70 or 80 students, but documentary only had about 10. Two out of the 10 (including myself) did sound. Being in that class and having everybody need sound, with very few people doing it, was a eureka moment.

I’ve done a couple films in northern Canada around this time of year. Working outside for 12 to 14 hours at -25°C is probably the worst part of the job. School informs you that 12-hour days are typical in the film industry, but I don’t think anything prepares you for it until you’re on the job working those hours.

You can’t be an effective boom operator if you’re not paying attention and knowing what’s happening on set at all times. Things come up – lighting changes, actors might change a line – and you have to pick up on them because no one may alert you to those changes.

On the show I’m working on now, our second boom is also a woman, and that’s a very atypical situation. People comment on it because it’s unusual to have one female boom op, but we have two. I do get comments like “You’re the first woman I’ve ever worked with,” but over time it loses its novelty.

I graduated in 2007, which was a terrible time because of the financial crisis the next year. It can take a lot of time to get hired once you leave school. Many students have the impression they’ll graduate and immediately be doing their dream job. You can graduate and be incredibly skilled, but nobody might hire you for months or years. Some people handle that well, and some don’t handle it well at all.

Perseverance is important for anybody who wants to work in film.